“The darkness, destruction and death to Portland was a result of your failed polices and the lack of leadership.” 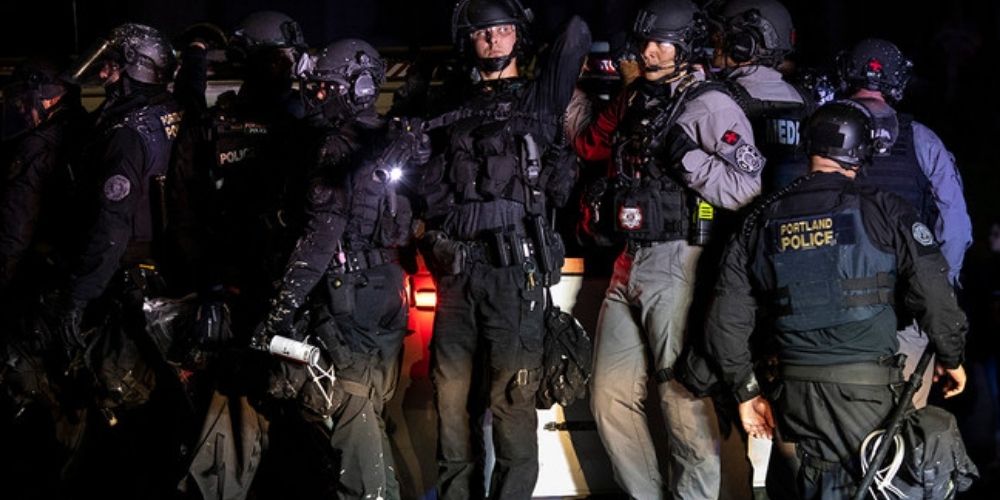 A Portland police officer that recently retired from the Portland Police Bureau was outraged upon receipt of  a letter from the department regarding their retire/rehire program and took the opportunity to respond with a scathing letter attacking the department's failed leadership and policies.

"I'm fully aware that command really doesn't care what I have to say, but I couldn't pass up the opportunity to say the things which I know my fellow officers still at the Bureau would say if they could," former police officer Stephanie Hudson told The Post Millennial.

The retire/rehire letter featured shocking reasons that disqualify officers from the program; including those that cooperated with federal agencies in Portland during the siege of the federal courthouse in July 2020 following the death of George Floyd.

However, the verbiage in the letter states that Portland police officers helped federal agents "attack" Portland residents, an allegation that officers find insulting because they were physically assaulted by Antifa militants and Black Lives Matter rioters for months.

"Dozens of officers were injured, and some were even set on fire... I had assumed the Bureau would know better than to send such an insulting letter to me," Hudson said.

Hudson, who served the Portland community for 26 years, believes that the department sent the letter in error and took it as an opportunity to send a truthful response to PPB Chiefs regarding the current state of the collapsing Department.

Hudson explains that the Portland Police Bureau's lack of leadership attributed to officers leaving the department in droves and called out the Mayor, City Council, and the District Attorney for refusing to take action against Antifa extremists that led to the "death of Portland."

The letter reads as follows:

"I can only assume that the letter regarding the retire/rehire program was sent to me in error. An officer of 26 plus years does not resign months before they are eligible to retire to go to another police agency where they take a pay cut and lose seniority unless it is pretty awful where they were at.

"Your letter states, 'You left at a time of great despair for the Bureau and the City of Portland, 2020 became a perfect storm that thrust our Bureau and the City into a very dark period.' This sounds as if you feel that those who left, abandoned the city in her time of need, but in reality, it is the officers who were abandoned. The darkness, destruction and death to Portland was a result of your failed polices and the lack of leadership. The 'perfect storm' of which you speak was the demonization of police by the Mayor's office and City Council members, and the failure of PPB leadership to stand up to them in support of their own officers.

"Your letter mentions 'considerable support from elected officials.' This is laughable. Portland has a Mayor who refuses to call out ANTIFA and condemn the riots, a DA who refuses to prosecute violent rioters and a Council Member who accuses police of committing the arsons and violence that were committed by the rioters. All of these previously mentioned people blame 'right wing extremist' and the police for the violence and destruction in Portland. Do you recall Marquise Love? Love repeatedly punched and then kicked a man, with whom he had no beef, in the head, leaving him unconscious in the street. It's a miracle that he didn't kill that man. Yet he received a mere 20 month sentence of which he will probably only serve a year.

"Out of the 1000 plus arrests made during the riots, probably only 10 percent were even prosecuted. Is that the 'considerable support' of which you speak?

"The one obvious sign that nothing has changed is the statement that the City will disqualify rehire candidates for 'cooperating with federal agents to attack Portland residents.' That statement is beyond offensive. Those federal agents responded out of necessity to protect an occupied court house that was under attack, because the Mayor wouldn't allow PPB officers to do it. It was the federal agents, local law enforcement and actual citizens of Portland who were being attacked by ANTIFA. Citizens with political and religious beliefs that oppose ANTIFA and those who are in positions of power in Portland are left to fend for themselves. Just ask Andy Ngo.

"Meanwhile, the Mayor was more concerned about punishing the Feds for blocking the bike lane next to the court house.

"By 'cooperating with federal agents,' are you referring to those PPB officers who were given federal credentials? Those federal credentials were necessary to arrest the most violent of offenders in hopes those offenders would remain in federal custody, as opposed to booking them into the Multnomah County Jail where they would be released the same night and immediately commit more crime thanks to DA Schmidt.

"ANTIFA became so emboldened with the lawlessness that was embraced by our city leadership that they actually began hunting and murdering people. Of course, one of the murder victims was deemed a 'right wing extremist' and 'Trump supporter' so no big deal right? Thank God for those Federal Marshals who sought to bring that victim's murderer to justice.

"Each of your signatures on that rehire letter is an endorsement of the statement that federal agents attacked the residents of Portland. I don't know how else it can be interpreted. If you don't agree with that statement, it says more about you that you still willingly signed that letter on January 6, 2022.

"I don't presume to speak for other officers, but I can tell you that your letter was not well received. It has been described as 'tone deaf.' You might have had more luck had you acknowledged the roles you, the Mayor and City Council played in the 'perfect storm' that thrust our city into a 'dark period.' Leadership is bigger than you as an individual, and sometimes it requires you to step out of your comfort zone to do what is morally right. It is more than a bump in pay and a better pension. You don't choose a leader because of the color of their skin. You choose them because they have proven themselves to be qualified. You don't force a woman, who was respected by her peers and worked her way through the ranks to become Chief, to resign because of the color of her skin. Do you have any idea what that did for morale in the rank and file?

"PPB leadership need leaders, not followers. Leaders who are willing to make sacrifices. Leaders who show their support for the men and women who work 24/7 to protect and serve its communities. Support that includes more than just the occasional pat on the back email for good work on some random call. Your letter indicates that nothing has changed. It simply highlights why those who could leave, did leave. I suspect it will take a decade or more to repair the damage that has been done. At this point, I would be more concerned about finding good people willing to make policing a career."

The Portland Police Bureau has been the model agency across the country for the Democrat's popular "Defund the Police" movement. City leaders slashed the police budget by $15 million in 2020 which has since resulted in record-breaking homicides and skyrocketing crime throughout the city.

As for Hudson, she decided to part ways with the department after being unfairly punished for using the precinct's gym to alleviate stress during the city's unprecedented 2020 riots that were perpetrated by Antifa militants.