GQ celebrates AOC as a hero for being a victim

Ocasio-Cortez, who is of Puerto Rican descent, had concerns about Roberts, her long-time partner, being white. 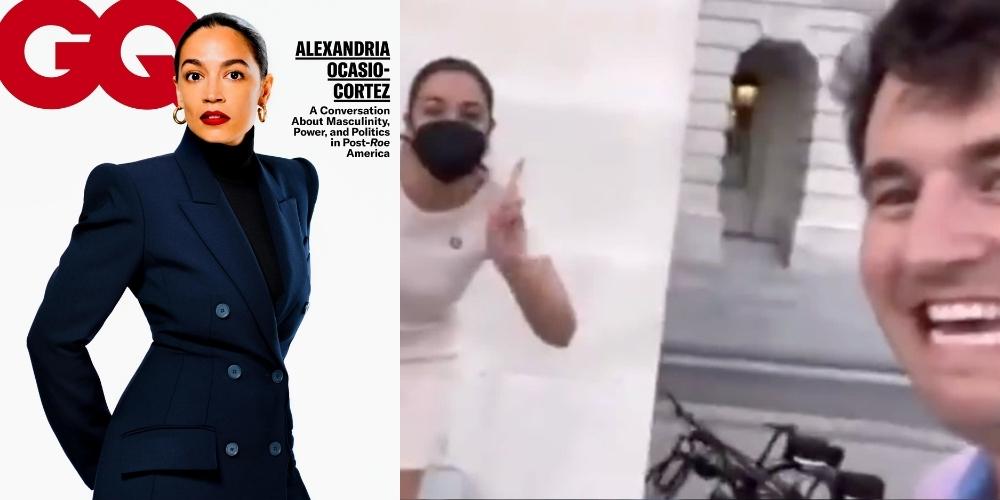 In a stunningly out-of-touch issue of the monthly men's magazine, GQ, progressive congresswoman Rep. Alexandria Ocasio-Cortez was asked about the patriarchy, running for president, and her love life with her fiance. She's unsure of having a future with due to his race.

"The right wing's night terror in the flesh," writer Wesley Lowery called the 32-year-old New York representative, after arguing that she is "more famous than any other person in American politics without the last name Obama or Trump," notably leaving out the current president and vice president.

Ocasio-Cortez, who Democratic Socialists of America calls a "socialist superstar," was commended by Lowery in the opening paragraphs of the article, where she was referred to as "A revolutionary on the rise. The clear heir to an ascendant progressive movement."

Despite being the "best" the progressive movement has to offer, she may also be the last according to GQ: "depending on how quickly some combination of fascism, religious fundamentalism, and climate change comes for us all."

GQ carefully constructed a heroic narrative surrounding Ocasio-Cortez's participation in protests outside of the Supreme Court following the overturn of Roe v. Wade, leaving out the part where she was led away by police officers while holding her own hands behind her back, uncuffed.

Why did she join in these protests? "It's really important for people to feel like their elected officials give a sh*t about them," the congresswoman replied.

Before going deeper into the interview, Lowery noted that mere days before the interview between Lowery and Ocasio-Cortez took place, she was "sexually harassed" by comedian Alex Stein.

"We discussed her three years in Washington, the hostile reception she says she still receives from colleagues, the misogyny and the abuse she endures," Lowery wrote. "Days earlier, a conservative comedian had sexually harassed her on the steps of the Capitol Building, and as we spoke, his leering video of the confrontation was still bouncing around the internet."

In her response to being heckled while walking up the Capitol Building stairs, she mentioned that she was going to "deck" Stein, because if no one would protect her, she'd do it herself. Her fiance, Riley Roberts, appeared to walk right past Stein and do nothing.

Of her relationship with Roberts, Ocasio-Cortez shared her doubts about the future, but not because of his inaction towards the "deeply disgusting" Stein incident, but because of his race.

"Late last year, Ocasio-Cortez and Roberts found themselves discussing their New Year's resolutions. Riley had a particular priority in mind. "It's my resolution that perhaps we can be engaged by the end of the year," she recalled him telling her, wrote Lowery.

Ocasio-Cortez, who is of Puerto Rican descent, had concerns about Roberts, her long-time partner, being white.

"She wasn't positive that an intercultural, interracial relationship would be the right fit for her," the magazine puff-piece read.

Per Gallup, 94 percent of Americans approve of interracial marriage, which made Ocasio-Cortez's opinion on interracial relationships while being a part of one turn heads.

"...who, besides AOC, would be given the benefit of the doubt when one considered such a question, said Charles C.W. Cooke of National Review. "I'm sitting here trying to imagine the reaction if, say, Senator Tim Scott had said that. Or Glenn Youngkin. Or Marco Rubio. Or anyone. They'd have been crucified."

Fox News host Jesse Waters also pointed out the insane hypocrisy in Ocasio-Cortez's statement, which was cheered on by Stein on Twitter.

In April, Roberts and Ocasio-Cortez ended up getting engaged after all.

In a passage about her 2018 triumph over NY-14 Democratic incumbent Joe Crowley, GQ described Ocasio-Cortez in biblical terms, as a "democratic-socialist David standing atop her Establishment Goliath, hoop earrings and a bold red lip in place of a shepherd's sling."

Despite the comparison to the religious story in which a boy slays a giant and her millions of social media followers, the politician told Lowery that she doesn't feel very powerful.

"Sometimes I don't feel powerful. Sometimes I feel very diminished, and sometimes I feel the least powerful here," she began. "...since I got here, literally day one, even before day one, I've experienced a lot of targeting diminishment from my party. And the pervasiveness of that diminishment, it was all-encompassing at times. I feel a little more steady on my own two feet now. But would I say that I have the power to shift the elected federal Democratic Party? No."

The writer recounted the "open hostility" to Ocasio-Cortez, writing about the time in May 2021 when Republican Rep. Marjorie Taylor Greene confronted her outside of the House Chamber on her support of "terrorist groups" like Black Lives Matter, which has reportedly financial defrauded contributors of millions.

"My everyday lived experience here is as a person who is despised. Imagine working a job and your bosses don’t like you—and the competing company is trying to kill you," bemoaned the congresswoman.

"Sometimes little girls will say, 'Oh, I want you to be president,' or things like that…It's very difficult for me to talk about because it provokes a lot of inner conflict in that I never want to tell a little girl what she can't do. And I don't want to tell young people what is not possible. I've never been in the business of doing that," Ocasio-Cortez said during the interview, beginning to tear up.

"I hold two contradictory things [in mind] at the same time. One is just the relentless belief that anything is possible," she continued. "But at the same time, my experience here has given me a front-row seat to how deeply and unconsciously, as well as consciously, so many people in this country hate women. And they hate women of color. People ask me questions about the future. And realistically, I can’t even tell you if I’m going to be alive in September."

"...and that weighs very heavily on me. And it's not just the right wing. Misogyny transcends political ideology: left, right, center. This grip of patriarchy affects all of us," she said gravely.

"Sure, Ocasio-Cortez's political project would see us fundamentally restructure our society. But is that any less realistic than the hope that we'll one day eradicate misogyny, racism, or homophobia? Are progressive fantasies about replacing our nation's guns and capitalistic greed with guaranteed jobs and health care any more far-fetched than the abolitionist's vision of an America without slavery or the suffragist's dream of a democracy in which her vote is counted?"