Wednesday night, Seattle police were called to investigate a death that witnesses described as "horrific" at Cal Anderson Park. The suspect is believed to be local homeless notable Travis Berge. 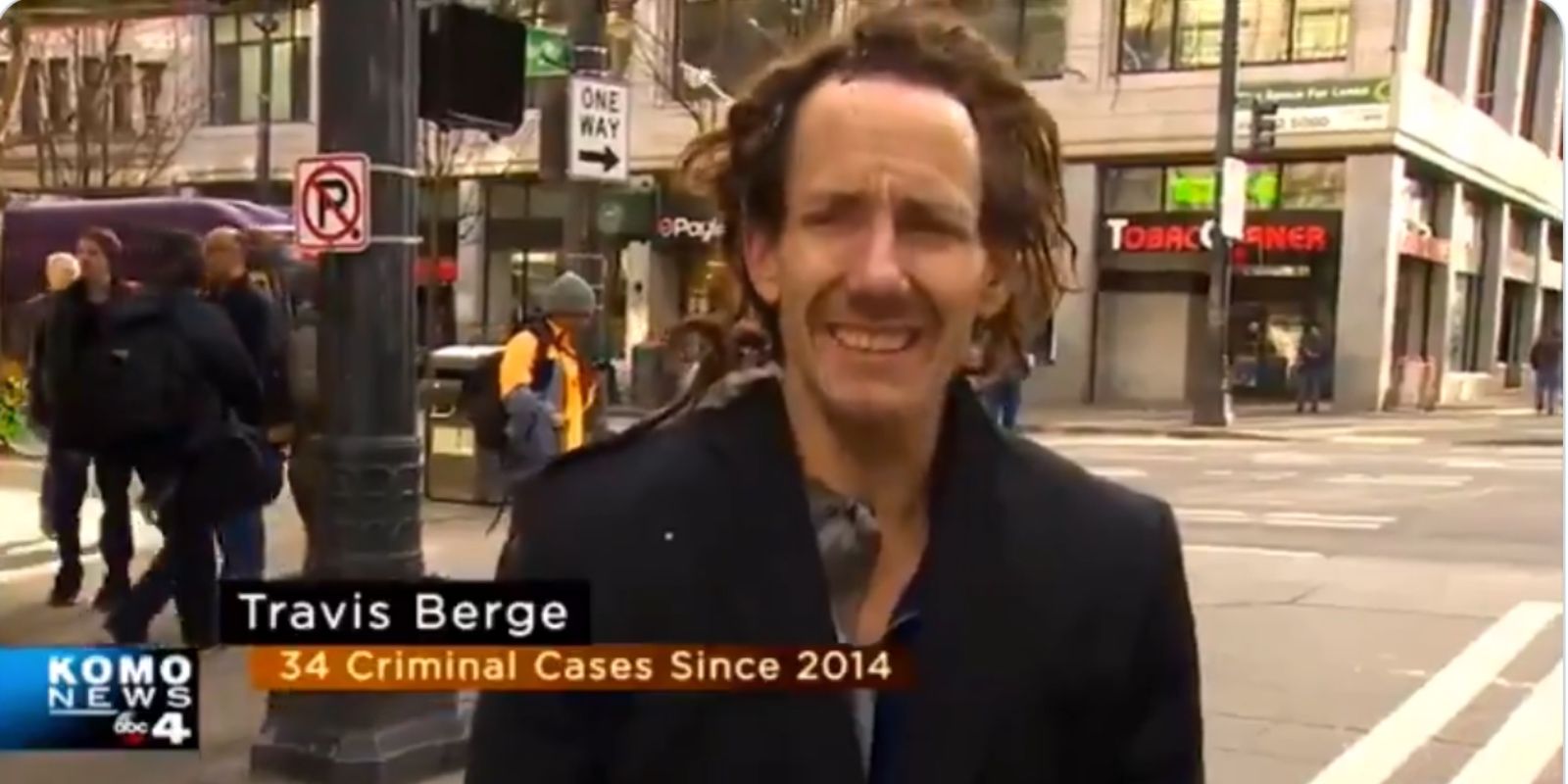 Wednesday night, Seattle police were called to investigate a death that witnesses described as "horrific" at Cal Anderson Park. The suspect is believed to be local homeless notable Travis Berge, though this is not yet confirmed by the Seattle Police Department (SPD). The identity of the victim has not been released.

Berge was reported dead this morning by SPD. SWAT officers reported that, after attempting to negotiate him out of the building where he was holed up, "SWAT entered the building and located the man unresponsive inside at the bottom of a 10 foot tank, which contained approximately 50 gallons of 12 percent bleach solution. The man was declared deceased at the scene. Seattle Fire responded back to the scene with a HAZMAT crew to assess the scene and assist the Medical Examiner with the body recovery. The recovery was processed and documented by Crime Scene Investigators and Force Investigation Team detectives. The Medical Examiner will determine the cause and manner of death."

SPD has announced that the incident is being treating as a homicide, and that the suspect barricaded in a building on the property. SWAT was onsite. Witnesses say that over 35 officers arrived at the park.

According to Komo News, Seattle Fire confirmed that the woman was 30-years-old and in a relationship with the suspect. First responders attempted life saving measures but were unsuccessful.

Video from the scene shows officers calling his name on Wednesday night. Officers attempted to communicate with the Berge, according to local reports. Berge was reportedly barricaded in a building in Cal Anderson Park where the body of the woman was discovered.

Berge's celebrity in Seattle stems from the release of a KOMO News documentary Seattle Is Dying. In four years, he has already had 34 arrests.

Berge came to the city from Reno, Nevada six years ago and lives on the streets. A meth user, he is identified as one of Seattle's "prolific offenders" who regularly terrorizes residents and businesses downtown.

Berge is regularly arrested then "diverted to treatment," a common practice in Seattle, but he does not appear for those services. Instead, upon release from law enforcement, he has continued to offend.

Berge was arrested during the Capitol Hill Occupied Protest (CHOP) for "failure to disperse."

As the occupied protest wore on, it deteriorated from an armed occupation to an armed homeless encampment attracting many of Seattle's chronically homeless.

Berge was open about his behaviour, including sharing details of how he beat his wife.

In May, he posted to Facebook that he was getting married.

A little more than a month before that, he posted his status as in a relationship with Lillith Samhein. Her last post was in March.

Berge has been a recognizable fixture in downtown Seattle since the release of the documentary.

Cal Anderson Park was raided two weeks ago when police discovered that Antifa rioters had been using the homeless encampment and a building on the property as a staging area for the riots. Rioters claimed there were just there to help the homeless. One person who claims to be affiliated with the movement posted on social media that they had "indirectly discovered his wife without a pulse," and stated that Travis had been "on a rampage."

The building the suspect barricaded himself inside of appears to be the same building searched by SPD during the raid and was found to have machetes, explosives, spike strips and shields bearing the logos of Antifa and BLM. According to the BLM account the suspect had been removed multiple times from the area by people "helping to feed the houseless" in the park.

Cal Anderson park has been closed since the dismantling of the CHOP and yet homeless tents litter the grounds and activists continue to use the park as a staging area. Last week security guards hired by Seattle to ensure the park remain empty were chased off by rioters after just a few hours on location.

Seattle's Law Enforcement Assisted Diversion (LEAD) program is the agency that diverts offenders to "treatment" rather than incarceration. Yet the LEAD program has failed to produce any data of it's "successes" since 2014 and still continues to receive increases in funding grants from the Seattle City Council.

Last year, mayor Jenny Durkan called for an audit of LEAD but was ignored and over ridden by the council. The Seattle attorney Pete Holmes and his staff is notoriously soft on crime and typically releases offenders sometimes, hours after an arrest. Seattle City Council member Andrew Lewis who previously worked for Holmes and released his share of the offenders, recently voted to cut funding for the Seattle Police Department and was among the council members who suggested replacing officers with social workers.

Businesses have been fleeing downtown Seattle in the wake of rising crime and nightly riots. Travis is one of the most recognizable perpetrators to business owners and residents.