I spent one day with Antifa in Portland

Donning what I had hoped would allow me to blend seamlessly into the crowd, I prepared for a day of marching amongst Portland’s Antifa activists. 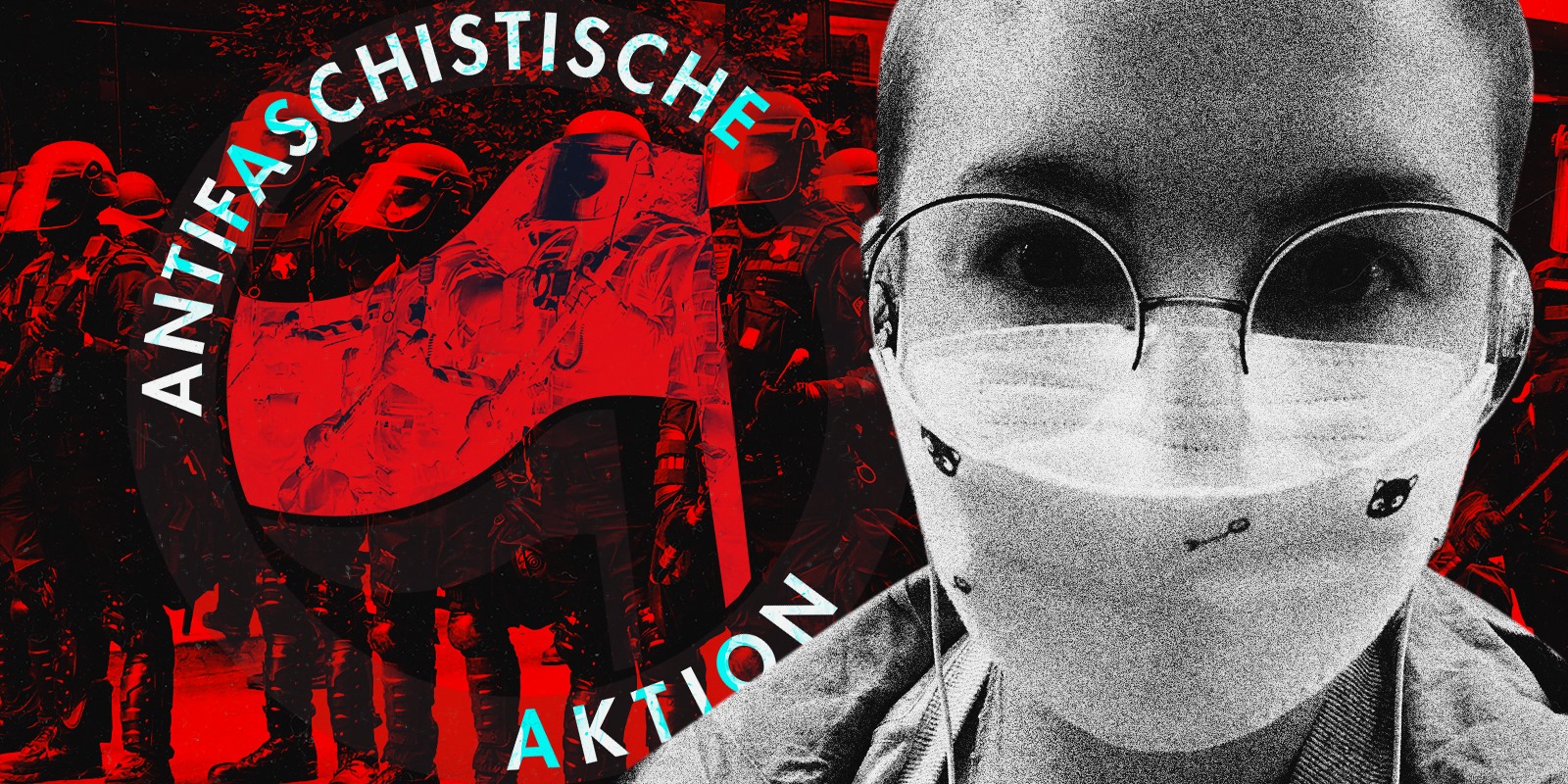 Walking through the crisp, clean streets of Portland on Saturday morning, nothing would indicate the kind of day it was going to be. Nothing, unless one looked for the signs—literal ones, hanging in the windows of businesses that would have normally been open.

“Dearest Customers,” the advertisements posted on every downtown Starbucks announced, “Due to strong encouragement from the Portland Police Department … We will be closed Saturday, August 17th.” And it wasn’t the only business that had shuttered their doors for the day.

Perhaps another strong indication was the fact that nearly every member of the press present at the Thomas McColl Waterfront Park was equipped with either a gas mask, a helmet, a bulletproof vest, or all of the above.

But even if I had wanted any of those things, I was out of luck. Donning what I had hoped would allow me to blend seamlessly into the crowd, I prepared for a day of marching amongst Portland’s Antifa activists.

Experiencing the full gauntlet of emotions and witnessing everything from the amusing absurdity of a dancing unicorn to the terrifying absurdity of riot police retreating under pressure, my 11 hours in the demonstration was a proper emotional rollercoaster.

Starting the day with Jewish prayers and Buddhist meditation, it would almost seem there was nothing to worry about. As the elderly female Abbots and Rabbis rang ting-sha bells and led prayers peppered with land acknowledgements and white guilt complexes, there was an eerie calm cast over the Portland waterside.

That calm was broken when a black cloud in the form of Black Bloc emerged in the distance, literally sweeping over the grounds and consolidating close by the ongoing preaching and chanting. It was as though an ink stain had been plopped on the cosmic map of the waterfront.

From that moment, a hurricane of explosive tension blew in. The calm was gone. Waiting began. And it didn’t take long for the tension to crack to the surface.

A small procession of Proud Boys marching through the park was met only with verbal confrontation from the left-wing demonstrators. But conservative independent journalist Brandon Brown was mobbed and pepper-sprayed after Black Bloc believed him to be associated with far-right activist Haley Adams.

Police were absent. And even had they not been, developments throughout the day would convince me they wouldn’t have been able to do much anyway.

The police consistently seemed unable to act. While their presence, most of the time, could not be denied, they were unable or perhaps unwilling to enforce the announcements bellowing powerfully over their loudspeakers. Forming impressive, armoured lines that led nowhere and did nothing, the activists quickly learned that there seemed to be no consequences to their actions.

A standoff in the street turned into an impromptu celebration, with a short line of riot police opposing well over one hundred activists who were skateboarding, meditating, and taking selfies of themselves flipping off the line. The police loudspeaker, roaring orders, seemed to take on an air of desperation in that moment—the words were the same, but they had been recontextualized.

Suddenly, the line began to back up.

The message on the police loudspeaker changed. From a demand to disperse, and a reminder that the road was open to vehicular traffic, to a request.

And it would not be the last time.

At one point after the civil disturbance had been called and protectors had been ordered to disperse, the police retreated, again to the vigorous applause and laughter of the protestors. The activists then took over large swaths of the Southwest, with the intersections of Yamhill and Park being completely lost.

A block party was thrown, with activists singing, sitting, and chatting in the streets with the casual vibe of a Saturday-night get-together. An ice-cream cart cycled through, and people stopped it for popsicles and cookie sandwiches.

When the “block party” was extended to Yamhill and Broadway, the next intersection, damage was caused. The police hadn’t closed off the street, so the presence of demonstrators spilling onto the roadways caused a cyclist to get into a serious accident.

Police’s attempts to keep the different political factions separated were also generally a pathetic failure. At one point, a group of five conservatives, one of whom was elderly, attempted to walk through the downtown area to a parkade. They were totally silent, and clearly trying to leave, but met with the overwhelming force of several dozen Antifa.

The elderly one had a full jar of mayonnaise crushed against his head, and his American flag ripped away and thrown to the ground. The police eventually intervened and created a short line between the two groups, but that line had a clear end that was easily circumnavigated. Antifa continued to chase the group to their car, until more police were willing to involve themselves.

Acts of violence and cruelty like this were not uncommon yesterday. I witnessed more than one individual rushed, pepper-sprayed, kicked, hit, or otherwise assaulted.

In the Southwest, two independent journalists were surrounded, their camera’s monopod seized and used as a baton to beat them. It is unclear what had set off the activist which rushed them and began to attack. No police intervened, despite them being nearby.

An altercation which stood out as particularly horrific was the mass mobbing of a man who was allegedly a tourist. The man had been taking photos of the demonstration, and that angered some of the more virulent Antifa who dislike photographic evidence of themselves at these rallies.

The man was punched, grabbed, threatened, and eventually, pepper-sprayed and egged. Followed for one block and being attacked for over seven full minutes, it was not until we reached an intersection that I was able to use my free arm to flag nearby police who used their bicycles to physically cordon him off to the opposite side of the street.

“I am not affiliated with any political movement,” he said to me, his face red from the mace, “I was just taking pictures because I was interested.”

As it turned out, he was pro-Antifa.

But if there is anything I have ever subscribed to in politics, it is the notion that while a small population of the loudest and most radical actors in any given political movement will come to define it, the vast majority of people in that movement are generally good.

Lost and separated from the main demonstration line, I hesitantly asked two Black Bloc for help. Congenially offering assistance, they personally escorted me to the area of town the line had marched to. Separated from their peers, even the small trickle of Proud Boys trickling past were ignored. In fact, what prompted more of a reaction from them was a group of journalists standing on the bridge we began to cross.

“Why don’t you ever tell the truth?!” One yelled at them as we passed, cautiously editing her statement, “Well, you might tell the truth—But then your editors don’t publish it!” In that moment, I marvelled at how similar the complaints about media were across the political spectrum.

Back at the main rally, after a man was attacked as a suspected fascist, pepper-sprayed at point-blank and punched, a few young, female Antifa medics attended to him, pouring milk into his mace-soaked eyes. When it was clear he was in obvious pain and his partner was distressed, the same All Cops are Bastards-chanting leftists started demanding the police cross the threshold and attend to him.

A stunning act of clarity came from a young black Antifa, who attempted to reclaim a MAGA hat seized by a white comrade. The red cap, seized in a vice-like grip between the two men, was struggled over endlessly.

“It is not yours.” He said, “What right [do you have] to take it off of someone’s head that does not see the same perspective?”

Surrounding Antifa encouraged the young man’s calm rationality, with one chirping, “I like this dude, he’s wise as f*ck.”

Even those activists who had demonstrated their cruelty at other points had moments of rationality. A Black Lives Matter protestor bonded with a white man who had crossed the demonstration line to declare “I love America!” in singsong. Perceived as a counter-protest, the activist confronted him, but rather than a fight ensuing, the two seemed to find common ground and shared a spirited high-five.

“If there’s one thing I get sick of…” the BLM activist said, “I know that our history shows that white people have fought, bled, and died along the side of black people.”

Highlighting and appreciating these moments of humanity is important, especially in a climate where hopeless pessimism permeates political discourse. It is not meant to suggest that genuine acts of badness do not and did not occur, or are to be dismissed or downplayed.

Often, it seems as though tight clasps on clear divisions between one side’s goodness and the other’s evilness are meant to serve a preservative function. As though admitting that your side may have done wrong, or the other side may have done right, somehow undermines one’s entire dogmatic foundation. This is a rigidity, ideological authoritarianism, antithetical to creating internal conditions necessary for external humane behaviour.

Keeping this in mind, I will defer to an earlier piece written by Siddak Ahuja and myself. Antifa, as good and well-intentioned as even a majority of them may be, have fundamental factional flaws that must be addressed if it wants to truly achieve the moral irreproachability it believe it currently has.

In my last moments, as the crowds finally dispersed, a black-helmeted Antifa, one I had captured on video encouraging police officers to commit suicide earlier, gave me the thumbs up and said, “Thanks for coming out.”

But no thank you.