Idiot dressed as the Joker steals tips from Toronto restaurant 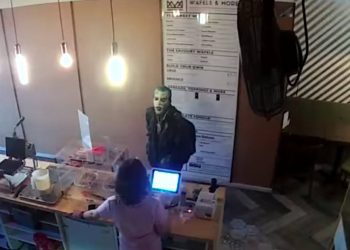 A grown man who decided it was a good idea to dress up as the Joker and rob a waffle restaurant was caught on tape earlier this week doing just that.

The video of the event, which was posted to Facebook, garnered a fair amount of attention for the unusual circumstances.

The video posted earlier this week shows security footage of the man with his face made up like the Joker walking into the restaurant, interacting with staff and then snatching the tip jar as soon as all eyes are off of him.

One comment on the video reads, “This painted face person hits up many places along Bloor West. He will attempt to enter ‘staff only’ areas and take whatever possible. He also does drugs in restaurant washrooms. Heads up.”

He says he’s going to screw the tip jar to the counter, since, with summer approaching, he anticipates this type of activity will only increase.

The store was hit last year as well, by someone caught on video stealing their tips.