“This is how the Prime Minister acted when an Indigenous woman was assaulted in front of him.” 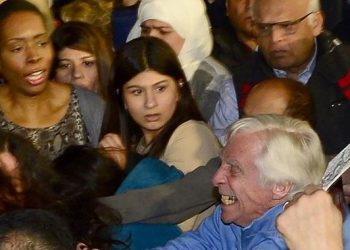 A young indigenous woman alleges that she was assaulted at Justin Trudeau’s climate change rally at the Danforth Music Hall.

A video of the event depicts an older man aggressively shoving Vanessa Gray, a member of Aamjiwnaang First Nation before she was removed from the event by security guards, while the suspected aggressor was allowed to remain.

“At around 8:15pm, there were a series of disruptions from  protestors. After two people who interrupted Trudeau’s speech were  forced to leave and as he continued to speak, I threw the flag into the  air and said, ‘No Justice on Stolen Native Land,” said Gray about the incident.

“The next thing I knew I was being thrown. As seen in the video of  the assault, the older white male who was standing in front of me turned  around, grabbed me by the arm, and threw me into the crowd of people.”

While the alleged incident took place Justin Trudeau remained on stage and didn’t intervene. According to Gray, she was abruptly removed from the Danforth Music Hall for protesting the environmental damage to native land.

“As for the man who assaulted me? He was allowed to remain inside of  the event to listen to the Prime Minister finish his speech,” said Gray.

“This is how the Prime Minister acted when an Indigenous woman was assaulted in front of him.”