It was widely reported that Meghan Markle visited Vancouver’s Downtown Eastside Women’s Centre on Tuesday. It turns out she didn’t. 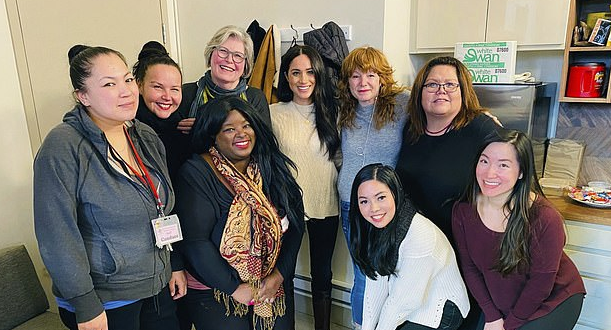 While it was widely reported that Duchess of Sussex Meghan Markle visited Vancouver’s Downtown Eastside Women’s Centre on Tuesday, it turns out she didn’t meet any of the women currently housed there. In fact, she only met with staff in their off-site administrative offices.

The feeling was that it would have been too hard to deal with the logistics of Markle visiting the centre. The trip to “boost the staff’s spirits” and “offer support” was Markle’s first public sighting since she announced that she was stepping down as a senior royal.

The meeting was intended to be low-profile, planned with only 24 hours notice. The reasons given for her not meeting any of the women in the Centre were security concerns since her Royal Protection Officers would not be allowed inside. Only women and those who identify as women are allowed within the centre.

Speaking in an exclusive to The Daily Mail, acting executive director Kate Gibson said: “It would have been a way bigger deal for her to have actually met our clients in a trip to the centre.” She was reportedly with staff for about an hour, and Gibson didn’t reveal to select staff who was coming in until the meeting was upon them.

Markle also visited Justice for Girls (JFG), a group that “promotes social justice and an end to violence, poverty and racism in the lives of teenage girls who live in poverty.” In speaking to Harper’s Bazaar, co-director of JFG said “We were struck by how engaged and informed she was on the issues we discussed, and how quickly and gracefully she put us at ease.”

The visits were arranged quickly, and Markle was widely praised for taking the time to meet with and boost morale for these groups. Gibson hopes that Markle will take further interest in the work she and her staff are doing.

Markle and her son have been staying in a mansion on North Saanich on Vancouver Island, and made the trip out Tuesday despite harsh weather conditions.