“We teachers are hiding important information about kids’ mental health from their parents. That’s wrong. Parents have a right to know." 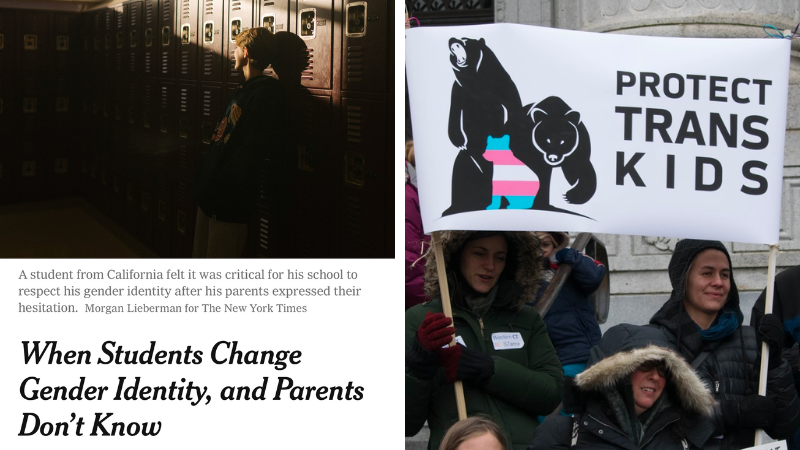 The New York Times has finally realized that something is amiss with the concept of the transgender child, and the response to a recent article about teachers allowing students to adopt new names and pronouns without parental knowledge or consent suggests that their readers agree.

An article published on Jan 22 told the stories of several families with children who had socially transitioned at school without the parents being informed. Most of the teenagers had coexisting mental health issues, such as bipolar or autism. Some parents were supportive, others were wary of medicalization and felt betrayed.


Some parents have filed legal action, arguing that the school district violated their rights as parents to make decisions about their child’s health. Dr. Erica Anderson, a trans-identified biological male and respected clinical psychologist who has treated hundreds of children with gender dysphoria, agrees with those parents.

“[Social transition] is a major and potentially life-altering decision that requires parental involvement,” Anderson wrote in an amicus brief filed in support of parents in Maryland taking legal action against their child’s school district.

“I don’t want to be erased as a transgender person, and I don’t want anyone’s prerogatives or identity to be taken away from them,” Anderson told the NYT, “but on this one, I’m aligned with people who are willing to advocate for parents.”

Many of the NYT readers align themselves with Anderson. Most of the top comments oppose teachers allowing children to change their name and pronouns without their parents being informed.

One teacher from New Jersey wrote that this year, school staff were instructed not to tell parents if their child asked to be referred to by a new name and pronouns or to use bathrooms for members of the opposite sex.

This teacher noted that after 15 years of teaching and having no transgender students, all of a sudden, over the last couple of years, there have been several. All were girls; all had serious mental health issues.

“I have a background in psychology,” wrote the teacher. “So my opinions on this issue are informed by data, not politics. I am certain that these girls’ mental health issues are the cause of their trans identities, not the effect.”

The reader went on to ask why, if the sharp increase in people identifying as transgender is because society is now safer, are we only seeing pre-teen and teenage girls affected?

“Social contagion of psychological symptoms among adolescent girls is a real phenomenon - DID and Tourettes on TikTok today, bulimia and anorexia in the 80s and 90s, Beatlemania-style fainting in the 1960s, “hysterical” disorders of the early 20th century - all the way back to the supposed possession of the Salem witch trials.”

“We teachers are hiding important information about kids’ mental health from their parents. That’s wrong. Parents have a right to know,” the reply concluded.

One of the reasons trans activist groups instruct teachers to withhold such vital information from parents is that the child could be at risk if the parents are not supportive. Another NYT reader objected to this line of thinking, arguing that if a school really does think the child is in danger, it is their duty to call Child Protective Services.

“As for teachers encouraging students to pursue medical treatment without their parents’ knowledge or consent, well, that’s inexcusable,” Liz added.

The opinions of teachers vary on this issue. Many liberal minded teachers see it as their duty to protect children from parents who might not instantly celebrate their child wanting to undergo an experimental sex change.

“My job, which is a public service, is to protect kids,” Garrison told the NYT. “Sometimes they need protection from their own parents. I had to look for parental figures in other people who were not my parents.”

However, not all teachers take this approach. Ms. Manchester, of Massachusetts, was fired for informing the parents of an 11-year-old who had requested the use of a new name and pronouns. Manchester lost her livelihood for disclosing “sensitive confidential information about a student’s expressed gender identity against the wishes of the student,” according to her letter of termination.

Manchester does not regret the action she took. “I shined a light on something that was in the dark,” she told the NYT. “I was willing to lose my job.

Many replies start off with the reader declaring a liberal political affiliation before expressing their discomfort at the overreach of such policies.

One such reply came from the New York parent of a “non-binary child.”

“It’s laughable that school administrators and counselors think that they can [make] more informed decisions than parents. Their overreach is disturbing,” said the parent, whose 6-year-old child was able to change gender identity at school without parental consent.

“While I knew my kid was changing gender ahead of time, I was not bothered by what the teacher said at first. But then think about… a school will let a 6 yo make major decisions without parents’ input,” the parent added.

“I don’t like de Santis at all and I will not vote for him, but he’ll win presidency on this issue alone. I don’t think my liberal friends understand how serious this issue is for many parents, even liberal parents.”
ADVERTISEMENT
ADVERTISEMENT
nyt trans kids