A Maryland teacher advises teachers to ask students for their name and pronouns at the start of term and stresses the importance of asking if the information students give can be shared with their parents. 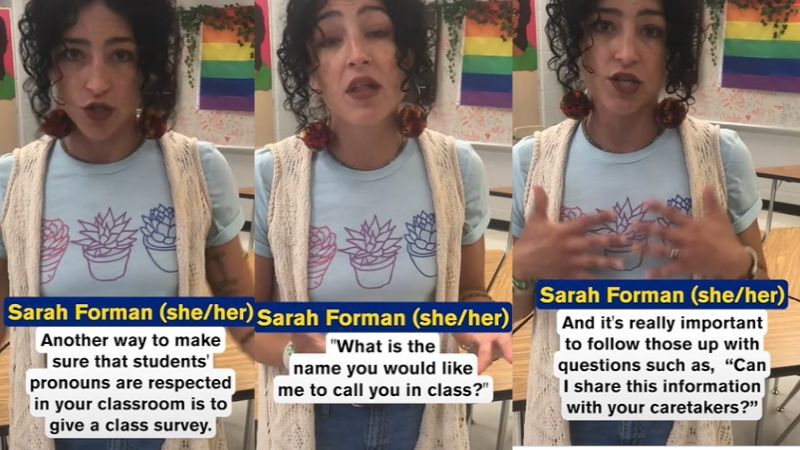 A Montgomery County Public Schools (MCPS) teacher recently made a video advising teachers on how to create an inclusive classroom in which she recommends asking all students for their names and pronouns at the start of term and stresses the importance of asking if the information students give can be shared with their parents.

Sarah Forman, a teacher at Montgomery Blair High School in Maryland, explains in the video that one way to make sure students’ pronouns are respected is to give a class survey on the first day, asking students for their legal name and then what name they would like to be called in the classroom. Forman emphasized that it is “really important to follow those up with questions such as, can I share this information with your caretakers?”

The Montgomery County Public Schools require that their teachers undermine the rights of parents in this way.

The MCPS 2022-2023 Gender Identity guidelines informs teachers that it “is critical that all MCPS staff members recognize and respect matters of gender identity; make all reasonable accommodations in response to student requests regarding gender identity; and protect student privacy and confidentiality.”

“Prior to contacting a student’s parent/guardian, the principal or identified staff member should speak with the student to ascertain the level of support the student either receives or anticipates receiving from home,” the guide continues. “In some cases, transgender and gender nonconforming students may not openly express their gender identity at home because of safety concerns or lack of acceptance.”

Montgomery County Public Schools don’t just require that their teachers deceive parents by withholding vitally important information about their child’s health from them. They also have a policy that allows students to choose which locker room they wish to use, meaning a male student who identifies as a girl could use the female locker room. If adolescent girls going through the embarrassing life event that is puberty feel uncomfortable with a male student in their private spaces, the MCPS solution is to send them for counseling so they can “foster understanding of gender identity.”

Changing names and pronouns to align with a person’s gender identity is called social transition, and it is touted by many trans activist groups as a harmless, non-medical step to alleviate a gender dysphoric person’s suffering. But many experts now believe that it is a powerful psychotherapeutic intervention that helps to lock the transgender identity into the child’s mind, making medical transition almost a foregone conclusion.

Dr. Hilary Cass, former president of the Royal College of Paediatrics, said in the interim report of her independent review of the soon-to-be-closed Tavistock gender clinic that “it is important to view [social transition] as an active intervention because it may have significant effects on the child or young person in terms of their psychological functioning.”

Parents are starting to take legal action against the schools that socially transitioned their children without even their knowledge or consent, setting them on a pathway towards major medical interventions such as puberty blockers, cross-sex hormones, and bilateral mastectomies.

A Wisconsin family recently announced they are taking legal action against the school board for violation of their parental rights after their daughter’s middle school allowed her to adopt a male name and pronouns against their wishes. After removing their daughter from the school, she has since desisted and no longer desires to medically alter her body.

The practice of deceiving parents by withholding a gender-confused student’s change of name and pronouns is not limited to this one particular teacher. This is common practice in schools all over the US and Canada.
ADVERTISEMENT
ADVERTISEMENT
Sarah Forman MCPS