Jack Posobiec asked some pointed questions on Friday about why the US media is largely silent about the chaos erupting over the capture and extradition of Mexcian mafioso "El Huevo." 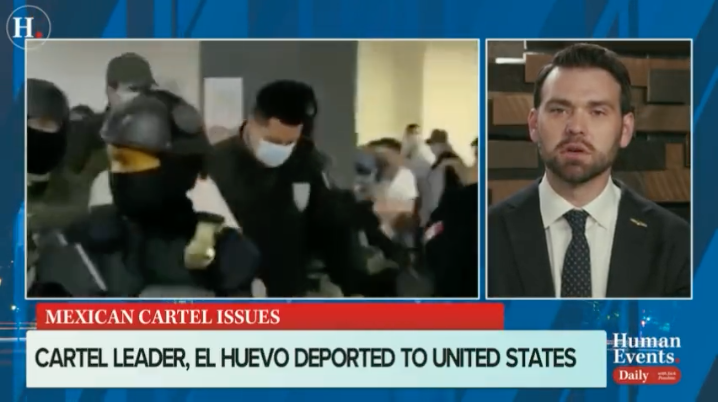 Human Evnts Daily host Jack Posobiec asked some pointed questions on Friday about why the US media is largely silent about the chaos erupting over the capture and extradition of Mexcian mafioso "El Huevo."

Posobiec noted on the show that mainstream media seems to be avoiding the story entirely, even though it's literally "five feet away" from US territory in some cases, and is having repercussions on the US side of the border as well.

"Juan Gerardo Trevino," aka "El Huevo", was arrested by Mexican authorities on Monday, and there have been violent retaliations by his fellow cartel members in Mexico since.

Posobiec comments, "In the country that no one is talking about, a cartel leader, the leader of the Northeast Cartel, Juan Gerardo Trevino Chavez, 'El Huevo' his moniker, captured in northeast Mexico, deported to the United States. A US consulate comes under fire."

"And yet, I look across media in the United States, I can't find a thing. You go to media in Mexico; they're all talking about this story. Huge, huge news."

Posobiec then made it clear how ironic it is that we could ignore something so big going on so close "... What blows my mind is, you see this level of cartel violence that's going on across the border ... a stone's throw from the US homeland. Not 5000 miles away, not 500 miles away, five feet away, five minutes away."

"... There is a cartel war that is going on right now in a narco-state directly to our south, and yet for some reason, you don't hear people talk about that."

Posobiec went on to draw the striking similarities between similar situations in countries such as Afghanistan and Ukraine, once again wondering why the severity of the situation in Mexico is so largely ignored in the US:

The situation in Mexico shows no signs of getting any more peaceful any time in the near future. Of course, while the capture of "El Huevo" is anticipated to strike a blow against the lawlessness in northern Mexico, there are plenty of other cartels out there still operating just south of the US border, and all over Mexican territory, with relative impunity.