James Lindsay locked out of Twitter for saying 'ok, groomer'

"James Lindsey got suspended from Twitter for calling me a groomer lmaoooo," Ari Drennen said on Twitter. 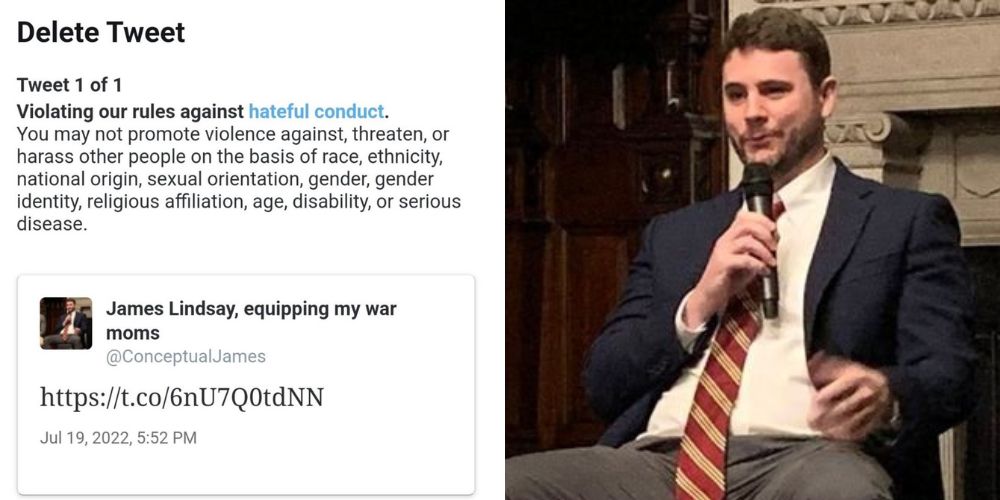 Author and mathematician Dr. James Lindsay was locked out of Twitter on Thursday for responding to a Media Matters journalist's tweet with the words, "ok groomer."

New Discourses, an apolitical educational site that Lindsay contributes to, announced that Twitter has locked Lindsay's account for 12-hours after the author violated its rules against "hateful conduct."

Journalist Ari Drennan of Media Matters called out The Daily Caller in a Tweet on Thursday for the outlet claiming to be "ant-pedophile" while using a picture of teens holding onto a Pride flag in an article.

Believing that Drennan's comments were terrible juxtaposition, Lindsay responded to her tweet with the words, "ok groomer," which resulted in a 12-hour suspension for "hateful conduct."

After learning about the suspension, Drennen took to Twitter to gloat that her comments were the reason Lindsay got suspended.

"I just wish Twitter would show the same energy when he targets the parents of trans kids and organizations like the Trevor Project," Drennan added.

The Media Matters journalist then commended Twitter for suspending Lindsay, and explained that she was glad to see the Big Tech giant finally take aim at "anti-groomers."

"Misusing 'groomer' to attack lgbtq people erases survivors of sexual abuse and is being used to incite violence against the LGBTQ community. Good to see Twitter finally starting to take this seriously," Drennan said.

Lindsay, who uses the name @conceptualjames on Twitter, boasts an impressive amount of more than 300,000 followers on Twitter.