"President Trump is the best friend Israel ever had in the White House," ZOA National President Morton A. Klein said. 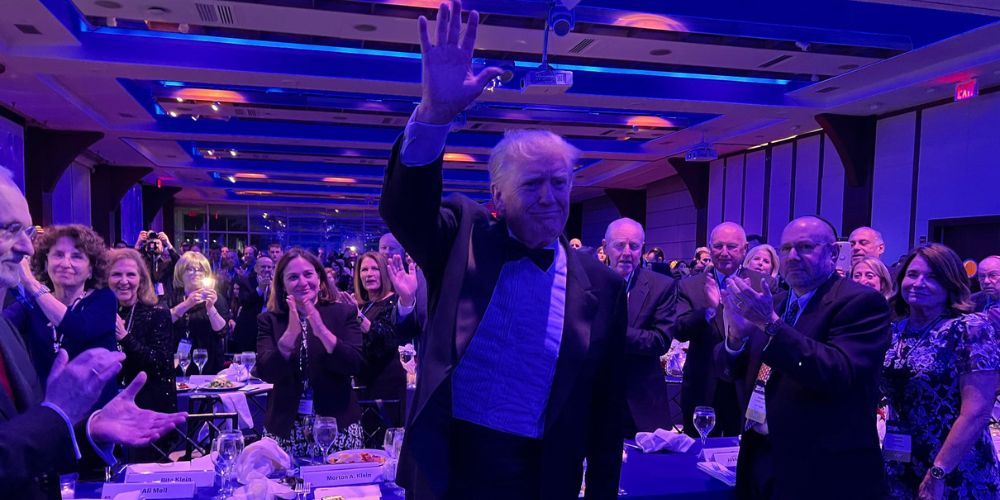 Trump received a warm welcome from the guests. Chants of "Four more years," rang out from the ballroom as the former president entered the banquet.

During his speech, Trump celebrated the “historic progress of working with both our Arab and Israeli partners” as well as the US military destroying the ISIS caliphate.

The former president also called out many American Jews who continue to vote for Democrats, and "not doing the right thing for Israel."

ZOA National President Morton A. Klein said when announcing the honor for Trump, "ZOA rarely awards the Theodor Herzl Gold Medallion. It has been presented only to other renowned world leaders and dignitaries like Lord Balfour, Winston Churchill, Harry Truman, David Ben-Gurion, Golda Meir, Menachem Begin, and Sheldon G. Adelson. As a champion of Israel and the Jewish people, President Trump is certainly worthy of being in that company."

"Simply put," Klein continued, "President Trump is the best friend Israel ever had in the White House."

"Forging the historic Abraham Accords—which established peace between Israel and Bahrain, the United Arab Emirates, Morocco, and Sudan—would, on its own, merit this honor," added ZOA Board Chairman David Schoen. "But President Trump has achieved so much more. Adhering to American law previously ignored by presidents of both political parties, he relocated the US Embassy to Israel’s eternal capital, Jerusalem. He strengthened legal protections for Jewish students on college campuses. He recognized Israel’s sovereignty over the Golan Heights and withdrew from the dangerous Iran deal. He acted on principle rather than politics by signing the Taylor Force Act and withdrawing from the UN’s so-called Human Rights Council, sending the message that Americans’ tax dollars will not go toward paying terrorists and antisemites. The list goes on and on."

During his remarks, Trump also weighed in on the ongoing war in Ukraine. "It would've never happened if I were president. The Russian invasion of Ukraine never would've happened."

He continued, "But the United Nation should be doing this stuff. This should never have happened. I know President Putin very well. I know Zelinsky very well, great relationship with him. And this would've never, ever happened."

"They don't say, when you go into a city and you obliterate it, you don't lose two people and you don't get a couple of people hurt. You lose hundreds and hundreds of people. Their numbers are far worse what you hear, but the United Nations has tremendous potential that they have to use it… and it could be that Taiwan is next."

"If you look at Taiwan and we look at what's happening with China right now, it looks like that's gonna be perhaps next, but it became nothing but a forum for the world's worst human rights abuses and to attack America and Israel, the only democracy in the Middle East."