“I would of course make myself available to the Committee if requested to give additional testimony, to answer any further questions, and to provide further clarity that may be required,” said Wilson-Raybould in her statement. 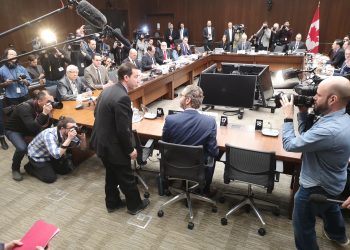 In a statement made by the former Justice Minister Jody Wilson-Raybould, she said she would make herself “available” for a further testimony if required by the justice committee.

During the committee meeting the Liberal majority voted against Jody Wilson-Raybould appearing and have delayed talking about the matter until March 19th, which is also coincidentally budget day for the federal government.

“I would of course make myself available to the Committee if requested  to give additional testimony, to answer any further questions, and to  provide further clarity that may be required,” said Wilson-Raybould in her statement. “My statement to the Committee was not a complete account but only a detailed summary.”

During today’s hearing several witnesses, including former Principal Secretary Gerald Butts and the Clerk of the Privy Council, Michael Wernick both offered testimony on the allegations of political interference in the SNC-Lavalin case.

Butts and Wernick contradicted the former Attorney General on several points including the content and timing of their alleged conversations.

During her prior testimony, Wilson-Raybould had accused members of the PMO of continued pressure to get her to intervene on SNC-Lavalin’s behalf.

In her latest comments, Wilson-Raybould pointed to the limits of her solicitor-client privelege and how she was limited to speaking only about what occurred during her time as Attorney General.