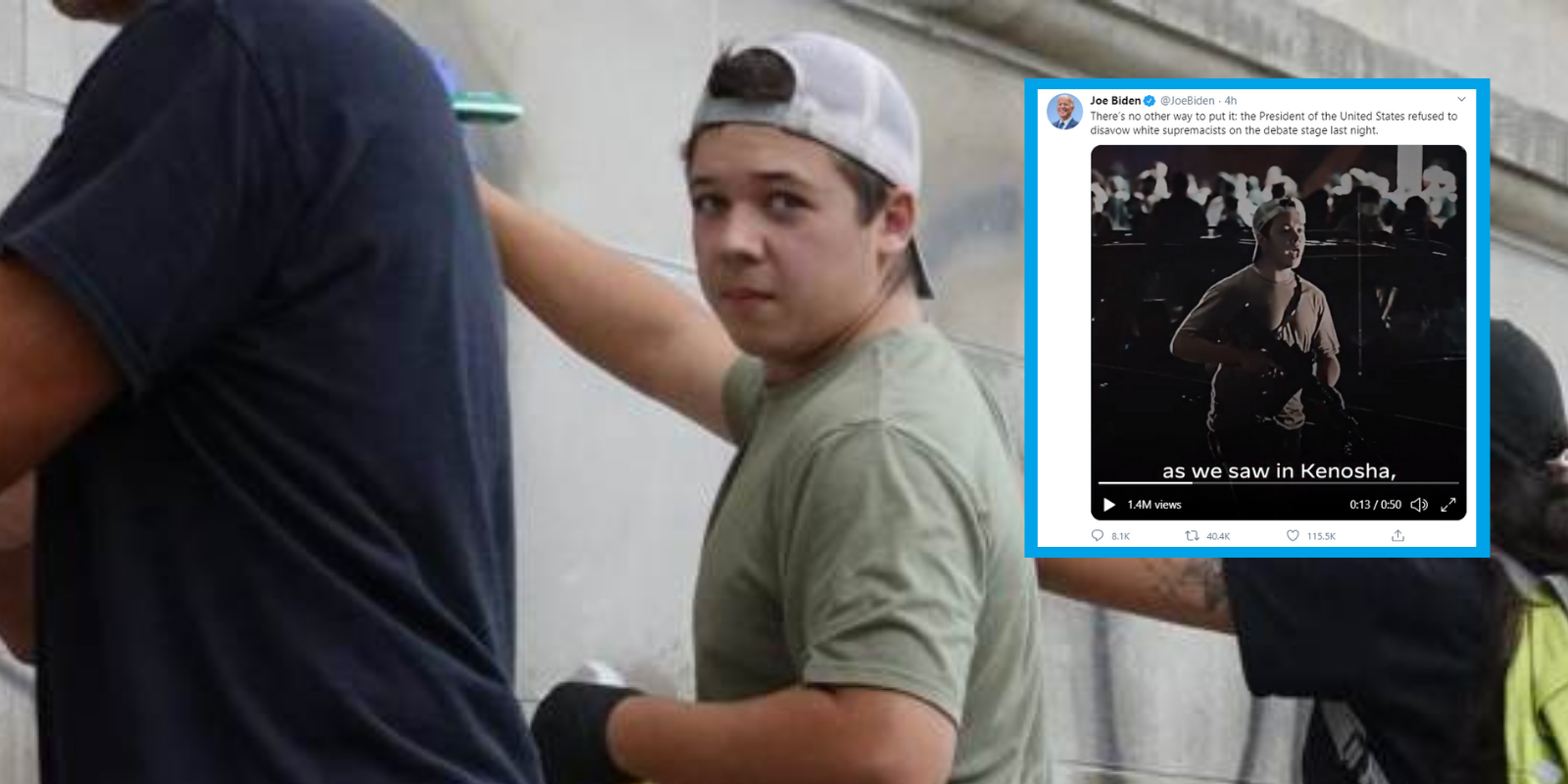 "There’s no other way to put it: the President of the United States refused to disavow white supremacists on the debate stage last night," Biden captioned the tweet early Wednesday morning.

In a segment on denouncing extremism, presidential moderator Chris Wallace interrogated Trump: "Are you willing, tonight, to condemn white supremacists and militia groups, and to say that they need to stand down and not add to the violence in a number of these cities, as we saw in Kenosha, and as we've seen in Portland?"

The soundbite about Kenosha then landed on a picture of Rittenhouse with his rifle in-hand.

"Sure I'm willing to do that, but—" Trump was cut off by an interjecting, "Do it." He continued, "I would say almost everything I see is from the left wing, not from the right wing. I'm willing to do anything. I want to see peace."

Trump referred to Antifa, a far-left militant organization that Biden downplays as "an idea," which terrorized Portland with over 100 days of relentless vandalism, looting, and arson.

Wallace and Biden sided to press Trump as their voices roared over the president's response. Wallace jeered, "So do it, sir." Biden added, "So say it. Do it. Say it."

"What do you want to call them? Give me a name. Go ahead," Trump volleyed. Then Wallace pointed a finger at white supremacists and the Proud Boys.

Biden's almost one-minute video conflated the Illinois teen with white supremacy despite a lack of evidence.

#FightBack Foundation, a free speech group that has raised nearly $2 million in funding for Rittenhouse's legal fees, recently posted footage that reveals the truth about the boy accused of fatally shooting two men and injuring another during the Jacob Blake riots in Kenosha.

It was revealed that Rittenhouse was hunted down by an enraged mob. And all three shooting victims possessed extensive criminal histories, including sexual abuse of children, gun-related charges, and domestic assault.

The defense video went on to juxtapose the youth's little-known background on the other side of law and order that the leftist establishment refuses to acknowledge and instead chooses to smear.

In December 2018, Rittenhouse started a Facebook fundraiser for a non-profit called Humanizing the Badge. In his own words, Rittenhouse sought to "forge stronger relationships between law enforcement officers and the communities they serve." He urged his friends to donate to the pro-cop charity for his 16th birthday.

And at 15-years-old, Rittenhouse participated in a youth public safety cadet program in Chicago's far northern suburbs. His since-deleted Facebook profile pictures often used the "thin blue line" frame, a symbol of solidarity with police. Another stated in the picture's periphery: "We Back The Blue." Several posts paid tribute to a Chicago police officer killed in the line of duty in 2018 and the life of McHenry County sheriff's deputy lost last year.

This review of circumstances still didn't stop Biden from suggesting that Rittenhouse is a white supremacist despite zero evidence that he is.

Marina Medvin, Rittenhouse's attorney, has since released a responding statement: "There is absolutely no evidence, not even a pinch, of this defamatory accusation that my client Kyle Rittenhouse is a 'white supremacist'—none."

"My client is a 17 year old patriotic, dutiful American boy who came to 'help people,' that's in his own words. These words are enshrined in videos that have been shared all over social media from that night in Kenosha," Medvin continued.

"So people are getting injured," Rittenhouse spoke on camera at the time. "Our job is to protect this business. Part of my job is to help people. If there's somebody hurt, I'm running into harm's way."

Rittenhouse had referred to his rifle as a means of protection, also demonstrating his medical kit strapped to his side.

In one scene, Rittenhouse is shown alerting the public that he is an emergency medical technician. "I am an EMT! Come to me!" he ushered in a hurt individual grasping on two others for physical support.

"There is no evidence of him being a 'white supremacist,'" Medvin reiterated. "This dangerous storyline was concocted by online trolls and then parroted by mindless politicians and pundits. The flagrant defamation needs to stop. They can retract and apologize, or then can deal with Lin Wood in court. It's their choice."

As for the criminal charges, Medvin did not address the issues of self-defense before trial; however, the "countless lies" spread about her client are "absolutely false. The lies and propaganda need to stop."