Rogan's comparison video shows that original video on the bottom, and a version of the video that appeared on CNN, which appears discolored, with Rogan appearing more sickly. 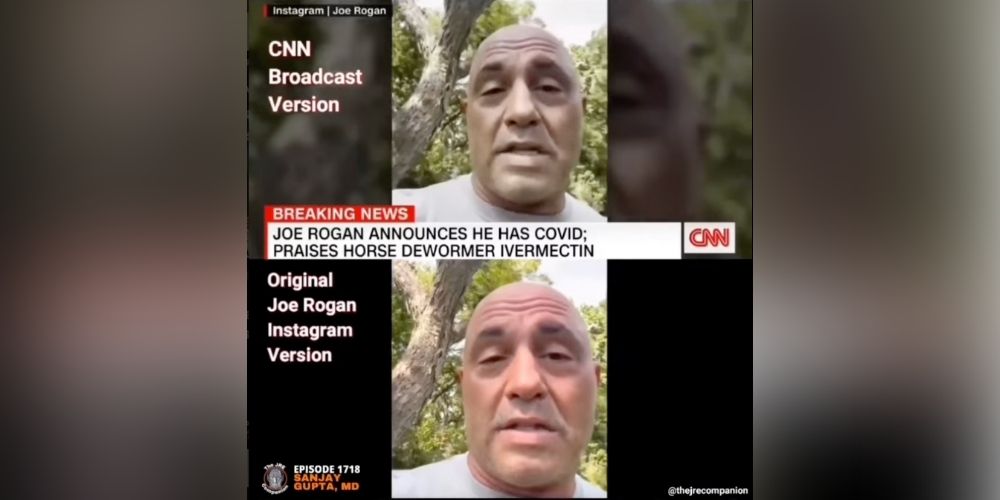 On Friday, Joe Rogan accused CNN of "yellow journalism" after the outlet appeared to alter a video of the podcast host announcing that he had tested positive for COVID-19.

Rogan posted a comparison video to his Instagram on Friday with the caption "Yellow Journalism," accompanied by the hashtag "fake news."

The video was originally posted to his account in September, where he announced that he had tested positive for the virus and told his followers that he was taking "monoclonal antibodies, Ivermectin, Z-Pak, Prednisone, everything" to combat it.

Rogan's comparison video shows that original video on the bottom, and a version of the video that appeared on CNN, which appears discolored, with Rogan appearing more sickly.

The Associated Press came to the conclusion that CNN's video had not been altered.

"False. An analysis of the video used by CNN in a report about talk show host Joe Rogan contracting COVID-19 found no sign that the color had been altered. CNN confirmed no changes were made to the color of the video," the Associated Press wrote.

The Associated Press stated that a "frame-by-frame analysis" with the outlet and a digital forensic expert found no evidence of alteration.

"There is no evidence that the clip from Anderson Cooper's show is manipulated or altered from the original Instagram video in an attempt to alter Rogan's appearance," said Hany Farid, professor at University of California Berkeley's School of Information, whose research focuses on digital forensics, image analysis and human perception.

Farid said he had compared the hue in several frames from the CNN video to Rogan's Instagram video, and found that the two were nearly identical. He noted though that the image in the Facebook post identified as being from the original did show signs of being altered.

CNN has also stated that they did not alter the video.

"The image was not altered using Photoshop or any filter," CNN said in a statement to the Associated Press. "The raw upload was ingested using the direct link to Joe Rogan's Instagram video, which was then cut for TV."