Justin Trudeau is an actor, not a prime minister

Justin is all surface. The selfie, the socks, the rolled sleeve and loosened tie, his and Sophie’s get-a-room Vogue Magazine cover, the Mr. Dressup tour of India: it’s all showmanship and brand messaging. Culturally, Trudeau is the personification of kitsch. 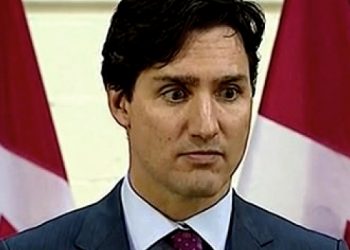 Justin Trudeau’s “contrition” session with the press turned out to be a nothingburger. He did not apologize. He would only cop to an “erosion of trust” between his guy, Gerald Butts, and Jody Wilson-Raybould, implying that Canadians should be blaming Mr. Erosion, not him. He allowed as how “there is always room for improvement,” the kind of thing one sees written on one’s children’s report card. He has nothing against contrition—in fact, he was on his way up north that very day to express contrition to the Inuit … for the past deeds of other people, that is, something he excels at.

As National Post reporter John Ivison noted in his column Mar 8, Trudeau’s press conference was “the enactment of humility,” and not the real thing. Exactement! “Enactment” is in fact the story of Trudeau’s public life. He is all political theatre, shining when he has memorized a script (“Canada’s back!” “Diversity is our strength!”…”Because it’s 2015!”…”Jobs!”), but very much at sea when the other actors walk away from the parts his scriptwriters assigned to them. At which point, as in his “contrition” press conference, he hits verbal bathos: “to move forward, not backward,” or “every day as prime minister I learn new things.”

Quebec journalist Richard Martineau delivered the cruellest thrust: “[Trudeau] thought he was indestructible, now he realizes he’s only a human being like the others. Goodbye Superman, hello Clark Kent.” Ouch. The New York Times wasn’t much kinder: “the fresher the face, the more obvious the blemishes.” Two-thirds of Canadians tell pollsters Trudeau has lost the moral authority to govern. That’s today. Come election day, who knows.

We had full warning of what we were going to get in Justin way back in 2000, when he performed the eulogy at his father’s funeral. And oh my goodness, “perform” is the operative word. Recently I found out Gerald Butts—of whom I had never heard at the time—had helped him write it. Well, that may explain a lot. Who begins a eulogy, “Friends, Romans, countrymen” – I mean, apart from Marc Antony in Shakespeare’s Julius Caesar? It was an extremely odd opening, because it conjures up one of the most egregious power grabs in western history, by a cunning political upstart with a silver tongue and an instinct for crowd-pleasing.

What I found disturbing about that eulogy wasn’t its content (at least what followed the “Friends, Romans, Countrymen” bit), which was beyond reproach, but the delivery: over-polished for a young man in deep mourning, as though it had been rehearsed in front of a mirror over and over again. I found disconcerting the continual, calculating scans of the audience, the wooing cadence, the carefully calibrated pauses, the eyes cast shyly downward and the lip bitten at the correct moment, the incongruous little smile playing at the corners of the mouth, as if he were savouring the rapt expressions on his audience’s faces, the eyes dry throughout, but then, as if on cue and command—at “Je t’aime, Papa’—the tears, the slow walk to the coffin and the head bowed upon it, as if in spontaneous emotion, which would have been moving, but as it was so clearly not spontaneous, as it was so clearly planned for effect and to cast him, Justin, in a noble glow, it seemed all about him, and therefore (for me) cringe-making. Upon which a grand burst of applause erupted, as though everyone knew they were at a play rather than a funeral. But what the hell? It was a damn fine play!

Yes, I know he was a drama teacher, but the point about good acting is that you’re not supposed to know it’s acting. For me, the acting was all I could see. For me, that eulogy was the height of kitsch. The writer Milan Kundera succinctly defined kitsch as “the second tear.” The “first tear” is private and unfiltered, the genuine, spontaneous response to strong emotion. The second tear is public and self-reflexive, summoned rather than greeted. Unlike natural tears, second tears act as a purgative for the shedder only when mirrored in the eyes of others. Kitsch and virtue signalling are closely aligned. In both, the performance of empathic sentiment is taken as a form of action.

All Trudeau’s lofty and often lachrymose statements seem like “second tear” moments to me: rehearsed, scripted, and completely detached from the messiness of life on the ground, from which he has been protected all his life. He welcomes the world to Canada’s open door, making little to no distinction between legal and illegal entrants, but “the world” won’t get anywhere near his secure dwelling. He moistens up at the concept of feminism, but his own wife has happily accepted a 1950s-era role, and he bullies actual feminists when they don’t agree with him. He speaks frequently about “who we are” as Canadians, and the wonderful values we embody. But when his own political future is at stake, “who we are” doesn’t enter the equation, even when it involves corruption on a grand scale, with sickening implications for victims abroad.

As a child with extraordinary public privilege, Justin Trudeau toured the world and met many heads of state, but he failed to move beyond warm childhood memories of friendly Uncle Fidel and come to grips with toxic ideologies and the human wreckage they cause. (At the funeral, Fidel’s face was impossible to read, but he seemed lost in wonderment to me, and I was imagining he wished he had kidnapped Justin when he had the chance to groom as his head of PR.)

Justin is all surface. The selfie, the socks, the rolled sleeve and loosened tie, his and Sophie’s get-a-room Vogue Magazine cover, the Mr. Dressup tour of India: it’s all showmanship and brand messaging. Culturally, Trudeau is the personification of kitsch.

How did this hollow, opportunistic, attention-needy man get elected in the first place? We all know. His name and his face and his acting skills. (If the eulogy for his father didn’t convince you of his true métier—the theatre—perhaps this performance, as an MP in 2012, responding to criticism of an ill-judged comment expressing sympathy for Quebec separatism in certain circumstances, ironic in the light of the present scandal, will).

Seriously, that was the sum total of what he had to offer, and enough Canadians bought his fool’s gold to enable the present scandal. Those who voted for him can’t pretend they thought he had the smarts or the experience (in any demanding field, never mind politics) or the passion for leadership or a history of contribution to public life or the intellectual heft or the gravitas to recommend him for leadership of the nation.

Everyone knew who he was: a pretty face, an affable celebrity-by-association with charm to spare, apparent sincerity, a willingness to be “managed,” political and social capital to burn in Quebec, and an earnest belief in the politically correct pieties that had been downloaded into his all-too-receptive brain at university. Add to these qualities, moreover, the egregious vanity—and sorry (not sorry) to be harsh, but the lack of character—to accept an invitation to power he knew in his heart had nothing to do with personal merit. Cynical chickens, meet ignominious roost.