“It is totally inappropriate for a hospital to exclude parents from the decision-making process for minor children," said gubernatorial candidate Kari Lake. 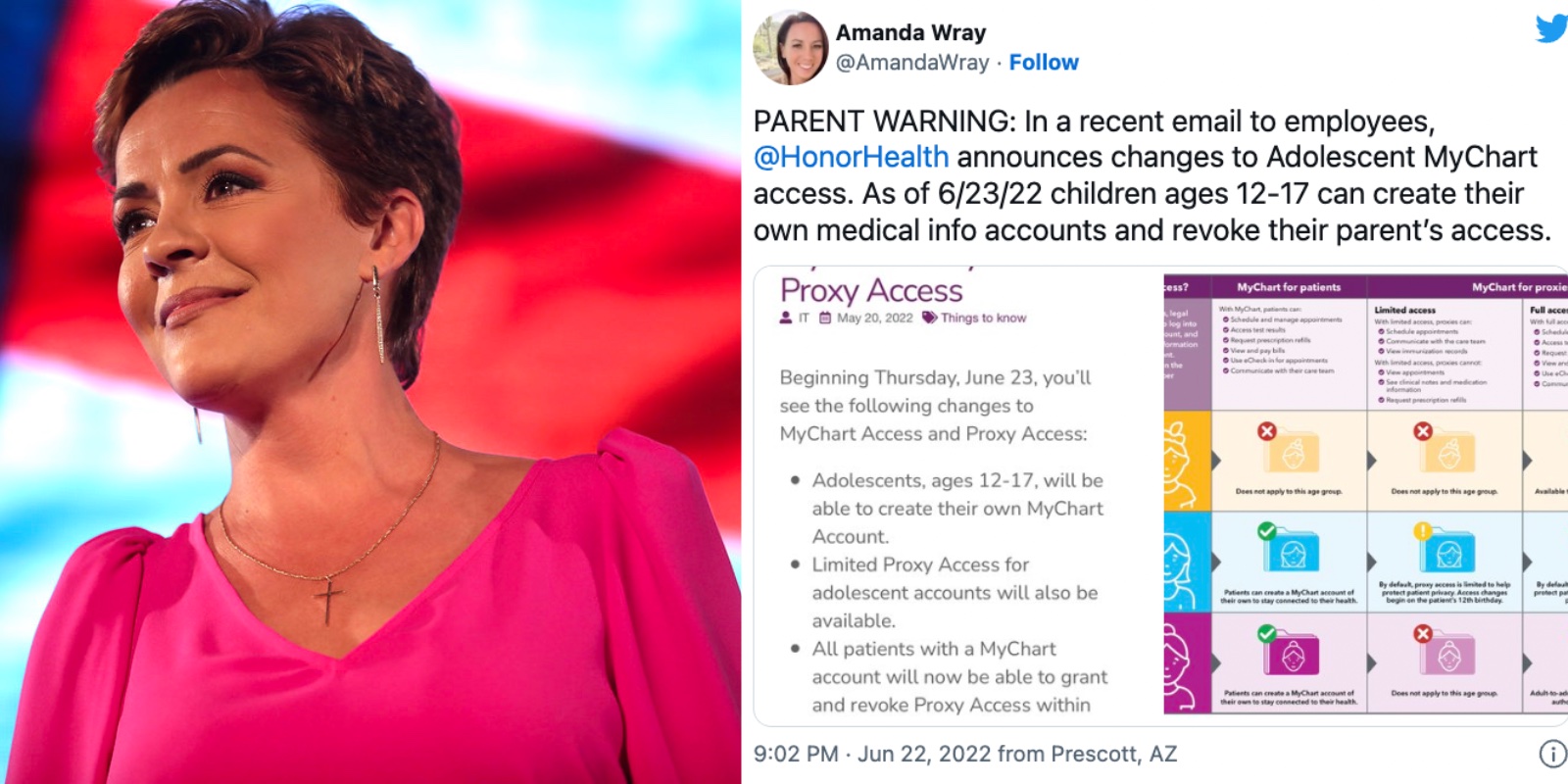 HonorHealth, a healthcare group in Arizona, has announced changes to its patient notification system that would allow children to revoke their parents’ access to their medical records. Arizona gubernatorial frontrunner Kari Lake blasted the policy, saying parents should not even consider bringing their kids to seek care with Honor Health.

HonorHealth uses MyChart, a nationwide system, to notify patients electronically about appointments, visit summaries, test results, new prescriptions, and messages from doctors, and will now allow children aged 12 to 17 to create their own MyChart profiles with alarming privacy settings.

The changes were announced to HonorHealth employees in an email last month and linked to a public-facing HR page that was posted by a concerned Scottsdale mother, Amanda Wray, on Twitter last night.

Effective today, children aged 12 and up “will be able to create their own MyChart account,” and have the ability to “grant and revoke Proxy Access within MyChart,” according to the announcement. Proxy access “allows parents, legal guardians, and caregivers to log into their personal MyChart account, and then connect to medical information for the patient they represent.”

Kari Lake, the Republican frontrunner for Arizona’s gubernatorial race, opposes the new move by HonorHealth and told The Post Millennial that “It is totally inappropriate for a hospital to exclude parents from the decision-making process for minor children. Parents should not even consider taking their kids to HonorHealth facilities unless and until they rescind this terrible policy.”

Lake has been a longtime advocate for parental involvement in their children’s education as well, calling for the resignation of a school board president who caught creating a dossier on parents opposed to CRT curriculum.

Arizona State Senator Kelly Townsend responded publicly to the HonorHealth controversy claiming that a bill she introduced, SB 1015, would have prevented the issue. Townsend’s bill introduced a parents’ bill of rights and would give parents the right to access their children’s medical records along with the right to make medical and educational decisions. The bill was introduced in January of 2022 but was tabled and a vote on the bill never occurred.

Amanda Wray spoke to The Post Millennial regarding her decision to post about the HonorHealth announcement saying, “This is where parents need to pay attention to not only who their voting for but pay attention to who’s providing their medical care. You don’t have to use HonorHealth so we can start voting with our wallets.”

Wray believes the move threatens the security of parents’ relationship with their children saying, “Who knows our children better than their parents? Removing our ability to provide support and intervention is undermining that [parent-child] relationship.”

A recent study from the Heritage Foundation claims that access provisions like the one HonorHealth provides allowing parents to be taken out of the treatment room are a significant contributing factor to increased youth suicides, specifically as it relates to gender transition treatment for minors.

The trend of excluding parents from their children’s medical decisions and treatments is growing rapidly amidst the push for COVID vaccines and easier access to gender transition treatments for minors. Last year, California schools were under the microscope after an LA school vaccinated children without parental consent in exchange for pizza.