The two took to their news channel, CNN, to pontificate about how "kind" the White House has been to the news channel that more Americans watch than any other. 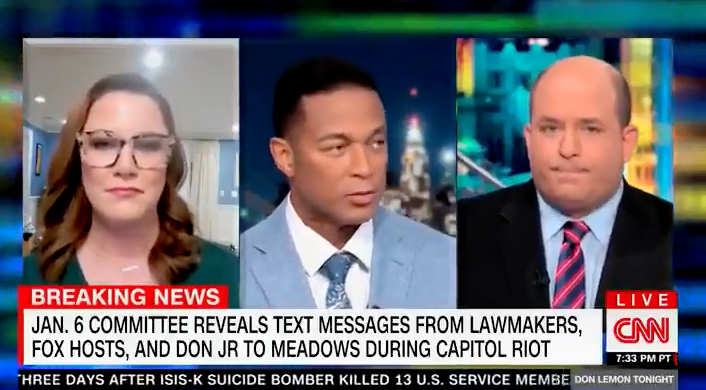 Don Lemon of CNN wants Fox News to be banned from the White House press briefing room. He just doesn't understand what Fox is doing there, or why Fox News' Peter Doocy keeps getting called on by White House Press Secretary Jen Psaki. Neither does Brian Stelter.

The two took to their news channel, CNN, which has far less viewership than Fox News and shows helmed by the men continued to tank in the ratings, to pontificate about how "kind" the White House has been to the news channel that more Americans watch than any other. Stelter has lost in ratings to reruns of "The Golden Girls."

"Why does Jen Psaki even continue to call on Fox in the briefing room? They've been very courteous, and I should say, kind," Lemon asked pundit SE Cupp. "Because if your network is promoting BS and lies about what is actually happening in the country and helping to inspire and incite an insurrection, why should they even be able to take part in a legitimate press briefing and legitimate journalism?"

Pelosi's January 6 committee shared on Monday a series of text messages sent by Fox News media pundits and anchors to Mark Meadows, who was President Donald Trump's Chief of Staff, encouraging him and Trump to put a stop to the riot at the Capitol on Jan 6. No evidence has been found of Fox News engaging in inciting an insurrection or advocating for a riot at the Capitol.

"Yeah, it's so tough," Cupp replied, "because there are reporters still at Fox, very few, and very few still getting air time, and the last good one just left the building." Cupp was referring to anchor Chris Wallace who hosted a Sunday morning news program and left over the weekend, picking up a contract with CNN's streaming service.

Lemon turned to fellow CNN anchor Brian Stelter for his take on why the White House would allow CNN's number one competitor into the briefing room.

"She makes a very good point," Lemon said, "even though they have vaccine rules and mask rules and mandates at their own places of business, but why, the question about, why do they even allow Fox to pretend in the briefing room that they're a real news organization?"

"Well, I think we'd say historically," Stelter said, "you've got to keep as broad an opening in the press corps as possible, let in as many voices as possible, even letting cranks, and there's been a lot of cranks in the briefing room in the past, not Fox, but just randos that are able to come to the briefing."

"Historically that's been the approach," he went on, "let as many people in as you can possibly fit in the room. But today, at the briefing, what did Fox ask about? The Christmas tree being set ablaze, which was awful last week, and I was really disturbed to see it."

Lemon laughed, Stelter continued. "But no one thinks that's the top ten story in America today except for Fox News. So what we have to do I think, is recognize it for what it is. And you've been documenting it, Don, and we've been trying to document it. Fox has changed dramatically, and these text messages tonight are more evidence that this media ecosystem has changed dramatically," Stelter said.

In fact, the question Fox News' Peter Doocy asked in the briefing room was about skyrocketing crime in major cities across the US. On Monday, he asked Psaki: "Do you think it's possible that big cities are dealing with these smash-and-grab robberies right now, and increase in criminal activities, because some prosecutors are too soft on crime?"

Psaki dodged the question, not giving any real answers, saying "I would say we have seen, I'm not going to attribute the reasoning from here," Psaki said. "What I will tell you is we have seen an increase in crime over the course of the pandemic. There are a range of reasons for that. And what our focus is on is what we can do to address it." This after blaming crime on the pandemic earlier this month.

In a follow-up question, Doocy asked "We’ve seen an arsonist burn down a half a million dollar Christmas tree in New York City, back out on the streets. Does the president think that’s good governing?" Psaki directed him to the Department of Justice and local law enforcement, and didn't offer an answer.

"And we can't view it the way we did 10 years ago," he went on, "when 'oh yeah, there's a bunch of channels, and one leans left and one leans right.' No, one now leans so far from reality that it's imperiled the country."

"It's obvious they don't care about the truth," Lemon said. Cupp nodded and Stelter concurred. "Any time you see something on their air, or you read something, you're like 'oh, it's Fox, you've got to take it with a grain of salt."

Lemon reportedly tipped off hate hoaxter Jussie Smollett after Smollett went public with details of his "attack," which turned out to have been entirely orchestrated by him to gain fame and attention. Lemon sent messages to Smollett letting him know that the Chicago police were looking into Smollett, and were not convinced that Smollett had been the victim of anything other than his own ego.

CNN was also the network that Chris Cuomo, brother of former Governor Andrew Cuomo, was recently fired from for using his media influence and power to try to help his brother get out from under sexual harassment scandals. Chris Cuomo also used his influence to try to discredit those who criticized his brother's COVID policies that led to an additional 15,000 nursing home deaths in New York.