A lesbian event has been removed from Sydney, Australia’s LGBT Pride after a vocal minority protested the participation of a popular lesbian YouTuber. 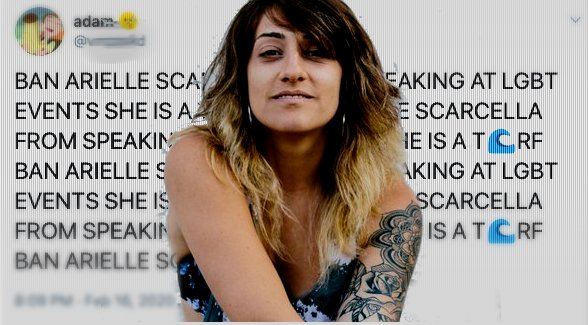 A lesbian event has been removed from Sydney, Australia’s LGBT Pride after a vocal minority protested the participation of a popular lesbian YouTuber with critical views towards transgender self-ID.

Arielle Scarcella runs an LGBT-centred YouTube channel with over 630,000 subscribers.

She has also spoken out against self-ID laws which have enabled biological males to be transferred to women’s prisons after the commission of serious offences, such as sexual assaults. In 2018, Scarcella collaborated on a video with Blaire White discussing how lesbian sexual preferences that do not include an attraction to biological males who transition to female were not “transphobic.”

Les-Talk was originally planned to be one of the events featured at Sydney Mardi Gras, the local Pride parade and festival. A panel-style discussion also featuring Tania Safi of Buzzfeed, the event began to draw ire from trans rights activists for including Scarcella. A petition was launched on February 15 demanding Scarcella be removed and replaced “preferably by someone of intersectionality.”

The petition was launched by Johnny Valkyrie, a transman and drag performer most notorious for a January incident at the Brisbane National Library. Valkyrie hosted Drag Storytime at the library, and was one of the two performers confronted by demonstrators from the University of Queensland National Liberal Club chanting “drag queens are not for kids.” The protestors were filmed and doxed.

The doxing resulted in one of the protestors, an openly gay student named Wilson Gavin, committing suicide the next day. Valkyrie used the opportunity at the library to raise funds for his “top surgery,” including a post on the day-of Gavin’s death—later updating the post to claim it was made prior to knowledge of his passing.

According to Valkyrie’s petition, Tania Safi of Buzzfeed has already dropped out of Les-Talk stating “I do not agree with Arielle’s transphobic and biphobic beliefs.”

10 Hours ago, Valkyrie uploaded an update to the petition, celebrating the “deplatforming” of Scarcella and Les-Talk.

Les-Talk was not officially cancelled, but was disassociated from Mardi Gras, according to a Facebook post made on the event’s official page. According to the post, the event is going forward being “privately held” by the “POC Queer women” organizing it.

Scarcella has not been disinvited from the event, and the event will proceed at another venue, separate from the LGBT Pride festivities.

Les-Talk’s Facebook page was littered with offers of support posted to the page’s wall by individuals outraged by Scarcella’s treatment.

Even multiple transpeople defended Scarcella’s beliefs, asserting she was not transphobic. One transwoman pleaded with the community to give Scarcella a “second chance,” while a transman praised Scarcella for “saying things no one else talks about.”

Scarcella is dismissive of the claims of transphobia, asserting she is anything but. “People have labeled me transphobic for being critical of trans ideas. I have no issues with being transgender. I’ve had more trans people in my videos than any other YouTuber to date,” she told The Post Millennial, noting that her only issue is with self-identification laws which might put women in danger.

“To those who truly believe I’m transphobic, I hope you change your hive-mind mentality and see how much you’re hurting your own community by acting so hateful.”