"If we're lucky we can cut out 30 percent of the population that votes the wrong way," Jeanine Kolkemo of Wy'East Middle School said. "Let the hunger games begin." 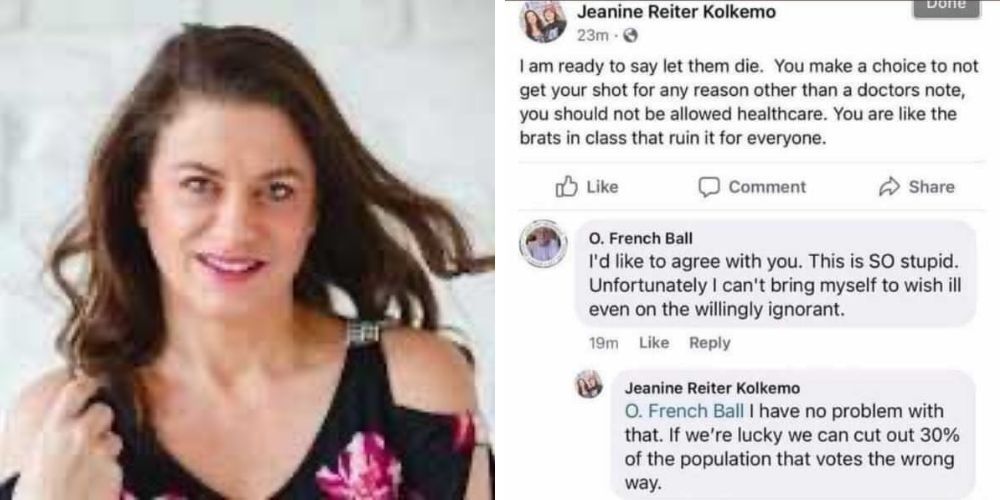 A middle school teacher in Vancouver, Washington recently came under fire after writing a disturbing post on Facebook where she wished ill on individuals that are hesitant to receive the coronavirus vaccine.

"I am ready to say let them die," Jeanine Kolkemo said, a 52-year-old PE teacher at Wy'East Middle School.

"You make a choice to not get your shot for any reason other than a doctors note, you should not be allowed healthcare. You are like the brats in class that ruin it for everyone," Kolkemo added.

In response to an individual's comment on her post which alluded to to the fact that it's wrong to wish ill on others, Kolkemo said "I have no problem with that."

"If we're lucky we can cut out 30 percent  of the population that votes the wrong way," Kolkemo added. "Let the hunger games begin."

Community members questioned Kolkemo's mental capacity to be a teacher due to her threatening and biased views and called upon Evergreen Public Schools for disciplinary action.

According to Janae Gomes, the chief operations officer at Evergreen Public Schools, the HR department is handling the situation.

"Thank you for bringing this to our attention," Chief Operations Officer of Evergreen Public Schools Jenae Gomes said in an email to Clark County Today. "We are aware of the situation and it is being handled through our human resources department. We are not at liberty to discuss personnel matters but we do appreciate you bringing this forward."

A source at Evergreen Public Schools told The Post Millennial that they are not "shocked" by Kolkemo's comments given the frequent acts of hostility towards those with differing views within the school system.

"The culture in that school is tolerant of everything except ideas, and I think you could say that about the entire district having worked in nearly every middle school and high school in Vancouver. Given that, I was not at all shocked to see the post from Kolkemo wishing death upon the 30 percent of the population that 'votes the wrong way.' I know for a fact this is not uncommon thinking in that school district," the source said.

"I worked in the district as a sub for years, and graduated from the district as a student. When I would take subbing assignments at Wy'East it was my introduction to the wokeness of public schools. Several teachers had 'Mx' instead of 'Mr' or 'Mrs' on their classroom doors. I had to ask the students what this meant, and they informed me that the teachers don't identify as men or women, but rather a mixture (Mx) of Mr and Mrs," the source told The Post Millennial.

Last year, Caroline Garrett, the principal at Wy'East Middle School resigned following a lawsuit brought forth by another substitute teacher.

The lawsuit claimed that substitute teacher Eric Dodge arrived at the school on a non-school day wearing a MAGA hat prior to "racial equity training."

Dodge alleges that Garrett became "aggressive and hostile" in the parking lot, demanding to know "what is the f*cking deal with you and your hat?" Dodge also claims Garrett berated him, calling him a "racist," "bigot," "homophobe," "liar" and "hateful person," according to Clark County Today.

Garrett resigned as a result and signed on to a different position within the school system.

The Post Millennial reached out to Kolmeko and Evergreen Public Schools for comment but has not heard back.