In video taken by Keen, she said that the pub, later revealed to be Khyber Pass Pub, had received a phone call, and the group was subsequently asked to leave. 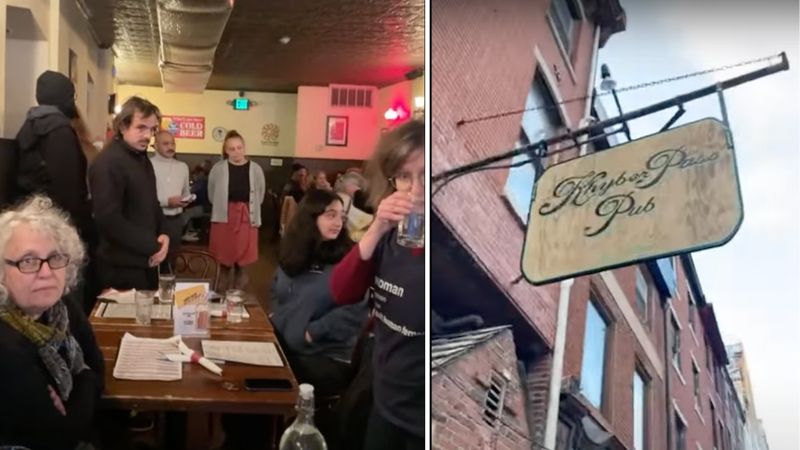 Following the Sunday stop in Philadelphia of Kellie-Jay Keen’s Let Women Speak tour, attendees of the event were kicked out of a local pub after the establishment received a call.

In video taken by Keen, she said that the pub, later revealed to be Khyber Pass Pub, had received a phone call, and the group was subsequently asked to leave.

One woman was heard shouting in the background, to which Keen explained, "that woman is shouting that we were doing nothing and we’ve been asked to leave."

Outside the pub, the woman who was heard earlier in the video gestured towards a vacant storefront next to the pub that was for sale and said, "This is a beautiful property, we’re in the market for one. We might choose this one."

Following the group being kicked out of the pub, a number of one-star reviews began popping up for the establishment’s Google page.

"This disgusting anti-woman pub evicted a group of twenty women including black women and immigrants after they already served them at the request of some men who didn't like women having free speech. This is a gross violation of women's rights. No woman should visit this disgusting hateful place that literally threatened to call the police, gave no explanation despite already bringing food and drinks. This man and woman were sarcastic and rude as they ushered us out with no explanation. Misogyny and extreme racism.Not recommended," read one review.

"It's despicable that in the 21st century, you don't allow women's rights activists into your establishment," another review stated.

In contrast, a five-star review issued after it was revealed that the group was kicked out stated, "Managed to kick out violent transphobes, so that earns my respect because the place cares about trans rights. I'll definitely come here when I get the money."

Before the incident at the pub, protestors with loudspeakers attempted to drown out women speaking of their experiences regarding biological males entering women’s spaces in downtown Philadelphia.

As the event began its live stream, the camera showed Philadelphia police officers blocking protestors from the event with their bikes.

From behind the line, protestors chanted "hey hey, ho ho, your transphobia’s got to go" and "TERFs go home," referencing the acronym trans-exclusionary radical feminist used against women who speak out about biological men in women’s spaces and the medicalized gender transitions of children.

"Good afternoon, we’re here in Philadelphia to tell these silly silly men and their handmaiden champions that women don’t have penises, that men don’t have vaginas, that there is no such thing as non-binary, and no matter what you want to covet boys, you are not having our rights.

"In the United States of America right now, there are men who have raped women, who are serving time in American women’s prisons."

Referencing the crowd of protestors who were chanting behind the group, a large percentage of which sounded to be men, Keen said, "listen to these men’s voices."


Unlike many previous events, the tour stop concluded with minimal issues. In DC, police had to intervene after transgender rights activists began blowing alarms to disrupt the event. On the west coast, event attendees were assaulted in Washington, and a stop in Portland was canceled after threats of violence from local Antifa members.