"Portland is not completely off limits, but Portland is off limits if I don’t have a huge budget for security, or certainly to do something that would minimize the risk to myself and other women," said Keen. 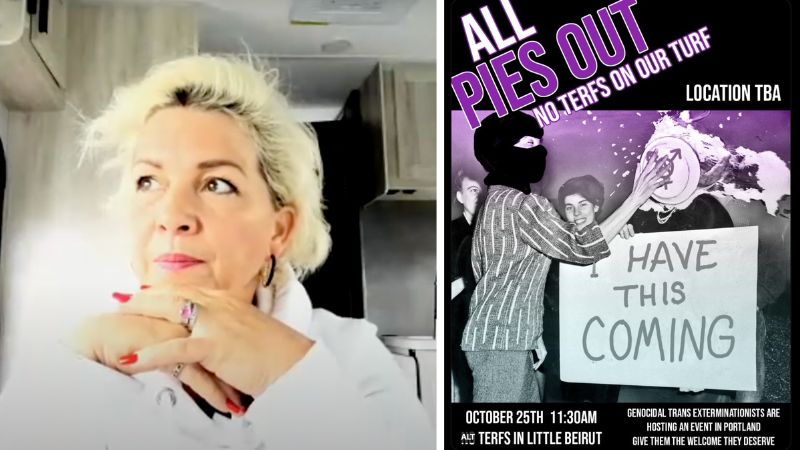 Speaking in a YouTube live stream on Monday afternoon, Keen said, "Portland is not completely off limits, but Portland is off limits if I don’t have a huge budget for security, or certainly to do something that would minimize the risk to myself and other women."

In a statement to The Post Millennial, Keen said, "I was alerted to multiple threats of violence against me as well as a local principal lying and saying I had links to the far right. I am relatively well known by name and sight to these violent, unhinged ideologues. The police have confirmed that they are too short staffed to be reliable."

"I cannot in good conscience put women at risk just to sound alarm to the wider public," she continued. "No one is coming to save us. If they are not remotely moved by teenage girls having their breasts sliced off I can’t see the bloodied bodies of women making a difference."

"I have four children and a husband I adore, therefore my life is not just mine to risk," she added. "This is not the end of my focus on Portland, I intend to raise funds to get the message out one way or another."

"There are some women that have been complaining that, you know, this documentary, how is it anything without Portland?" Keen said on YouTube announcing the cancellation. "Well, it’s also nothing if it turns into the death of Kellie-Jay, or, 'remember that time that women in Portland got killed?"

She continued on to state that if, by now, "lawmakers and policymakers are not persuaded that women’s rights are at risk, or that it’s wrong to mutilate children’s bodies, I don’t think women being beaten in the street is actually going to convince them."

The event was scheduled to take place on October 25.

Leading up to the event, Isabel R. Araujo, a transgender Antifa leader in Portland, made posts to social media organizing a direct action to try and shut down Keen on her speaking visit in Oregon, with Araujo raising money for weapons.


In a flyer posted to Twitter on October 22, Antifa states that "genocidal trans exterminationists are hosting an event in Portland. Give them the welcome they deserve."


Efforts from the group also resulted in Eventbrite canceling tickets for the tour, which is making stops nationwide.


"Friends. We don’t know exactly where yet but we know that Kellie-Jay Keen, a UK TERF activist w/ties to fine folk like Richard Spencer & David Duke, will peak in PDX at 11:30 on Tuesday 10/25. Let’s show up for our trans friends to let them know that hate is not welcome here," Rawson wrote.

Keen said in her YouTube video though that she is still looking at an "effective and impactful" way to send a message to the city that "a woman is an adult human female."

"I’ve done it before, I believe I can do it again. There are, you know, there are ways and means of delivering this message, but me being injured is not one of those ways," she said.

Keen later said that "So I don't feel like I'm abandoning my first role of Kellie-Jay which is I always win," but that the situation is not "ideal."

"I thought it would be fun to go into Portland, but there aren’t middle-class bratty students that will come out. These are really, really violent and psychopathic men that just don’t mind hurting people," she said.

Baily noted that the speaker’s corner event "is not permitted, and no additional city resources have been activated to facilitate this event."

"Due to resource and legal limitations, our public order posture is complex and often not what the public may or may not expect," Bailey added, stating that "police response is prioritized based on unforeseeable events in the city,  and are often delayed for less significant events."

"While the First Amendment provides broad protections for the expression of speech, it does not protect criminal acts. The expectation is that event participants will obey all laws and ordinances, including traffic-related laws," said Bailey.

Bailey stated that "failure to obey all laws may result in citation or arrest on the date of the event, or in the future upon further investigation," and added, "Please ensure the attendees are aware there are no permits obtained for Tuesday’s event."