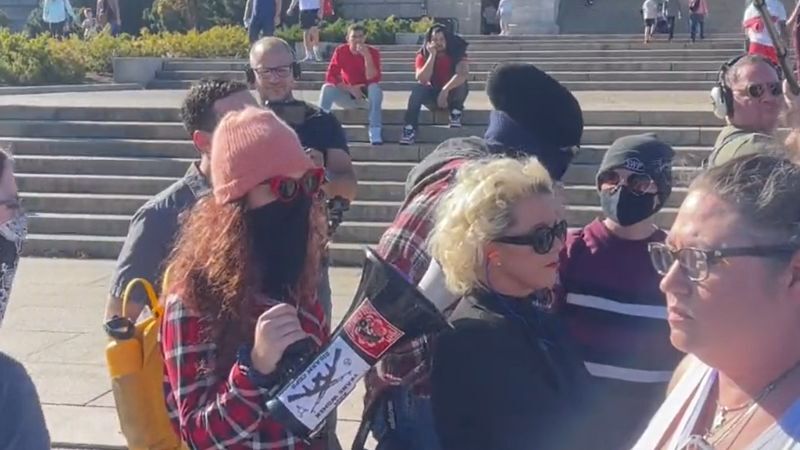 Video footage shot by The Post Millennial’s Hannah Nightingale shows the trans extremist protestors holding the loud siren alarms directly next to the head of Keen, who stands her ground with earplugs in place, and attempts numerous times to push the bullhorns away.

Police arrive on the scene shortly afterward and ask the protestors to back up away from the women attending the event.

A very irate young person wearing a mask asks the women how it feels that the “young people are taking over,” claiming that they will be “writing the legislation.”The same activist then tells the women that this is why their children no longer talk to them and can then be heard repeatedly asking the women where their children are.

After being told that if they do not turn off the alarms, they will be arrested, the trans activists finally turn them off, to the cheers of the assembled women. Someone then starts wailing and another blew loudly into a whistle.

As the protesters begin to walk away, after threats of arrest from the police, the attendees of the Let Women Speak event sang the song “So Long, Farewell” followed by cheers and applause.

After moving to an area out of the way of the protest, one of the protesters was arrested. Police were surrounded by the crowd carrying the trans flags and screaming expletives at the police, demanding to know what their fellow protester was being arrested for.

Kellie-Jay Keen’s US Let Women Speak tour, which aims to give ordinary women the chance to take to the streets to speak about the impact of gender identity ideology on the lives of women and girls, has been plagued with violent and aggressive counter-protests from Antifa and trans activists.

Keen had to cancel the Portland event due to serious threats from Antifa, including one Antifa leader organizing a counter-protest and fundraising to buy weapons. A middle-aged woman was injured at the Tacoma, Washington event after a group of activists showed up, and women were surrounded by aggressive counter-protesters clad in black at the event held in Chicago.

Speaking with The Post Millennial shortly after the event, Keen said that the police took a while to act and didn't take the protestors very seriously at first, but "once they stood around for about five minutes and got those sirens in their ears," the police say "just how disruptive it is."

Keen said that the US Parks Police officers that intervened on Monday were the "first police force to intervene. In Chicago they did, but they basically just stopped us from getting physically attacked."

"I think the American right, First Amendment right for free speech should include the right to be heard," Keen added. "And I was really delighted today that the Parks Police actually followed through with that."

Speaking in regards to the protestors that were present, Keen said, "some of these are kids that have been told that we hate them, that we don't want them to exist, that we want to cause them harm, and I think they genuinely mean -- they think that we're really terrible people, not that we just don't want their bodies to be butchered and broken and mutilated."