"I'm sorry," Raichik wrote in response, "but I can't date you. I'm straight." Lorenz, of course, didn't get the joke. 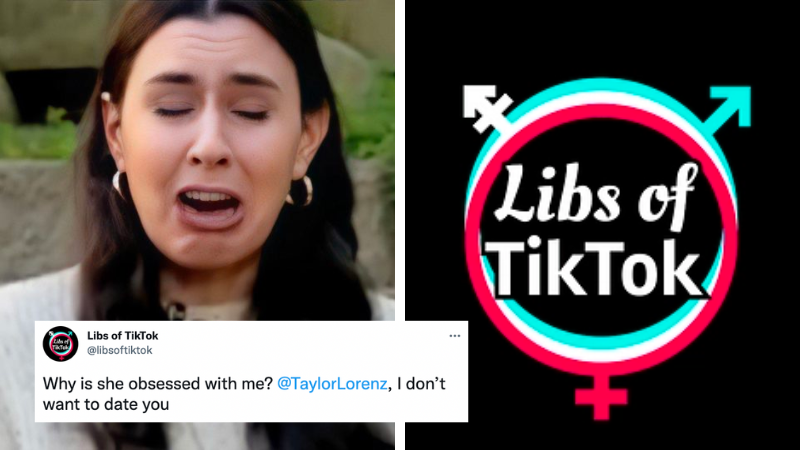 Libby Emmons Brooklyn NY
Sep 13, 2022 minute read
ADVERTISEMENT
ADVERTISEMENT
The Washington Post and Taylor Lorenz are coming for Libs of TikTok and Chaya Raichik yet again, this time with a forthcoming hit piece claiming that Raichik's expose of "gender affirming" surgeries for minors at children's hospitals "foster[s] violence" and that her "posts led to death threats" against doctors. But Raichik did what she always does, and exposed Lorenz in her own words.

Making a joke in reference to Rep. Alexandria Ocasio-Cortez's assertion that anyone who insults her wants to date her, Raichik wrote "Why is she obsessed with me? Taylor Lorenz, I don't want to date you."

Raichik shared a dm from Lorenz that leveled the accusations and demanded a response from Raichik as to those accusations. "Hi Chaya," Lorenz began, "a colleague of mine is publishing a big story on influencers who spread narratives about election fraud in 2020, exploring what happened to their megaphones after Trump was de-platformed.

"You are not one of those influencers," Lorenz went on, "but your account has received extensive promotion from them. We mention in the story that your account has helped to foster violence and that your posts led to death threats against medical providers at Boston Children's Hospital, and a bomb threat caused the hospital to be evacuated."

This appears to be supposition on Lorenz's part, since Boston Police have stated that, while a bomb threat was called in to Boston Children's Hospital, it was a hoax. The identity of the caller or callers is not known to police, and a motive has not been shared. Seth Dillon of Babylon Bee, who works with Libs of TikTok, had offered a $20,000 reward for information leading to the arrest of the bomb threat caller.

Boston Children's Hospital performs so-called gender affirming surgeries on minors. They surgically remove the healthy breasts of 15-year-old girls to give them a more masculine appearance. The hospital administers puberty blockers and cross-sex hormones to minors as well. This information is freely available on their website. They stated as well that they will perform vaginoplasty surgeries on boys who are 17 or older. However, after that was exposed by this outlet, Libs of TikTok, and others, the hospital removed that information from their site.

As to evacuations and threats, Chris Elston, who goes by Billboard Chris on Twitter, shared information from a source at Boston Children's Hospital saying that there had been no additional security, and that there was no threat at the hospital.

Twitter went so far as to suspend Libs of TikTok for "hateful conduct" and violating the "hateful conduct policy" after the account shared audio of phone recordings which revealed that employees at National Children's Hospital in Washington, DC believed that the hospital was performing hysterectomies on healthy, 16-year-old girls, for the purpose of treating gender dysphoria. The hospital later said that those employees didn't know anything.

"We also say you intend to continue to target hospitals," Lorenz continued in Raichik's dms. "Do you have any comment? The piece is running [Tuesday] morning, so please send through a response to the above quesitons by 5pm PST. Thanks!"

"I'm sorry," Raichik wrote in response, "but I can't date you. I'm straight."

Lorenz didn't get the joke. "I think you accidentally replied to the wrong DM. This is Taylor Lorenz from the Washington Post and we're asking you to reply to the question above." She reitterated her false allegations and demanded Raichik respond to them.

"Hey Tay," Raichik replied, "I know getting rejected must be really difficult. In some good news, Ross has a 55+ senior discount on Tuesdays so maybe that will make you feel better."

Lorenz has been targeting Raichik for months. First, she doxxed Raichik, who had been posting anonymously under Libs of TikTok, and then proceeded to make false claims against Raichik, who shares posts of people speaking their beliefs in their own words.
ADVERTISEMENT
ADVERTISEMENT
taylor libs date me