"...trying on siblings clothing, playing with the quote 'opposite gender,' toys, things like that," Dr. Carswell of Boston Children's Hospital said are indicators of a child knowing they are "trans." 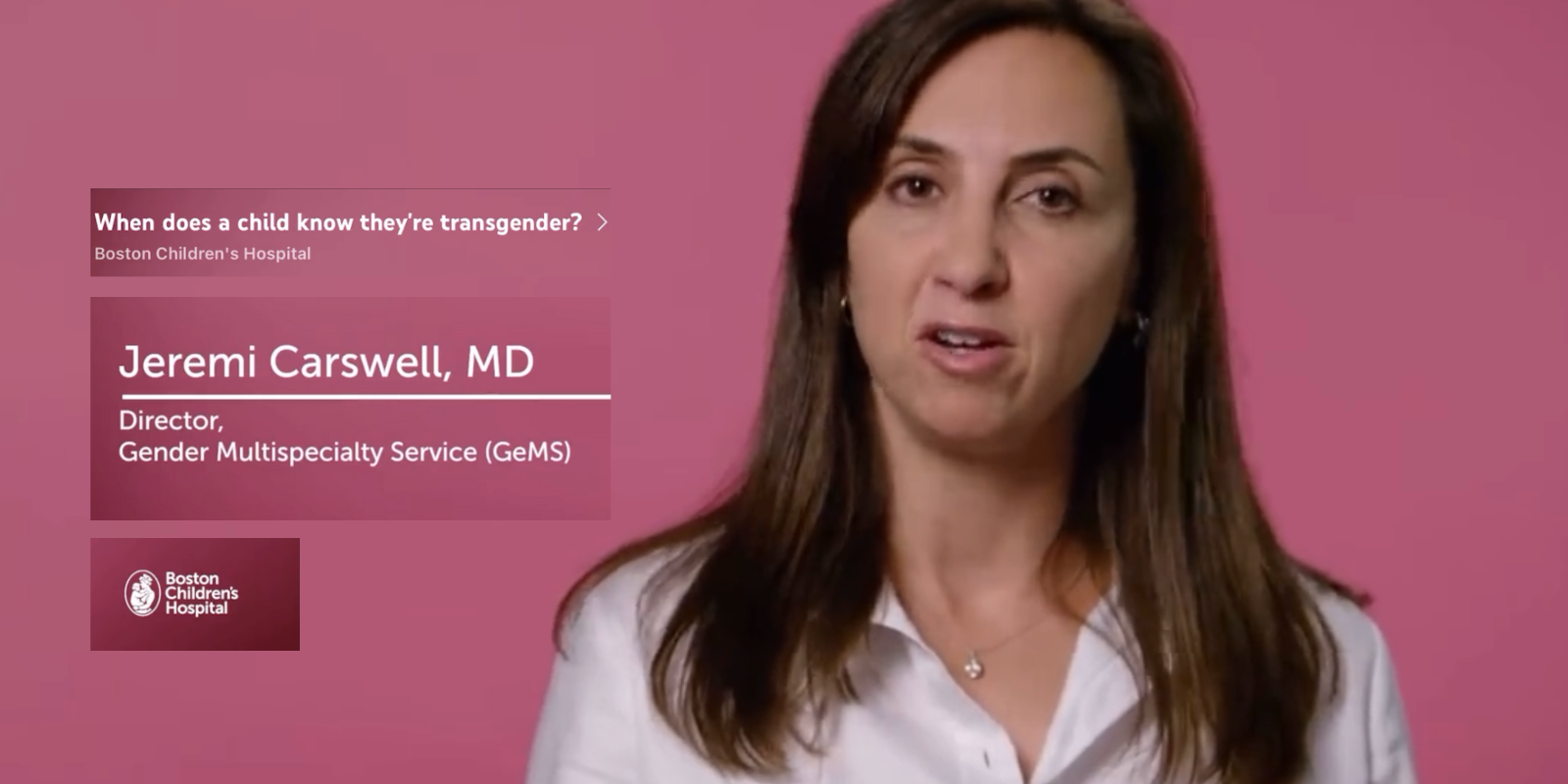 Boston Children's Hospital is the preeminent hospital serving gender dysphoric children in the US. They tout this on their website, and doctors who work with this population at the hospital are proud to share videos about how they perform sex change operations, and how to tell if your child is trans.

In a recent video, shared by Chris Elston, Dr. Jeremi Carswell, director of the Gender Multispecialty Service at Boston Children's, explains that "A child will often know that they're transgender from the moment that they have any ability to express themselves, and parents will often tell us this." Carswell is not the only doctor to link gender stereotypes to an understanding of how to identify that a child is trans.

"We have parents who tell us that their kids they knew from the minute they were born practically," Carswell says, before going on to describe a child's unwillingness to adhere to gender stereotypes as evidence of being trans.

"There is more and more a group of adolescents that we are seeing that really are coming to the realization that they might be trans or gender diverse a little bit later on in their life," Carswell said, using these teens to justify her assertion that pre-verbal children can "know" they are trans.

"So what we're seeing from them is that they always sort of knew something was maybe off and didn't have the understanding to know that they might be trans or have a different gender identity than when they had been assigned. So that is a growing population that they're, that we are seeing and that's being recognized as being trans and able to be treated," she stated.

Carswell's video is one of many shared by Boston Children's Hospital to promote the Gender Multispecialty Service for children and teens at their hospital. The Post Millennial reported that the hospital had provisions to allow biological males as young as 17 to undergo vaginoplasty, a surgical process that reforms existing genital flesh to appear as the genitals of the opposite sex. Since that report, GeMS has altered their site to say that 18 is the cut off.

However, Boston Children's Hospital also claims to follow guidelines issued by WPATH, which states that teens with parental consent should be allowed to undergo surgical procedures to transform their bodies to appear as the opposite sex, despite the overwhelming number of complications that hinder urination and eliminate sexual function. Doctors are aware of these complications and problems, yet continue to recommend these surgeries.

The feminist movement, which paved the way for the LGBTQ+ movement and the push for "trans" initially stated that gender stereotypes are not an indicator of male or females, and that females who did not adhere to gender stereotypes, or partake in traditional gender roles, were valid and acceptable.