A recently unearthed, early draft of guidance from WPATH reveals that their minimum age recommendations for children to start the process of medicalized gender transition have been lowered. 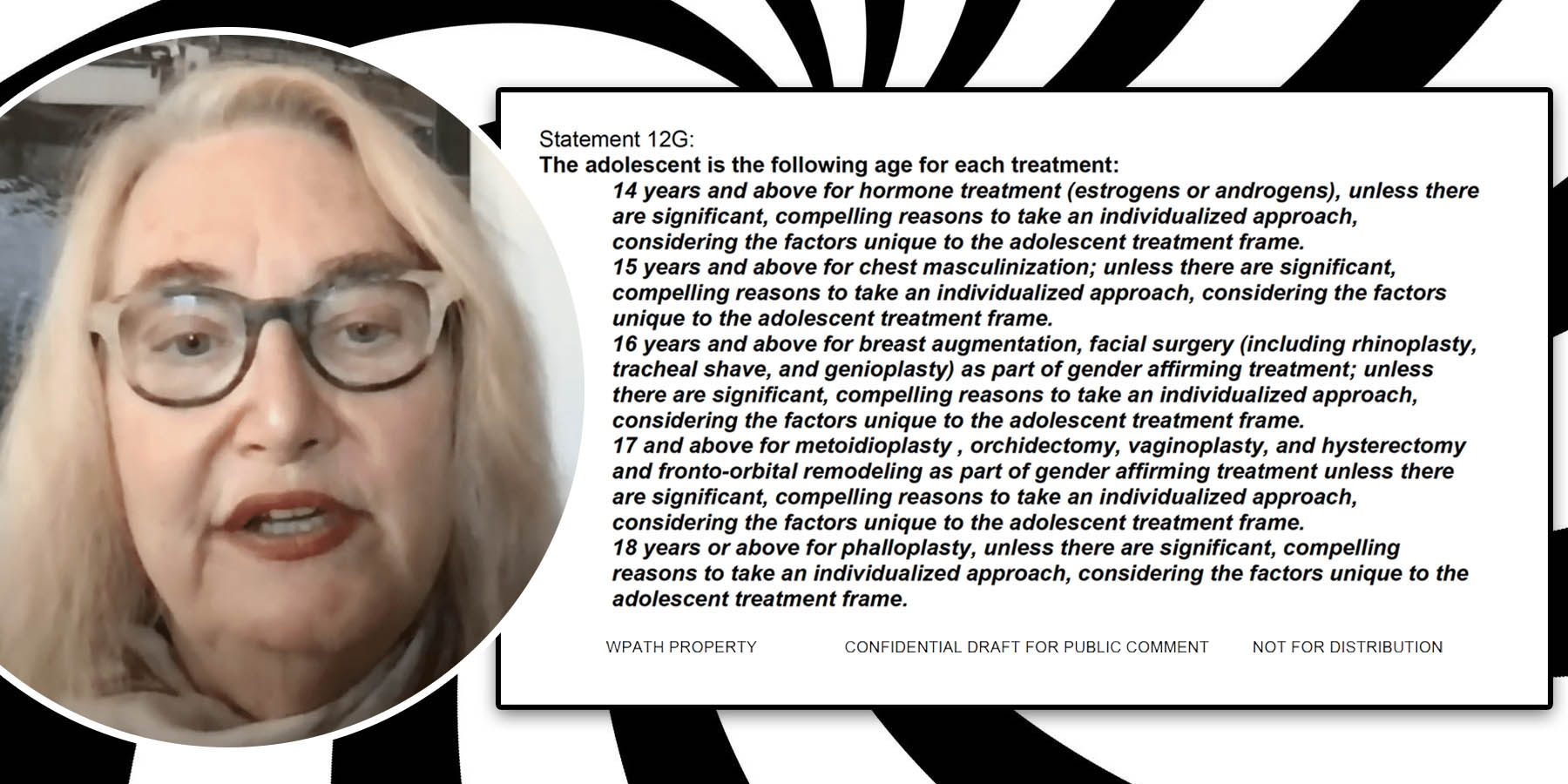 A confidential document obtained by The Post Millennial from the leading transgender health association shows they plan to lower the recommended age for minors to obtain cross-sex hormones that cause permanent changes to the body and irreversible chest, genital and face surgeries. This health association is one that countless doctors and hospitals rely on to create their guidance for medicalized gender transition for minors and adults.

The World Professional Association for Transgender Health (WPATH) is set to release the 8th edition of their Standards of Care this year, but a recently unearthed, early draft reveals that their minimum age recommendations for children to start the process of medicalized gender transition have been lowered.

The age for genital surgeries, such as hysterectomy and vaginoplasty, has been lowered to 17, a year earlier than previous guidance.

The WPATH sets international guidelines and protocols for the medical process of gender transition, which is undertaken through prescribing cross-sex hormones and through surgical procedures designed to give the appearance of the opposite sex, though function is often lacking and complications are common.

WPATH also gives recommendations for minors. These guidelines are viewed as the gold standard for the field of health care for those diagnosed with gender dysphoria, and are widely used in hospitals and clinics across the US, Canada and the UK. WPATH guidelines are highly influential to major medical groups, including the American Academy of Pediatrics and the American Psychological Association, as well as for health insurance companies around the world.

A person undergoing medicalized gender transition will be expected to take cross-sex hormones for the rest of their life. These hormones can permanently alter the body in a matter of months. WPATH recommends beginning this life-long course of treatment at the age of 14, two years earlier than the group’s previous advice.

WPATH recommends that teen girls as young as 15 undergo double mastectomies—the removal of healthy breast tissue—or what is commonly and euphemistically called "top surgery." Previous guidance suggested this procedure could be performed at least one year after hormones, around age 17.

For genital reconstruction and sterilization, WPATH recommends that patients be 17 years old to consent to a metoidioplasty, which is the creation of a pseudopenis from existing genital tissues, an orchidectomy, or removal of the testicles, a vaginoplasty, or the creation of a pseudovagina from existing genital tissue, and hysterectomy, which is complete sterilization, and fronto-orbital remodeling, which is an operation to reshape the bones at the front of the skull and above the eye sockets.

The only remaining surgery recommended for adults aged 18 is phalloplasty, which is the creation of a pseudopenis from skin grafts taken from elsewhere in the body. Often flesh is taken from the forearm.

WPATH's recommendations for beginning puberty blockers for their off-label use to treat "gender dysphoria" have not changed, which for girls is around ages 8 to 13 and typically two years later for boys. These drugs, the brand name for which is Lupron, stop the body's natural process of maturation.

Lupron and other puberty blocking drugs have not been FDA approved for the purpose of treating gender dysphoria, and there have been no randomized controlled trials to study the effects of taking these drugs during adolescence, during such a crucial window of rapid growth and development.

Lupron Depot is intended to treat men with prostate cancer, women with endometriosis or fibroids, and children with precocious puberty. In the case of precocious puberty, continuous, long-term use is not recommended. Yet this is how WPATH recommends they be used.

If a child takes puberty blockers at Tanner stage 2 (the first signs of puberty) and proceeds to cross-sex hormones, they will be permanently sterilized and never able to achieve an orgasm.

Receiving most surgeries and hormone treatments require only 1 year of documented gender dysphoria, so many teens who recently decided on a trans-identity can easily obtain hormones and surgeries with parental consent and a letter of support from a therapist. For genital surgeries, more than one letter is required, but they are no less easily obtained, especially now that there are coalitions of health clinicians willing to break the law and subvert the medical safeguarding in place by writing letters of support without ever meeting a patient.

These surgeries are elective procedures, though the idea that teens can consent to life-long body modification, becoming a permanent medical patient, sterilization, and reduced sexual function, has been recently called into question.

Taxpayers through state-funded Medicare programs are often the ones paying for "gender affirming" treatments and surgeries. A recent study found that 34 of 51 (67 percent) states' Medicaid programs include GAHT (gender-affirming hormone therapy) and 25 of 51 (49 percent) include GAS (gender affirming surgeries) as covered benefits.

Although the new guidelines have not been finalized and released, many medical organizations are already abiding by them. Boston Children's Hospital, whose pediatric surgery center boasts of treating over 1,000 families, explicitly cites their implementation of WPATH guidelines. Boston Children's Hospital allows minors aged 17 to obtain vaginoplasty, per the new WPATH guidelines. Dr. Oren Ganor, co-director of Boston Children’s Center for Gender Surgery, hinted in an email that children even younger can be operated on. Ganor said in an email to WBUR that he is "slightly flexible" when it comes to the age of young males seeking genital surgery.

The Society for Evidence Based Gender Medicine (SEGM), an international group of over 100 clinicians and researchers, responded to the 8th edition draft in a critique, citing the potential for harm due to their lack of methodological rigor and very low-quality evidence.

WPATH says that their guidelines were written "based on available evidence" but cited flawed, cherry-picked studies that support their conclusions. "The current description of the literature betrays a strong bias toward studies promoting social and medical transition," said SEGM.

The WPATH references studies from Jack Turban and Jason Rafferty.  Turban, a trans activist and psychiatry fellow at UCSF, has a long history of using bad methodology and biased samples to draw his preferred, but erroneous, conclusions from data. Rafferty's thoroughly debunked 2018 study cited by WPATH, has "a shocking number of errors, omissions, and blatant mischaracterizations of the available research on pediatric gender transition, some of them so fundamental and egregious as to suggest bad faith in the authors," says PhD researcher Leor Sapir, adding that the article’s central conclusion is negated by its citations and flawed logic.

Psychologist Erica Anderson resigned her position as a board member of the WPATH last year after speaking out about their "sloppy" treatment given to kids. Anderson said that dozens of families have told her their child didn't receive comprehensive assessments before given access to these life-altering treatments.

"They tell me horror stories. They tell me, 'Our child had 20 minutes with the doctor'" before being offered hormones, she said. "The parents leave with their hair on fire."

The WPATH is has also come under fire recently for some of their individual members' alleged sympathy for pedophiles and predilections of child sexual abuse. Licensed professional counselor Miranda Galbreath, who advocates for the destigmatization of pedophiles and advocates for their sympathetic portrayal as "minor attracted persons," is a registered member of WPATH. In May, an investigation published by Reduxx revealed that members of a pedophilic child castration fetish forum had been involved with WPATH for over a decade. Reduxx found that the 8th edition guidelines reference a castration fetish website that hosts child pornography as part of their inclusion of eunuchs into the transgender community.