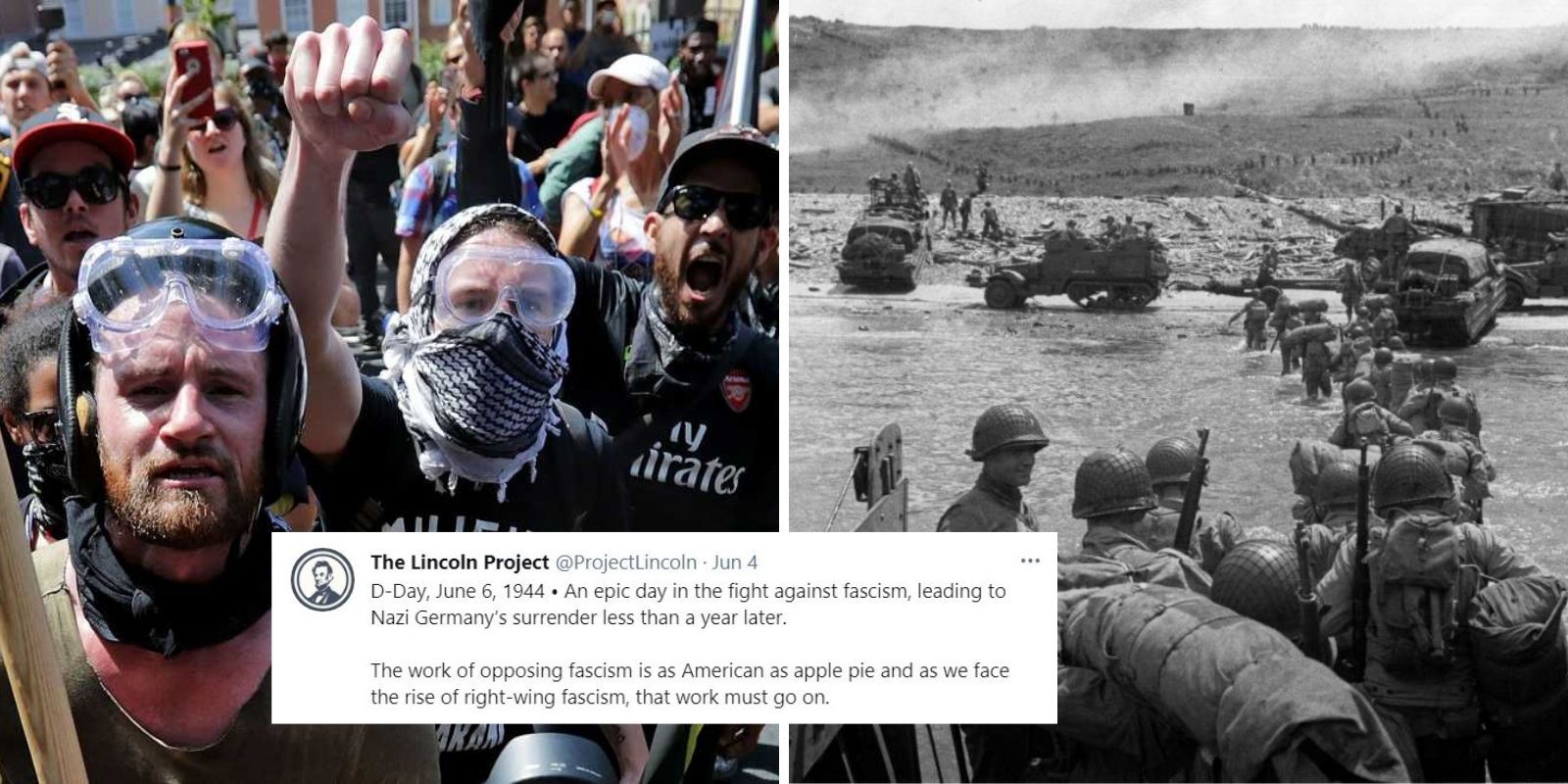 "The work of opposing fascism is as American as apple pie. As we again face the rise [sic] fascism — this time on our own shores — that work must continue," the Lincoln Project's account tweeted Sunday. Project Lincoln's account specified Friday that the "work must go on" to combat "the rise of right-wing fascism."

"Who is Antifa?" the ad begins, claiming that Antifa "stormed the beaches of Normandy, parachuted into the French countryside..." The video claims Antifa "took down Nazi machine gun nests, tore apart the Third Reich's strong holds, liberated concentration camps, liberated France, Italy, Belgium, Holland." The ad says that Antifa is part of "a war we still fight today" against fascism. Images of former President Donald Trump and Fox News host Tucker Carlson flashes as the narrator claims that anti-fascism is not "a cable news talking point" but "an American ideal that should be memorialized because it was paid for in blood."

On Friday night, MSNBC host Brian Williams, who still has not informed viewers of the Lincoln Project's ethical issues, concluded the show by showcasing the new ad lauding Antifa members and likening the operatives to World War II veterans.

"An important anniversary coming up this weekend," Williams said to the camera. "We hope you can take a moment and remember it. It was beyond bold. It was outlandish. Over 150,000 men invading the French coastline under withering German fire to begin their march across Europe where they would go on to win World War II 336 days later. While others will debate whether or not we could possibly mount such a thing today as broken as we are, there was a time when we saved the world from tyranny and fascism. If it wasn't our finest hour, it's hard to say what was. And the folks at the Lincoln Project are out with a reminder to all."

Antifa engages in riots and beats up journalists despite what Lincoln Project wants you to believe. Antifa just mobbed and assaulted journalist Andy Ngo for covering the latest far-left protest in Portland last weekend. This is not the first time Ngo has been attacked as he has been targeted multiple times by the organization.

Apologists in the media industry have often made excuses for Antifa violence. Politicians like Rep. Jerry Nadler denied the total existence of Antifa rioters saying the organization is just "a myth." President Joe Biden said in the first presidential debate on the national stage that "Antifa is an idea, not an organization."

Those including Sen. Ted Cruz have called out Democrats like Sen. Mazie Hirono for refusing to condemn or acknowledge the existence of Antifa but instead seem to be passive when condoning the group's actions. Vice President Kamala Harris promoted a bail fund which was used to bail out rioters in Minneapolis last year.

Critics say the Democrat won't condemn Antifa because Antifa is the militant arm of Democratic law makers, pointing to the example of the wide spread consensus that there would be riots if Trump won in 2020.

Intellectuals including Dr. Jordan Peterson have attacked Antifa as "pure narcissism" while others like Dr. Bret Weinstein have fallen victim to its violence.