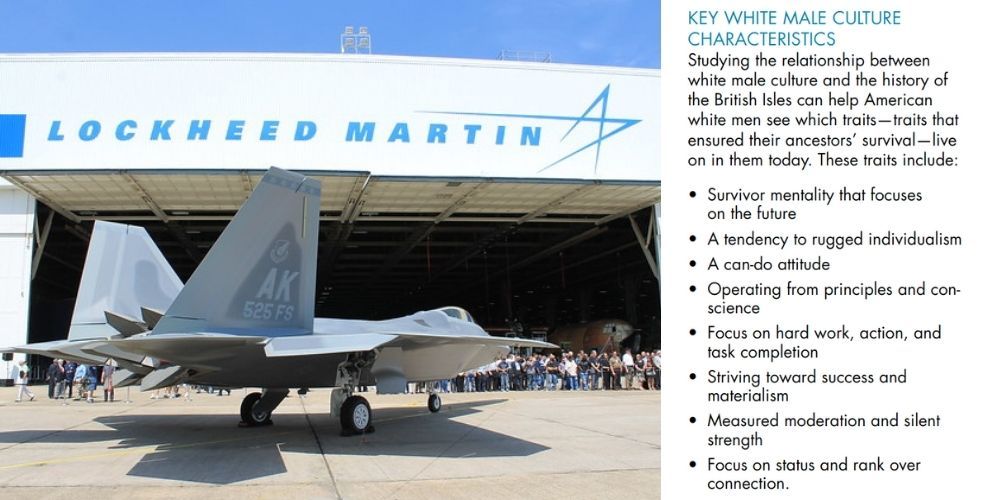 Internal documents obtained by Christopher Rufo showcase the teachings from the three-day zoom seminar held by the diversity-consulting firm White Men As Full Diversity Partners, who "specializes in helping white males awaken together."

The training began with a "free association" exercise led by diversity trainers, who asked employees to list what they associate with the term "white men." According to Rufo, the trainers wrote down "old, racist, privileged, anti-women, angry, Aryan Nation, KKK, Founding Fathers, guns, guilty, and can't jump."

The trainers then went over "what's in it for white men," referring to the training session, with responses such as "I won't get replaced by someone who is a terrier full diversity partner," "I have less nagging sense of guilt that I am the problem," and "Improve the brand, image, reputation of white men or how we are viewed."

The training listed key white male culture characteristics as "a can-do attitude," "a tendency to rugged individualism," and "focus on hard work, action, and task completion," adding that the corporate culture and hierarchy in the US has a "devastating effect" on those who "don't fit the in-group norm."

Employees were then required to "repeat and internalize" 168 different white, male, and heterosexual statements through what trainers called the "hearts and minds" portion of the session.

Statements included "I can use the word 'whom' without appearing pretentious," "I can commit acts of terrorism, violence, or crime and not have it attributed to my race," "if I have low credibility as a leader, my gender is not the problem," "if I am a heterosexual, its highly unlikely that I'll ever be beaten up by a spouse or lover," and "I can have friendships with or work around children without being accused of recruiting or molesting them."

To finish out the training, attendants were required to read a series of "I'm tired" statements from people of color and women, which state "I'm tired of people telling me I need to 'get over my history,'" "I'm tired of you making more money than me," I'm tired of not wanting to play golf," and "I'm tired of downplaying my intellect or expertise to not show up a man."

"This is pure neorealism from a company that receives billions of taxpayer dollars every year," Rufo wrote on Twitter. "I call on the United States Senate to launch an immediate inquiry into the racist practices at @LockheedMartin. We must shut this down before it endangers our national security."