"It wasn’t just Padilla that was dismissed, it was also Berg and Lomax, and the video clearly shows them doing it," said veteran prosecutor Richard Doyle. 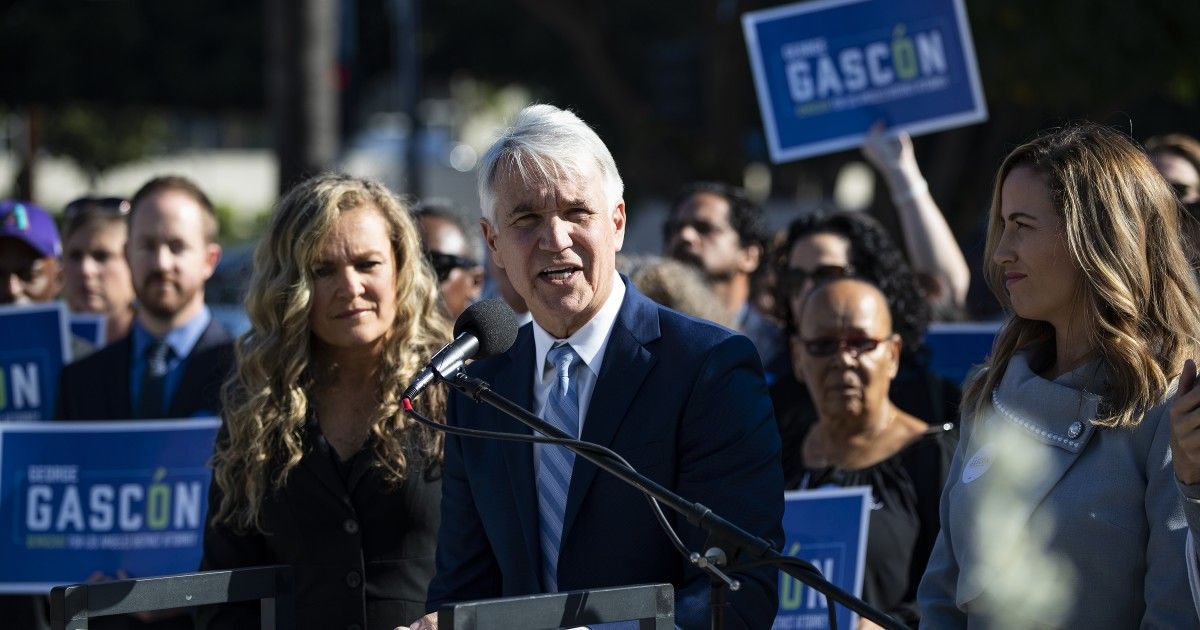 A Los Angeles veteran prosecutor spoke out to Fox 11 after allegedly being reprimanded for questioning District Attorney George Gascón’s decision to drop charges against three anti-police protesters that attempted to derail a train during a protest last November.

In newly obtained surveillance video and jail call recordings by Fox 11, questions arose after Gascon decided to drop charges against all protesters his first day in office.

The volatile case was being handled by Richard Doyle, a prosecutor for 34 years with the LA County District Attorneys office, and according to Doyle, evidence showed strong prosecution for the case but charges were dropped anyways.

"It was a strong case, it was a strong prosecution," Doyle said. "You go into work every day, and you do the right thing, that’s what I did, and I got reprimanded for it.”

Doyle told Fox 11, that he was reprimanded and punitively transferred after questioning Gascon’s decision to drop the charges even though surveillance video showed clear evidence of the crimes that were committed.

As individuals were protesting over the death of Andres Guardado at the hands of the LA County Sheriff’s Department, the surveillance video captured Berg and Lomax dragging a barricade across the train tracks as Padilla followed closely behind.

Scary moments unfolded as sheriffs deputies quickly removed the barricades, sparing only 15 seconds before a Metro train came speeding across the tracks.

"The surveillance video clearly shows that Lomax and Berg pick up the barricade and clearly drag it across," Doyle said. "So the evidence against them is incredibly strong just from the video."

Although the video clearly incriminates Lomax and Berg, the view of Padilla was mostly blocked by trees but Doyle told Fox 11 that LASD detectives witnessed Padilla helping place the barricade on the tracks.

"What you can’t see is the point in time when he grabs and continues to help them," Doyle said. "They let go of it, and he continues to pull it, and that’s blocked by trees."

But according to Doyle, Padilla incriminated himself three days later while attending a different protest and confessed to the crimes after being arrested by LASD detectives, Fox 11 reports.

"He confessed to them that yes he was at the protest, yes he did drag the barricade across, but that it was not his intent to wreck a train," Doyle said. "He said he thought it could cause an electrical problem with the train."

Padilla, Lomax, and Berg were charged with felony attempted train wrecking, a charge where individuals face life without parole. Other charges against them include unlawful obstruction of a railroad, a two to four-year sentence in county jail.

"We did get an expert from Union Pacific to testify that, yes, that obstacle could have caused a train to derail," Doyle said. "So it’s a very strong case, it’s corroborated all the way around."

On George Gascon’s first day in office, Black Lives Matter activists met with Gascon and demanded the release of Padilla. Within hours after Gascon was sworn in on Dec 8, Doyle received a phone call from Mario Trujillo, one of Gascon’s executives, and ordered him to dismiss charges against Padilla, Doyle told Fox 11.

"He told me that the DA has authorized me, Mario Trujillo, to direct you to dismiss the Padilla case for further investigation," Doyle said. "And I said, Mario, I know the case very well, what further investigation does the DA want? And he said I don’t know. And I told him I’m not comfortable dismissing what I know to be a good case, a viable prosecution, without knowing the reason why, and he said, well can you just dismiss it today and we’ll find out the reasons later? And I said no."

Because prosecutor Richard Doyle refused to drop the charges for what he believes to be clear evidence of the suspects committing the attempted train derailment, he was reprimanded.

“That Friday, I was personally served a letter of reprimand for essentially disobeying a direct order of the DA, it goes in your file permanently,” Doyle said to Fox 11.

Shortly after Doyle received the letter, he was transferred from the Compton office to the environmental office, supervising only nine individuals compared to the 66 he oversaw just days before.

"I interpreted it as retaliation and a punitive transfer," Doyle said.

Fox 11 reached out to Gascon’s office about the charges being dropped despite clear video evidence and according to Alex Bastian, a special advisor to Gascon, “The felony counts were dismissed in the interest of justice following a review of video evidence and inconsistencies in reports from the arresting agency.”

However, recorded phone calls made by Padilla from inside jail indicate that Padilla phoned his wife and asked if he should hire his personal attorney, Jorge Gonzalez, who happens to be a friend of Gascón’s and contributed $1,000 to Gascón’s race for DA, Fox 11 reported after obtaining the recordings.

"In the meantime, Jorge might be able to get you out, the fact that he knows Gascón is pretty fu**ing big," the unknown acquaintance says."Yeah, agreed," Padilla replies.

“What good is that gonna be in the end, it’s not the same as having Gascón’s ear, or having Jorge [Gonzalez] just fu**ing text him, cause he’s told me, I knew him before this, he’s shown me how he texts with him, so that’s like, uh, you know, having a good mechanic versus your best friend whose married to a mechanic at this point I think. He told me that he’s spoken to him, and when he brought it up to Gascón, Gascón said he had already started reading about what’s been happening because it’s been everywhere,” Padilla said to the acquaintance.

Responding to the recording, Doyle told Fox 11 "Clearly, Mr. Padilla thinks that his attorney has the in with the DA and that he is going to benefit from it," Doyle said. "And with hindsight being 2020, that’s exactly what happened."

Fox 11 reached out to Gascon’s office about the recordings and whether or not Gascon’s relationship with defense attorney Jorge Gonzalez swayed his decision to drop that case.

“No and no,” Alex Bastian denied.

“Mr. Doyle’s fanciful claims that I got the Padilla case dismissed because of my ties to DA Gascon are pure fantasy from someone who ignores fairness and wants to do the Sheriff’s bidding," said defense attorney Gonzalez while accusing LASD deputies for lying in their police reports.

Doyle responded: "It wasn’t just Padilla that was dismissed, it was also Berg and Lomax, and the video clearly shows them doing it.”

"The Sheriff’s deputies who were there observing, who know Padilla and see what’s happening, the video corroborates what they say they saw because they said the women started pulling it across, and Padilla came up behind them and he grabbed on as well,” Doyle continued.

"I believe the evidence was there to prove either count," Doyle said. "But I would have expected the defense to come to me and try to negotiate something less. Would it be reasonable to settle that case for the second, lesser count, putting an obstruction on a railroad track? Yes, I think that would be a very reasonable disposition of that case."

A grievance against the L.A. County DA’s office from Doyle has been filed, alleging he was retaliated against by Gascón.