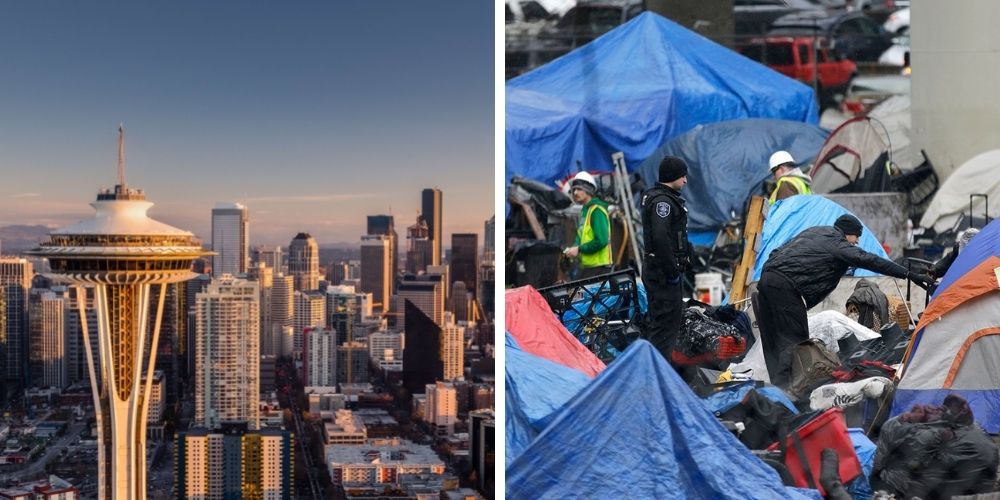 A new survey has revealed that two-thirds of Seattle voters have "actively considered" leaving the city due to ongoing safety concerns. The poll conducted by the Seattle Metropolitan Chamber of Commerce measured quality of life including homelessness, public safety, affordability, and downtown Seattle’s recovery.

The survey was the second installment of the Seattle Metro Chamber of Commerce's  "The Index." The first was conducted in August and revealed that Seattlites top concern was homelessness.

When asked about the issues facing the city that voters are most frustrated or concerned about, the number of voters citing crime/drugs/public safety grew by 17 points since Index 1 in August 2021, from 28 to 46 percent. 73 percent of residents said their neighborhoods are less safe than they were two years ago.

91 percent of Seattle voters say downtown Seattle cannot fully recover until the homelessness crisis and public safety problems are addressed, with an increasing number of voters saying they would not feel safe visiting downtown during the day and at night. The majority of voters increased that said they will visit downtown less often for non-work activities since the August 2021 Index.

Three-quarters said their own neighborhood feels less safe compared to two years ago and that addressing homelessness and public safety issues is essential for downtown to recover.

It was also revealed that voters do not trust the City Council on police reform, and strongly prefer a method that includes reform as well as hiring more officers rather than defunding and decriminalizing misdemeanors. Additionally, over 60 percent of voters distrusted the way the city spends taxpayer dollars.

In 2020 during the riots that rocked the city, the Seattle City Council defunded not just the police department but also the Navigation Team, which utilized police, Waste Management, and social workers to clear encampments. Yet, 86 percent of voters support clearing the encampments, including 55 percent of self-identified Socialists that participated in the poll.

One of the proponents of defunding the police, Councilmember Andrew Lewis, who marched with Antifa against the Seattle Police and as a city attorney advocated for releasing prolific offenders, recently was quoted as saying that fellow council members were "looking at me a little funny," after he remarked that "It is blatantly evident that a significant amount of the city’s crime and disorder is attributable to conditions in homeless encampments."

He also said, "It was easy to say 'oh, leave the poor encampments alone,' when there weren’t very many of them, and they weren’t leading to this."

Rachel Smith, president and CEO of the Seattle Metro Chamber said in a statement,  "The voice of Seattle voters is crystal clear: we are united on the most pressing issues, we are united on the solutions, and we are united in our need to address them with urgency. While some of the numbers in this research are tough to see, I have a great deal of optimism because the voters have laid out a clear path, one that rejects ideological binaries and embraces an ‘and’ approach to solutions. One that centers our values and will enhance our quality of life here for everyone. And one that the Seattle Metro Chamber is ready to get to work on."

Smith added, "The data shows that Seattleites support sophisticated approaches that reflect the complexity of the policy issues of today. But when it comes to the basics of quality of life, our new poll also shows that they’re running out of patience. Nearly every demographic, including homeowners and renters, young and old, is ready for prompt, pragmatic action from our elected leaders."

Seattle marked a grim milestone last week after violent crime resulted in 13 deaths, which accounts for half of the 26 homicides in King County in just the first three months of 2022, breaking a six-year-old record from 2016, when 12 of the 23 homicides in the county happened in the city.

Assistant Chief Deanna Nollette, commander of SPD’s Criminal Investigations Bureau, told the Seattle Times, "We're not seeing it slow down at all." Nollette added that "…the single biggest increase is in homicides with a homeless nexus," where the victim, suspect, or both are homeless or a killing will occur in a homeless encampment. According to Nollette, those cases account for 40 percent of the homicide unit’s caseload.

Seattle Mayor Bruce Harrell’s office issued a statement in response to the survey which read, "Mayor Harrell understands the frustration many Seattleites feel because he shares those concerns too. That's why his focus has been on delivering outreach and services to those experiencing homelessness while also urgently improving efforts to keep parks, sidewalks, and right of ways clear. He is continuing to lead efforts to advance innovative public safety solutions, as well as hire more SPD officers to better address crime, respond to emergencies, and conduct thorough investigations. These survey findings make clear that voters strongly align with the mayor's mission of creating an affordable, safe, and thriving Seattle for all."