A Montreal man is being praised as a hero after his actions saved a dozen people from being injured or killed. 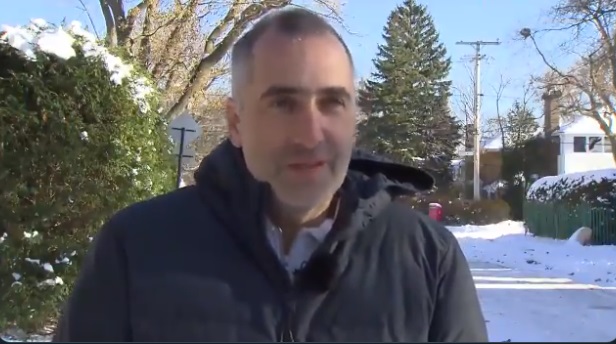 A Montreal man is being praised as a hero after his bold actions saved roughly a dozen people from being seriously injured, or worse.

Erick Marciano was driving his SUV to a meeting Tuesday afternoon in Montreal’s downtown core, when he saw a car speed through a red light, with Montreal police hot on the vehicle’s tail.

When he saw the suspect vehicle making a sharp U-turn in front of him toward a crowd of roughly a dozen pedestrian and city workers, Marciano says he knew he had to act.

“I didn’t want him to hurt anybody,” Marciano told CBC’s Daybreak. “I figured, sacrificing a car was really no big deal. And that’s what I did.”

Marciano then swerved his SUV over the divider, blocking the vehicle from being able to speed into the crowd of pedestrians. The only people injured was the suspect, and police are praising his actions as heroic.

“It came into my mind, I said: ‘this isn’t going to happen here,” he said.

Marciano says he knew the vehicle would be able to absorb the hit, not even considering his overall safety. “I figured, he had a Honda, and there was no way he was going over the median,” he said. “For me, that was the safest thing to do.”

On Facebook, Marciano posted a comment about a story, saying “I guess I am a nice guy if only my wife would believe it lol [sic]”

After the impact, police were able to arrest the 19-year-old suspect at the scene. He will appear in court on Wednesday afternoon, and has been charged with “numerous criminal offences,” including impaired driving, failing to stop for police, assault with a weapon, driving with a suspended licence, dangerous driving, and driving a stolen vehicle.

Marciano’s actions have been praised universally. From police, who thanked him for risking his life, to the mother of the suspect.

The suspect’s mother thanked Marciano for stopping her son from injuring people. She said her son has had a history of mental health issues, and that it shouldn’t take these kinds of incidents for the government to realize that mental health needs to be made a higher priority.

Police were also grateful. “They were very, very thankful. Very thankful. Too thankful—it was embarrassing,” Marciano said to the Montreal Gazette.

“I salute the courage of Erick Marciano, whose heroic gesture saved the lives of many pedestrians [of downtown Montreal.] On behalf of myself and the Montrealers, I thank you from the bottom of my heart, Mr. Marciano.”
(Translated by Google)

Though Marciano’s SUV was damaged in the collision, Marciano’s insurance company told him that we would not be held responsible for the wreck.

“What matters is the outcome, and everything’s well, and everybody could go home last night.”