"Jesus is associated with religion and it's offending people," the security guard said to the man. "If you want to shop here you need to take off that shirt." 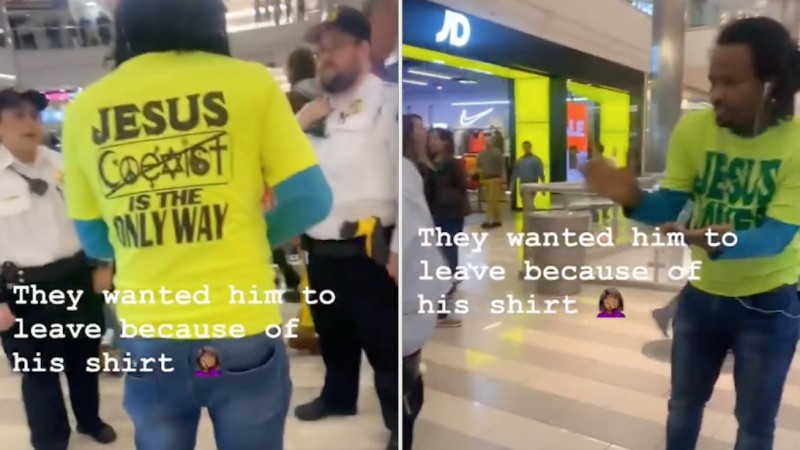 Alex Timothy
Jan 16, 2023 minute read
ADVERTISEMENT
ADVERTISEMENT
A man wearing a "Jesus Saves" T-shirt was approached by security and told that he must remove the item of clothing or leave Mall of America, in a video clip that has gone viral on social media.

The security guard can be heard explaining to the man that "Jesus is associated with religion and it's offending people," telling him, "If you want to shop here you need to take off that shirt."

The video was recorded on January 7 at the Mall of America, in Bloomington, Minnesota, and has since provoked outrage across the internet, with people allegedly planning to wear their own "Jesus Saves" T-shirts at the mall as a protest, the Daily Mail reports.

A spokesman for Mall of America told the Daily Mail that the man was ultimately allowed to continue shopping while still wearing the shirt, but the more than two minutes of berating that the man has to endure from mall security certainly don't suggest that ending.

The back of the shirt says "Jesus is the only way" written around a crossed-out version of the popular "coexist" symbol, which advocates for multi-religion harmony.

One week prior to this incident, the man had been issued a 24-hour trespass for allegedly "soliciting guests."

On this occasion, he was merely walking around the mall while wearing the shirt.

"Again, I'm giving you a couple options. You can take the shirt off and you can go to Macy's and you can do your shopping. Or you can leave the mall, OK? Those are your only options right now," the guard says.

The guard claimed that the man was "religious soliciting," but the man can be heard in the video vehemently denying that.

Another user said that "If I ever go to the Mall of America again, I'm wearing the biggest Jesus shirt I can find."