Mayor celebrates BLM protests, then calls them 'domestic terrorism' when her home is vandalized

Olympia mayor Cheryl Selby has been a backer of the protests that spread across the country amid the death of George Floyd, but when these same people vandalized her home, she called it "domestic terrorism." 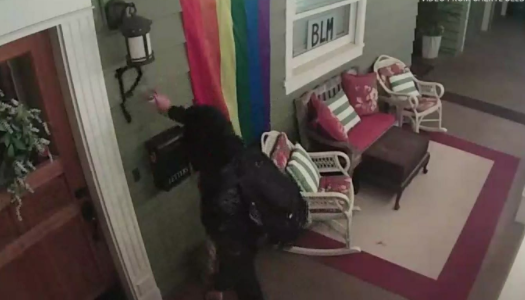 Mayor of Olympia, Washington, Cheryl Selby, has been a vocal proponent of Black Lives Matter and backer of the protests that have spread across the country amid the death of George Floyd, but when these same people vandalized her home, she called it "domestic terrorism."

This same retraction of endorsement for the behaviour of the protesters and rioters happened with ESPN sportswriter, Chris Martin Palmer, who initially supported the riots in Minneapolis, but called those same people "animals" when they came for his home.

One group was made up of about 50 people dressed in black to recreate a protest that had previously occurred in the area. And a second group was comprised of about 30 people who were wearing neon-yellow T-shirts, referring to themselves as the "peacekeepers," who cleaned up after the people in black.

“The black-clad group marched to City Hall before making its way through downtown Olympia. The protesters took trashcans and ‘ROAD WORK AHEAD’ signs from parking lots and sidewalks, dragging them into the streets and flipping them on their sides. The ‘peacekeepers’ then put them back while the other group heckled them," according to the Daily Wire.

The group dressed in black made its way to Selby's South Capitol neighbourhood, chanting "abolish the police" outside her home as someone spray-painted "BLM" on her door and porch.

A nearby man reportedly was able to get the protesters to leave.

Though the group finally did leave, they returned to downtown, "spray painting store fronts, street signs, lamp posts and sidewalks."

Although neither Selby nor any part of her family was home at the time, she received text notifications from neighbours letting her know about the vandalism.

“It hurts when you’re giving so much to your community,” she added.

Selby's home was also targeted a couple years ago by protesters, during a May Day protest. The protesters chanted about her and distributed leaflets.

Though she is a progressive Democrat, she has been targeted by members of her own political party, and she said she worries for her neighbours who have small children.

“People have so little grace for each other right now. We need to have more grace,” Selby said.

She added that "it's pretty traumatic when somebody comes to your home."

Selby released a statement earlier this month, explaining that she would not institute a curfew as a way for protesters and rioters to sympathize with the death of Floyd.

“Every day since his murder, our country has shaken,” Selby said. “Convulsing between fear, rage, and nausea. We should feel sick. Those of us who hold the most microphones in our communities should feel nauseous.”