"Continuing our support for Ukraine is morally right, but it is not only that. It is also a direct investment in cold, hard, American interests," McConnell wrote. 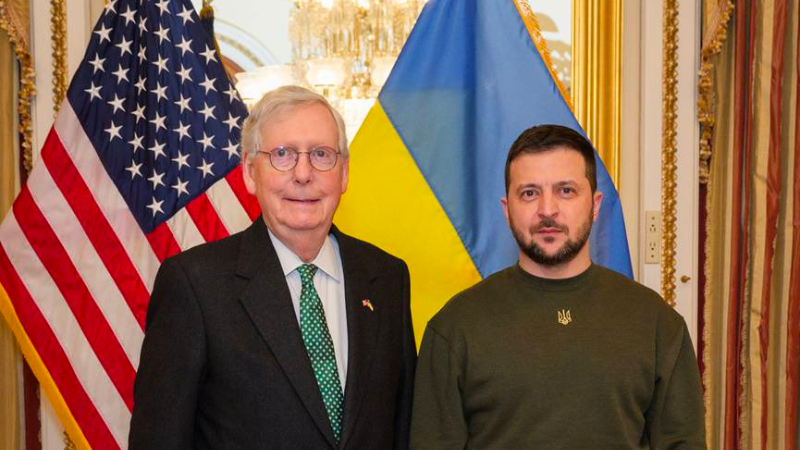 Olivia Rondeau
Dec 24, 2022 minute read
ADVERTISEMENT
ADVERTISEMENT
On Saturday, Senate Minority Leader Mitch McConnell shared a picture of himself and Ukrainian President Volodymyr Zelensky on Twitter, along with the claim that the billions sent in aid is a "direct investment in cold, hard, American interests."

"Continuing our support for Ukraine is morally right, but it is not only that. It is also a direct investment in cold, hard, American interests," McConnell wrote.

The total cost of U.S. involvement in Ukraine is now over $100 billion with the Kiel Institute for the World Economy's Ukraine Support Tracker reporting $54.43 billion already sent and an additional $47 billion on its way after President Joe Biden signs the $1.7 trillion end-of-year federal spending bill.

The Ukrainian leader delivered an address to U.S. Congress on Wednesday, saying that the billions already provided are "not enough."

After thanking Congress for providing his country with American taxpayer dollars, he added "Is it enough? No, not really."

The backlash to the Senate Republican leader's post was strong.

"I'd love to see you come out of your shell long enough to explain how exactly funding proxy war with Russia over breakaway regions Ukraine would have agreed to cede back in April classifies as 'Cold Hard American Interests," wrote political commentator Malcolm Flex.

CBS reporter Tatjana Pasalic also chimed in, criticizing the Kentucky senator's use of the term "investment."

"If I asked my personal investor where exactly is all my money going, I could probably get a detailed spreadsheet by the end of the week," she posted. "I highly doubt our government can show where the money they keep sending to Ukraine is actually going. Why? Where is the transparency?"

"How? Be specific," asked Viva Frei