"It's no wonder that 92 percent of CMS graduating seniors aren't college or career ready when you're instructing them on how to give blow jobs and handies instead of teaching them how to add and subtract," Wade told the assembled board members. 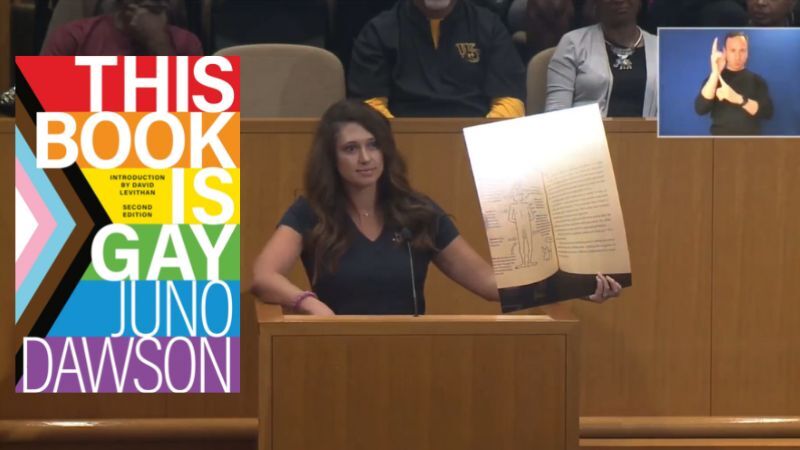 A North Carolina mother read pornographic excerpts from a book available to seventh graders in the Charlotte-Mecklenburg School Board during a board meeting Thursday.

"'This Book is Gay' by Juno Dawson was found in a seventh grade classroom at Collingswood Middle School. It was also on the ELA recommended reading list for seventh graders at Jay M. Robinson," began local mother Christy Wade.


She then proceeded to read an excerpt from a chapter titled The Ins and Outs of Gay Sex.

"Perhaps the most important skill you will master as a gay or bi man is a timeless classic: the hand job. Good news is you can practice it on yourself. The bad news is each guy has become very used to his own way of getting himself off," Wade read.


"Learning how to find a partner's personal style can take ages. But it can be very rewarding when you do. Something they don't teach you in school is that in order to be able to come at all, you or your partner may need to finish off with a 'handy,'" Wade continued. "A lot of people find it hard to come through other types of sex. That is fine and certainly not something you have to apologize for."

Juno Dawson faced criticism in 2015 upon publication of the book. Dawson announced a transgender identity shortly after the controversy and later told Attitude Magazine: "I think there are a lot of gay men out there who are gay men as a consolation prize because they couldn’t be women. That was certainly true of me."

Next, Wade read some explicit tips for how to please a partner. At least one person in attendance at the meeting can be seen covering his ears while Wade reads the material available to seventh graders.

"A good handy is all about the wrist action. Rub the head of his cock back and forth with your hand. Try different speeds and pressures until he responds positively. A bad handy is grasping his penis and shaking it like a ketchup bottle," Wade read out.

"Finally, my misunderstanding about rubbing two peens together wasn't far off the mark. Rubbing them together in one hand feels awesome: mega-combo handy, trademark pending."

Wade is not the first parent to object to Dawson’s book being available to children. In 2015, a mother in Wasilla, Alaska complained to her local library after her 10-year-old son pulled the appealing rainbow-colored book off the juvenile nonfiction shelf, the Frontiersman reported at the time.

This is also not the only sexually-explicit book to have found its way onto school library shelves. Parents and groups all across the country are objecting to the sexual content their children are being exposed to, such as those in Maine and Rhode Island who recently objected to Gender Queer by Maia Kobabe being on school shelves.

"It's no wonder that 92 percent of CMS graduating seniors aren't college or career ready when you're instructing them on how to give blow jobs and handies instead of teaching them how to add and subtract," Wade told the assembled board members.

"Superintendent, you say that this book was, quote, 'brought into the classroom by a teacher with no intent to allow students to have access.' Any teacher that puts material like this on his or her bookshelf is either a bad teacher or a pedophile who grooms children."

Christopher Rufo came up with a suggestion for a simple solution to issues such as this.

"School districts should adopt a simple policy: pornographic and sexually explicit content is not permitted in the classroom and the school library," he tweeted. "That's not a 'book ban'—it's a common-sense, age-appropriate restriction supported by 79 percent of the public."

"We will vote you out on November 8th," Wade concluded, after she was cut off before getting to the end of her speech. "You are not leaders."