A man who was arrested twice during riots on the same day in Portland is closely affiliated with Antifa, The Post Millennial can report. 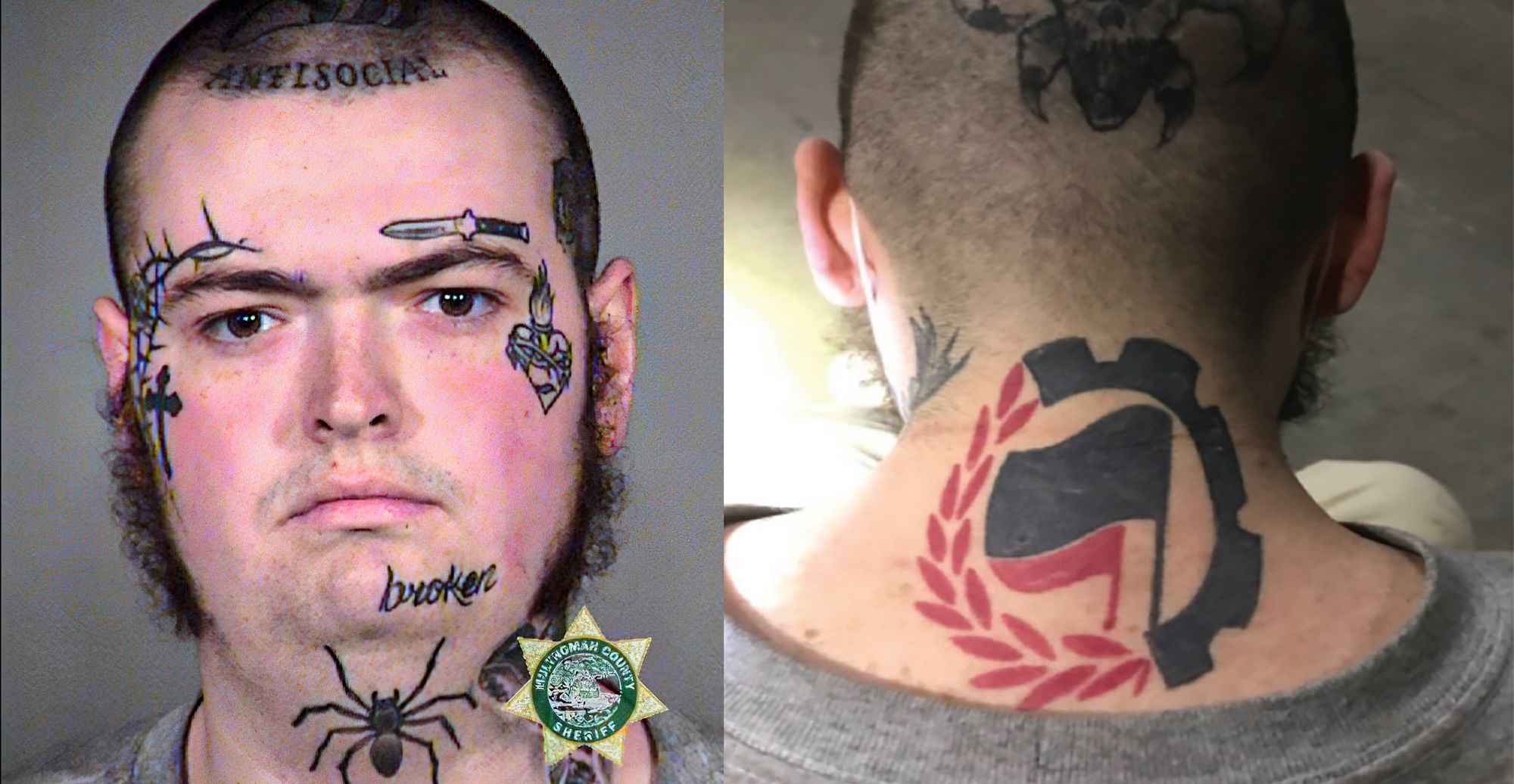 Update: In the federal criminal complaint against Darby Howard, it is revealed that he has a large Antifa tattoo on his neck.

A man who was arrested twice during riots on the same day in Portland is closely affiliated with Antifa, The Post Millennial can report.

Darby Marshall Howard, 22, of Helena, Mont., was first arrested for felony first-degree criminal mischief and resisting arrest Thursday afternoon. Howard was allegedly part of a group of several-dozen far-left intruders who broke inside the lobbies of a Chase Bank and Wells Fargo in downtown Portland. Shocking footage outside one of the banks showed a crowd of people violently shoving a security guard who then brandished a handgun.

Howard’s online social media presence shows he is affiliated with antifa. He formerly used the moniker “Kapt Mao,” and his frequently-used avatar was of an antifa logo. He is a member of RASH — Red and Anarchist Skinheads — an antifa fighting group with a presence in the Portland-area. Howard told court officials he’s been homeless for the past month and in Portland just over two weeks, The Oregonian reported.

At Wells Fargo, the protesters occupied the lobby before causing damage to property. Howard was caught on security footage allegedly smashing a television and kicking the automatic sliding door.

The mob then made their way to the Mark O. Hatfield U.S. Courthouse, where they tried to break into the lobby. The federal courthouse was the site of weeks of mass rioting in summer 2020 when Black Lives Matter-Antifa extremists tried to burn down the building. A heavy-duty security barrier was erected around the property and stood for more than eight months before being dismantled this week. But that proved to be premature as rioters immediately targeted the courthouse again.

Howard was recorded on video trying to force open the doors to the courthouse and screaming at the staff inside. The violence prompted federal officers to respond. Howard was arrested during this encounter, where he resisted arrest and allegedly punched an officer in the head. But within hours, Howard was released without bail from the Multnomah County jail. He returned to a snap night riot outside the courthouse that was organized by Antifa.

At the second riot, around 50 Antifa extremists set fire to the courthouse and ripped off some of the plywood that was installed just hours prior. An exposed glass window was shattered and graffiti was sprayed on the building again.

“We will destroy you,” read one message. Another read, “Fascists live here.”

A man wearing similar clothing to Howard earlier in the day was recorded smashing the building with a scooter.

Federal officers responded to the riot with pepper balls and smoke. They made several arrests. Howard was filmed trying to escape on foot but he was tackled and arrested.

Howard is being detained at the Multnomah County Detention Center under a U.S. Marshals hold. His arraignment is scheduled for March 15.

Though most riot-related cases have been dropped by the Multnomah County District Attorney, Mike Schmidt announced on Friday that his office was moving forward to prosecute Howard. An additional charge of attempting to assault a public safety officer was added to his charging document.