In response to the mother’s concerns, Conejo Valley Unified School District Superintendent Dr. Mark McLaughlin told the assembled meeting that the incident doesn’t sound like "anything outside the norm." 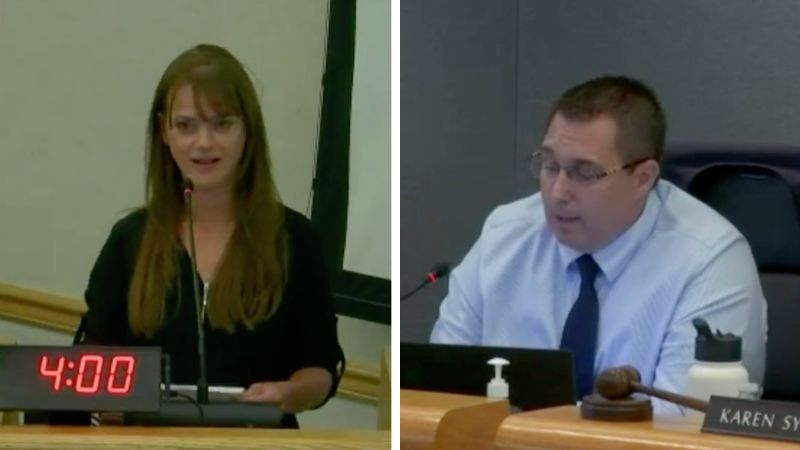 "I only know this because my daughter told me in the car when I picked her up, saying her friend said they were disturbed, traumatized, and scared."

"The principal reported the incident to the district office. I’ve heard not from any one of them," she continued.


"They let children write the dress code," the mother continued, noting other subjects taught in the school district, like sex education at young ages, gender identity, and sexual orientation.

The mother also noted that the school district facilitates the gender transitions of students without the knowledge or approval of the parents.

In response to the mother’s concerns, Conejo Valley Unified School District Superintendent Dr. Mark McLaughlin told the audience that the incident doesn’t sound like "anything outside the norm."

After being asked whether the school district allowed such an incident to take place, McLaughlin said, "So I would say that this itself is a confidential issue. It’s a student, I don’t think any of you would want us up here chatting about an issue that took place with your child."

McLaughlin noted his time as a former elementary and middle school principle, saying "I would say that at least once a year, this comes up for both males and females within a schools setting. And so I don’t think that this is anything outside the norm that would take place."

"I just would note, you know, when we have a student that may be touching themselves in their jeans, in their pants pocket, or whatever, you know, this is usually an issue that’s discussed with the parent at home if they’re aware of it," McLaughlin said after shouts of disagreement from he crowd.

"I will say that there’s also other emotional issues and psychological things that students are working through," he added. "And that’s, you know, sometimes parents will find out that there may have been something dramatic that happened to that child, things like that."

McLaughlin concluded by saying that he wouldn’t be going into further details.