MUST WATCH: Joe Biden says 'She was 12, I was 30' to laughs and cheers from Democrat audience 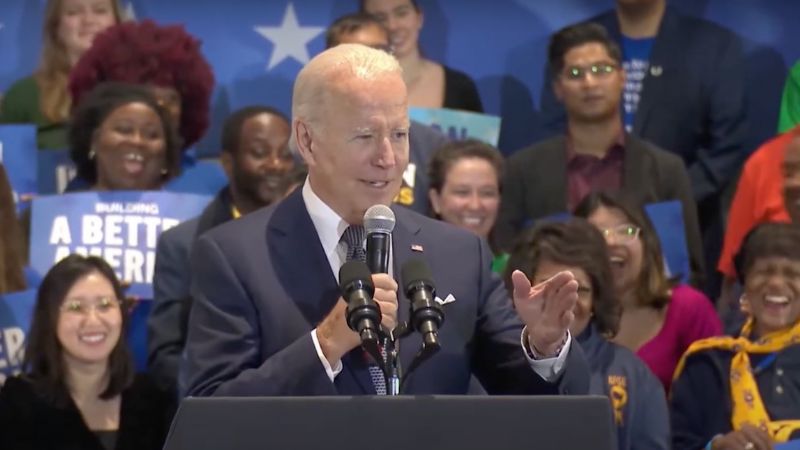 Joshua Young Youngsville North Carolina
Sep 24, 2022 minute read
ADVERTISEMENT
ADVERTISEMENT
President Joe Biden was speaking at a rally on Friday hosted by the National Education Association, the largest teacher's union in the US, when he pointed to a woman in the audience who apparently did not greet him.

"You gotta say 'hi' to me," Biden said. "We go back a long way. She was 12, I was 30. But anyway, this woman helped me get an awful lot done." The crowd guffawed at the remark, unquestioning as to how much a 12-year-old girl could help a grown man accomplish.

According to the New York Post, the comment was "confounding and seemingly inappropriate." Biden did not clarify the nature of his relationship with the woman when he was an adult and she was a child.

Biden was ostensibly at the rally to articulate a response to the GOP's "Commitment to America" campaign platform rolled out earlier by House Republicans led by Kevin McCarthy. He interrupted himself in the middle of his rebuttal when he saw the woman and recollected whatever it was he did with her as a child.

Joe Biden has garnered an auspicious reputation, even in establishment media, as having a habit of inappropriately touching and sniffing women and young girls in public. Even Saturday Night Live lampooned this habit in 2021.

According to MSN and the Daily Mail, a leaked diary from Joe Biden's daughter, Ashley, alleges that Joe Biden took showers with her when she was a child that were "probably not appropriate."

In 2020 a former Senate aide, Tara Reade, who filed a police report against him for allegedly assaulting her in 1993, came forward to detail how she was allegedly sexually assaulted by Joe Biden.

The Post recounted how Joe Biden has warranted the nickname "Creepy Joe."