America's school boards are suggesting that parents who oppose their curriculum and Covid-safety mandates are like domestic terrorists. 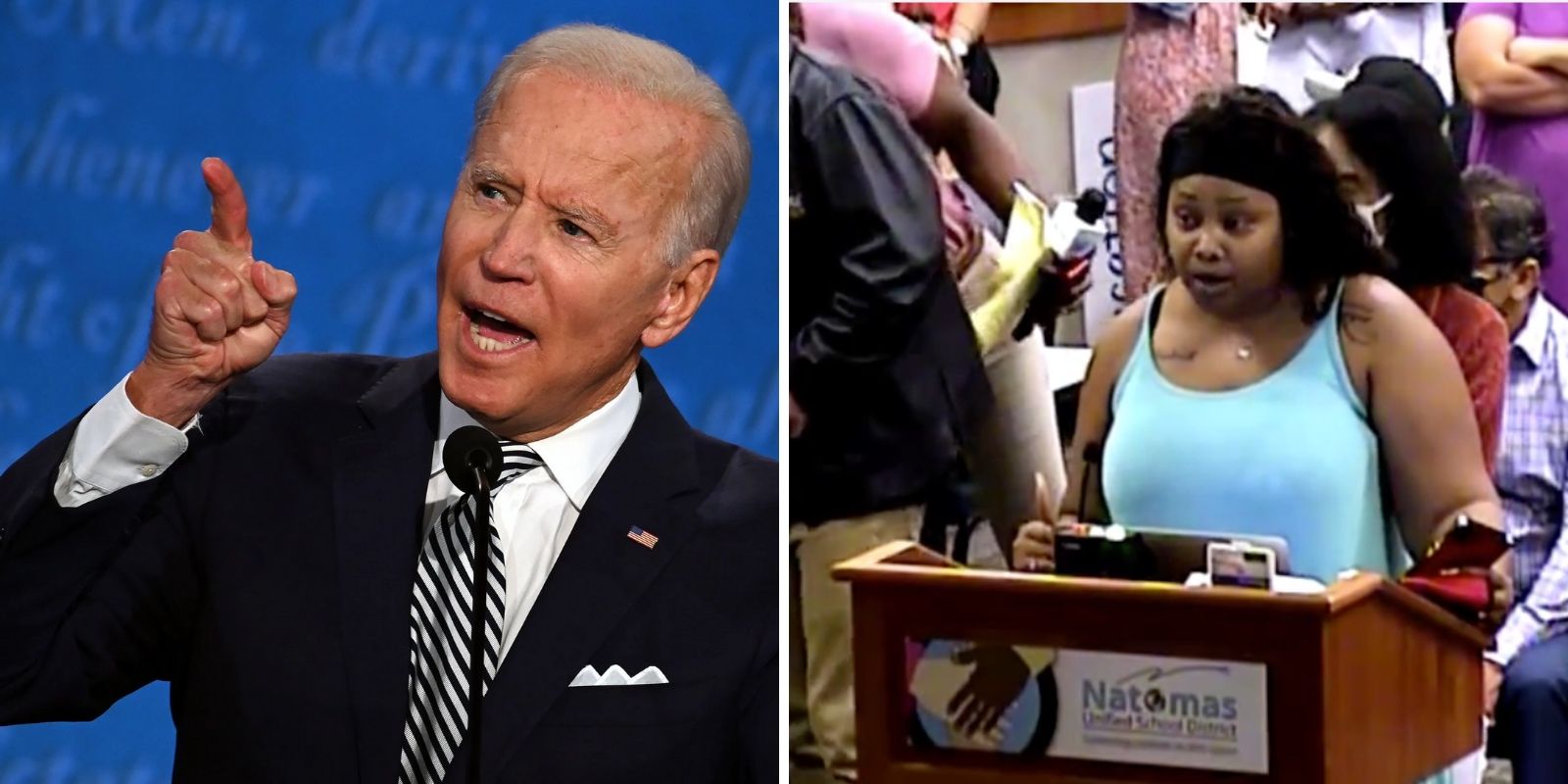 As school boards across the country have faced increasing backlash from parents over the past year, they have asked President Joe Biden to step in, suggesting that those parents who oppose their curriculum and Covid-safety mandates are like domestic terrorists who are guilty of hate speech.

Education Week reports that the National School Boards Association sent a letter to Biden suggesting that the Patriot Act be enforced against these unruly parents who keep showing up to meetings across the country demanding answers and accountability from the very school boards that control their children's education.

"America's public schools and its education leaders are under immediate threat," the letter begins. As such, it goes on, the National School Boards Association "respectfully asks for federal law enforcement and other assistance to deal with the growing number of threats and violence and acts of intimidation occurring across the nation."

The NSBA doesn't want parents showing up to hold them accountable anymore, and they want law enforcement and the federal government to crack down on parents who are demanding their children be provided with an appropriate and worthwhile education.

The school board in Loudoun County, Virg., is so afraid of parents coming to speak out against their poor handling of the educational system that they have implemented new policies to try to keep them out. It doesn't work. A Minnesota school board was slammed for allowing curriculum that urged students to role play in same-sex relationships. Another school board faced criticism over writing prompts that encouraged minors to share their sexual experiences.

School board officials are afraid of their constituents, and for good reason: a New York superintendent was ousted by parents due to the prevalence of critical race theory in the district. Another school board member opposed a resolution that would have honored those killed by terrorists on 9/11.

A school board in Ontario, Canada, held a book burning. The school board actually advocated and facilitated the burning of books.

A school board in California was held to account by parents and community members after it was discovered that a history teacher was teaching students that America is a hateful place and had raised the Antifa flag in the classroom. These parents demanded answers, so the school board walked out.

An Orange County school board heard from a parent about the detrimental impacts of critical race and critical gender indoctrination. A Colorado Springs parent demanded answers on this kind of curriculum as well. An Oregon mom was so fed-up that she took her child and moved to Texas so he could get a proper education.

Immigrants, black parents, white parents, moms and dads, as well as concerned community members, have all spoken out at school board meetings. Many of these meetings have been remote, only available on Zoom, and parents in those areas have been unable to ask questions outside of the chat, where they may or may not be answered. Parents want answers, and they have been tired of not getting them. Instead of facilitating answers, or looking into parents concerns, or dealing with the failure of their own management, the NSBA has gone to complain to the federal government.

White House Press Secretary Jen Psaki fielded a question about the letter during a briefing on Thursday. She was asked if the president is considering offering the help that the NSBA requested.

"First," Psaki said, "let me say we take the security of public servants and elected officials across the country very seriously. And obviously these threats to school board members is horrible, they're doing their jobs."

"Obviously," Psaki continued, "there are going to be different law enforcement authorities that will be related to each community, and where this is happening, so we'd certainly refer you to them about any specific threats. And we'd encourage individuals to report any threats they face to local and state law enforcement agencies, and we're continuing to explore what more can be done from across the administration. A lot of this will be local law enforcement and how they can help ensure that these local school board members feel protected."

The NSBA "believes immediate assistance is required to protect" students, school board members, and educators who, they write, "are susceptible to acts of violence affecting interstate commerce because of threats to their districts, families, and personal safety." In demanding action from the federal government to control the unruly parents who simply want the best education for their children, the NSBA intones the Interstate Commerce clause as a way to slide the federal government into the domain of hyper-local school board meetings.

Parents showing up to express, often with intensity, their displeasure at the mismanagement by school boards of school districts could be "the equivalent to a form of domestic terrorism and hate crimes," the letter states.

"As these acts of malice, violence, and threats against public school officials have increased, the classification of these heinous actions could be the equivalent to a form of domestic terrorism and hate crimes," the letter reads. "As such, NSBA requests a joint expedited review by the U.S. Departments of Justice, Education, and Homeland Security, along with the appropriate training, coordination, investigations, and enforcement mechanisms from the FBI, including any technical assistance necessary from, and state and local coordination with, its National Security Branch and Counterterrorism Division, as well as any other federal agency with relevant jurisdictional authority and oversight."

The NSBA cites a number of incidents that happened across the country this year, both in the wake of the revelations that American school children were being taught based on the divisive tenets of critical race theory and the Covid-inspired restrictions, wherein school board meetings became unruly. They cite their worry for their own safety, and for what they believe are their own educational standards.

Reporting on this issue from Reuters seems decidedly in favor of the NSBA's ask, as they write that "debate over measures such as mask mandates and COVID-19 vaccines in schools has been a flashpoint for US school districts grappling with how to keep students and staff safe during the pandemic."

Reuters reports that "Parents and community members also have bombarded board meetings with complaints that critical race theory, which has been largely misunderstood, is being used to promote anti-white, anti-American views.

This "news" reporting from Reuters leaves out some very key facts, as does the letter from the NSBA, which is that school boards across the country have been recalcitrant and dismissive of parents concerns, have intentionally gone against parents's wishes as regards the teaching of critical gender theory, critical race theory, as well as Covid-restrictions and stringent guidelines.

NBC News simply reported that protests by parents at school board meetings is just a function of white supremacy.

Parents across the country have been horrified by the treatment of both students and school district constituents over these issues. Countless parents have tried to reason with school boards, tried to tell them that they don't want biological boys competing in girls sports, that they don't want divisive, racially-charged progressive educational theories implemented in classes, and many, such as Moms for Liberty, and other groups, have fought back against Covid-inspired restrictions that both don't mitigate Covid spread and do intensive psychological damage to students.

The remote schooling that was implemented during the pandemic in so many areas of the country showed parents the truth of the educational system, and those who are to blame for the stiflingly poor educational system is, in many areas, the school board.

School boards are elected officials, and in most places, already low voter turn-out is scant for these hyper-local elections that few people, until this past year, actually cared about. Now, in the wake of their own horrendous failures, they want the federal government to protect them from the constituents they have utterly failed.

Update: The Associated Press weighed in on the matter, stating that the claim that "The National School Boards Association is asking the Biden administration to label parents who protest school policies domestic terrorists" was "false." The AP said that the NSBA was not asking the Biden administration to label angry, concerned parents as "terrorists," but was instead asking for an investigation into threats that "could be the equivalent to a form of domestic terrorism and hate crimes."

Attorney General Merrick Garland said in a memo that he is "directing the Federal Bureau of Investigation, working with each United States Attorney, to convene meetings with federal, state, local, Tribal and territorial leaders in each federal judicial district within 30 days of the issuance of this memorandum. These meetings will facilitate the discussion of strategies for addressing threats against school administrators, board members, teachers, and staff, and will open dedicated lines of communication for threat reporting, assessment, and response."