MUST WATCH: Martha’s Vineyard residents CHEER as illegal immigrants shipped out: ‘They enriched us’

Residents of Martha’s Vineyard could be see cheering, clapping, and waving as the immigrants left town, with some even running alongside the buses. 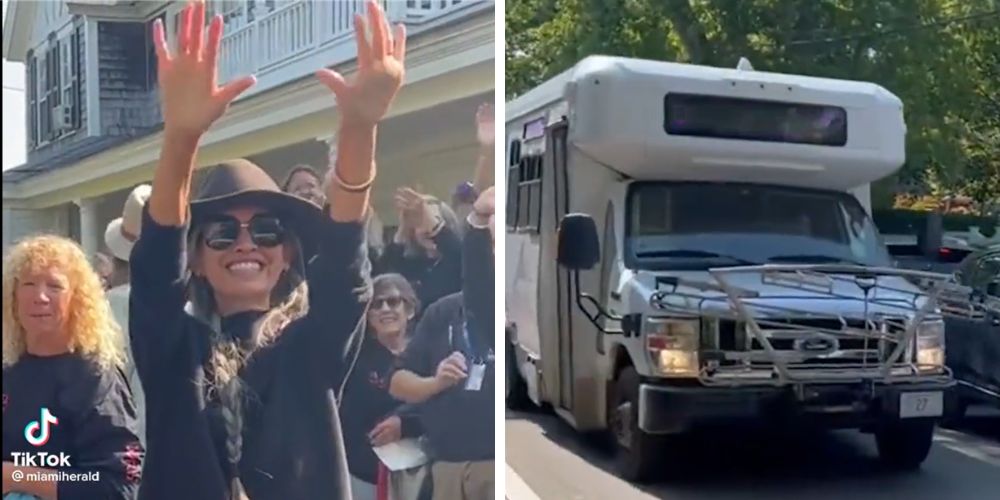 Ari Hoffman Seattle WA
Sep 19, 2022 minute read
ADVERTISEMENT
ADVERTISEMENT
Residents of the elite summer vacation spot Martha’s Vineyard, Massachusetts could be seen cheering as illegal immigrants were bussed off of their island to military housing on Cape Cod. This after Florida Governor Ron DeSantis, in an effort to highlight the issue of border states and towns being overrun by border crossers, sent 50 illegal immigrants to Massachusetts. Residents begged for help.

"The year round community is very strong because you are kind of isolated here—whether it's the ferry or the bad weather, you're stuck here," Sean O'Sullivan, a volunteer with the Harbor Homes nonprofit said. "We're used to helping each other. We're used to dealing with people in need and we're super happy—like they enriched us, we're happy to help them on their journey."

O'Sullivan helped disassemble the folding cots that 18 of the male migrants slept on in the parish hall, CNN reported.

The move was decried as anti-humanitarian as the 50 people caused great disruption and grievance to the tiny island, that boasts 17,000 year-round residents, increasing to more than 200,000 during the summer tourist season. Actor George Takei went so far as to say that Martha's Vineyard was akin to an internment camp, while documetarian Ken Burns suggested DeSantis was like Hitler, all for sending 50 illegal border-crossers to a beautiful, exclusive island in a self-declared sanctuary state.

It was on Wednesday, Florida Republican Governor Ron DeSantis sent two planes carrying 50 illegal immigrants to the playground for the rich and famous in an attempt to highlight the massive influx of illegal immigrants at the US southern border, which has overwhelmed border towns and exhausted their resources.

In response to the illegal immigrants showing up in town, Martha’s Vineyard activated the National Guard and after less than 48 hours, the 50 migrants were loaded onto buses and put on a ferry to the Massachusetts mainland bound for military housing at Joint Base Cape Cod, a former Air Force base known locally as Otis Air Base, an official at the administrative office of Duke’s County confirmed.

Massachusetts Republican Governor Charlie Baker said in a statement that up to 125 members of the Massachusetts National Guard were activated “as part of this relief effort."

"The Massachusetts Emergency Management Agency (MEMA) is coordinating efforts among state and local officials to ensure access to food, shelter and essential services for these men, women and children," Baker said.

Some encouraged former President Barack Obama to offer up his $12 million Vineyard vacation home for shelter for the mostly Venezuelan nationals.

Local Democratic officials posted pictures of the illegal migrants being housed in a church because apparently none of those vacation homeowners offered to shelter the migrants, despite many homes standing empty after the end of the summer season.

St. Andrew’s Church in Edgartown provided care and shelter for the migrants after they landed in Martha’s Vineyard before they were shipped out to Cape Cod.

A GoFundMe page was created the day after the migrants arrived by Sarah Goulet, a wealthy Democratic socialite, organizing on behalf of the Martha's Vineyard Community Foundation titled "Urgent plea to help Martha's Vineyard migrants," and has so far raised over $41,000, shooting past their initial goal of $30,000.