The woman, who wants to remain anonymous for safety reasons, said that seeing the symbol was “disturbing,” then filing a complaint to the Toronto Police Hate Crime Unit during the Fall, hearing back from them around the end of October. 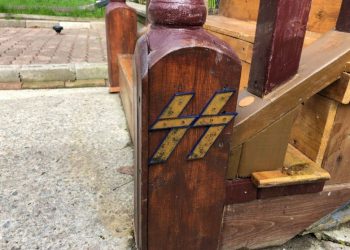 A Jewish woman was walking through the Toronto neighbourhood of East Danforth when she noticed a menacing emblem on a home’s porch in August of 2018.

The symbol, made from wood and nailed to the home’s front stairs, was strikingly similar to the SS Nazi symbol. The double lightning bolt symbol, which is called a Schutzstaffel, was used from 1925 to 1945 and was used by the Nazi’s Protection Squadron.

The SS were the chief organizers of the systematic extermination of an estimated 17 million people, 6 million of which were Jewish.

The woman, who wants to remain anonymous for safety reasons, said that seeing the symbol was “disturbing,” then filed a complaint to the Toronto Police Hate Crime Unit during the Fall, hearing back from them around the end of October.

“You may be able to imagine how the Jewish community is feeling right now. You may not. Regardless, this is the sign of real brazen hatred,” she said in a follow up email, again written towards the end of October.

The unit then told the woman to report it to police in her division, but she didn’t follow up immediately.

According to the National Post, a visit to the home saw that the emblem had changed, having been covered with a smooth glass plating and painted with a dark blue outline. When the homeowner was asked about the meaning of the symbol, he stated that it was “just for fun” and that his son had painted in in the summer of 2018.

Police then visited the home the next day, only to find the symbol had been removed.

“When someone complains about an incident, whether it’s a criminal act motivated by discrimination or hate speech, a police report is filed and officers investigate,” said Detective Constable Kiran Bisla.

Though the symbol is gone, the woman says she’s still concerned that a threat may linger.

“I certainly feel that there is a white supremacist living in our neighbourhood and I do hope [the police] keep that on their records in case any incidents happen,” she wrote.