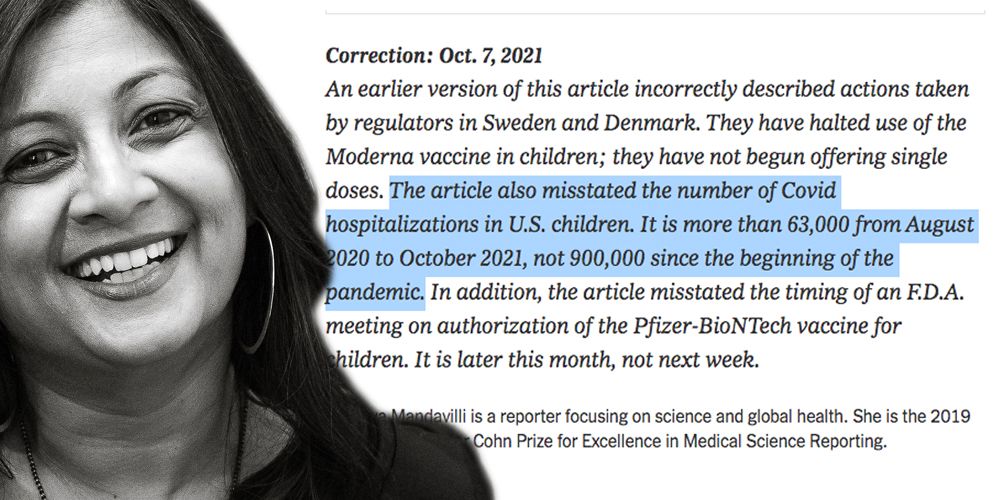 An article by New York Times health reporter Apoorva Mandavilli received a wave of social media attention over a series of errors made in the piece.

The biggest of blunders was an explosive claim that alleged 900,000 children in the United States had been hospitalized since the beginning of the COVID-19 pandemic. A day later, the paper acknowledged the error.

The correction dated Oct. 7 reads: "An earlier version of this article incorrectly described actions taken by regulators in Sweden and Denmark. They have halted use of the Moderna vaccine in children; they have not begun offering single doses. The article also misstated the number of hospitalizations in U.S. children. It is more than 63,000 from August 2020 to October 2021, not 900,000 since the beginning of the pandemic. In addition, the article misstated the timing of an F.D.A meeting on authorization of the Pfizer-BioNTech vaccine for children. It is later this month, not next week."

The main topic of the piece was how countries around the world were contending with COVID-19 vaccine side effects in children. It mainly focused on how various governing health bodies and research experts are assessing the risk of myocarditis (heart inflammation).

Independent journalist Glenn Greenwald tweeted a reminder that the New York Times had an "outstanding, highly experienced" COVID-19 reporter that got sacked in a fiasco earlier this year.

It's not the first time this year that New York Times reporter Apoorva Mandavilli has faced COVID-19 retraction controversy.

Back in May when the re-emergence of lab leak theory was the topic of discussion on social media, Mandavilli lamented in a tweet: "Someday we will stop talking about the lab leak theory and maybe even admit its racist roots. But alas, that day is not yet here." The tweet was deleted hours after posting.