North Carolina county stocks up on AR-15s for every school

Each school will have a safe that houses an AR-15 and a breaching tool, a reaction to the poor law enforcement response during the Uvalde, Texas child massacre. 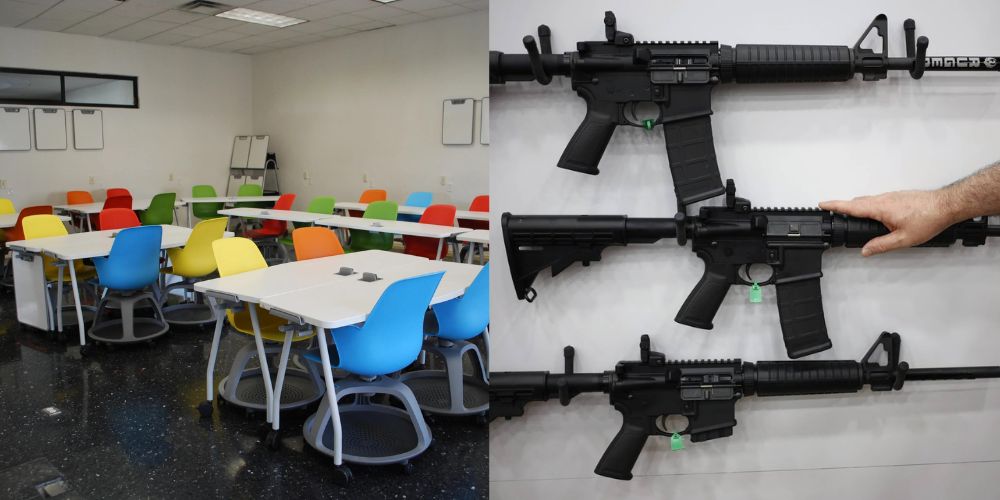 Madison County schools in North Carolina, which are part of the Asheville statistical area, are going to have AR-15 rifles at every location for the 2022-2023 year to help prevent a tragedy like the one in Uvalde, Texas.

In an article published Friday by the Asheville Citizen Times, Sheriff Buddy Harwood said, "We were able to put an AR-15 rifle and safe in all of our schools in the county." Harwood went on to say that they put breaching tools in the safe along with extra magazines with ammo.

"The reason we put the breaching tools in the safes is that in the event we have someone barricaded in a door, we won't have to wait on the fire department to get there," Harwood said.

The Sheriff said of the Uvalde, Texas officers, "Those officers were in that building for so long, and that suspect was able to infiltrate that building and injure and kill so many kids. I just want to make sure my deputies are prepared in the event that happens."

On May 24, gunman Salvador Ramos entered Robb Elementary School at 11:33 am and massacred 19 children and two teachers. Police were on the scene in minutes but did not charge the unlocked classroom door behind which Ramos hid. Before Ramos was eventually killed at 12:50 pm, almost an hour and a half later, over 400 law enforcement arrived on the scene, held back, and detained parents while their children were dying and begging to be saved. Uvalde School District Police Chief Pete Arredondo yelled "Tell them to f*cking wait."

Madison County Schools Superintendent Will Hoffman said that school administrative staff had been meeting with Harwood and law enforcement to implement the new safety measures and that school resource officers (SRO) were training with Asheville-Buncombe Technical Community College firearm instructors and police.

Sheriff Harwood said, "I'm a firearms instructor. We carry a (9 mm) 135-grain bullet," and "We've got the maximum 50 rounds that my SROs are carrying throughout the school to protect that school."

According to the Asheville Citizen Times, Superintendent Hoffman made sure law enforcement could monitor school camera systems and, in late July, met with school officials and the county's Emergency Operations Center about the new safety measures being implemented.

Harwood said, "I hate that we've come to a place in our nation where I've got to put a safe in our schools, and lock that safe up for my deputies to be able to acquire an AR-15. But, we can shut it off and say it won't happen in Madison County, but we never know."

The Sheriff noted that his staff have had two training sessions for a live scenario and another will be held on August 17. "The scenario will incorporate all of our teachers, just to prepare them what to look for in the event we have to come into a school," Harwood said.

The AR-15 rifles are one of a few new safety initiatives as SROs will be at every single school in the county as well as a school safety liaison, social workers, and school counselors. Each school will also have a panic button that will notify the monitoring center and Sheriff's office if pressed.

"I want the parents of Madison County to know we're going to take every measure necessary to ensure our kids are safe in this school system. If my parents, as a whole, want me to stand at that door with that AR strapped around that officer's neck, then I'm going to do whatever my parents want as a whole to keep our kids safe," the Sheriff said.