The 26-year-old took to the stage on Wednesday with two female backup dancers to perform his "Itsy Bitsy" rap in Albania's capital, containing such lyrics as "wanna twerk that a** and shake them titties." 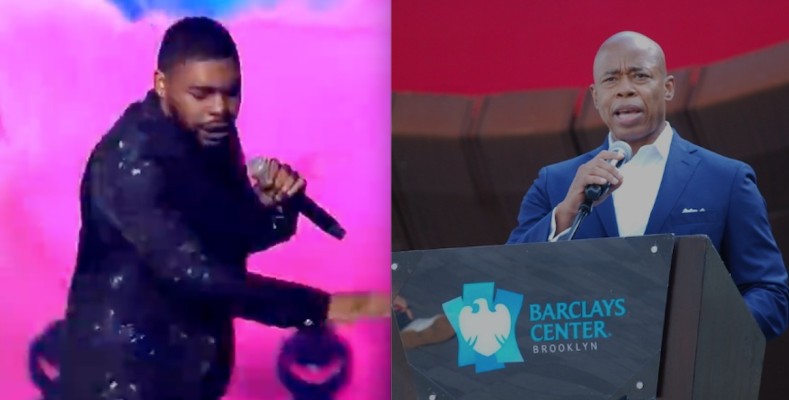 Alex Timothy
Nov 25, 2022 minute read
ADVERTISEMENT
ADVERTISEMENT
The son of New York City Mayor Eric Adams has taken his burgeoning rap career to the Balkans, where he is competing in the Albanian equivalent of "American Idol."

Jordan Coleman, who raps under the name "Jayoo", performed on Wednesday night at the annual contest in the country's capital city of Tirana, the New York Post reports.

The 26-year-old, who is "looking to be an international rap artist," took to the stage with two female backup dancers to perform his "Itsy Bitsy" rap, containing such lyrics as "wanna twerk that a** and shake them titties."

"I support it sh*t, she gorgeous. Still she gotta stay committed. She would miss the life. If she gave it up, but won’t admit. Free admission taking trips and getting lit, until you gettin dizzy," his track opens with.

It is not known whether or not his father tuned in for his performance, as the two have reportedly had disagreements over some specifics of rap music before.


According to the New York Post: "Kënga Magjike, the American Idol-style competition that translates to 'Magic Song,' is an annual contest run by television channel TV Klan that welcomes both Albanian and international performers."

"We are alarmed by the use of social media to really over-proliferate this violence in our communities," he expressed at the time. "This is contributing to the violence that we are seeing all over the country. It one of the rivers we have to dam."

He also said at the time that he "had no idea what drill rapping was. My son [Coleman] sent me videos. It was alarming."

Coleman, who works at Jay-Z's Roc Nation agency in the film department, rebuked his father afterward for his comments.

"I have drill rappers on our label as clients, and I like drill music," Coleman allegedly said via text message to his dad. "You cannot ban a genre. And I’m not sure why you said what you said, but I disagree."

Drill rap is a gritty, nihilistic style of rap music that originated in Chicago, which tends to have dark, violent themes, often including murder with semi-automatic weapons.

Following Coleman's performance, a pool of artists will be chosen via a voting system to compete in the competition’s finals on Saturday.
ADVERTISEMENT
ADVERTISEMENT
mayor adams and kid rapper