Oklahoma woman steals police rifle, fires at officers after slipping out of cuffs

Rachel Zion Clay of Grady County, Oklahoma was high on meth when she slipped her cuffs, grabbed an AR-15, and started blasting. 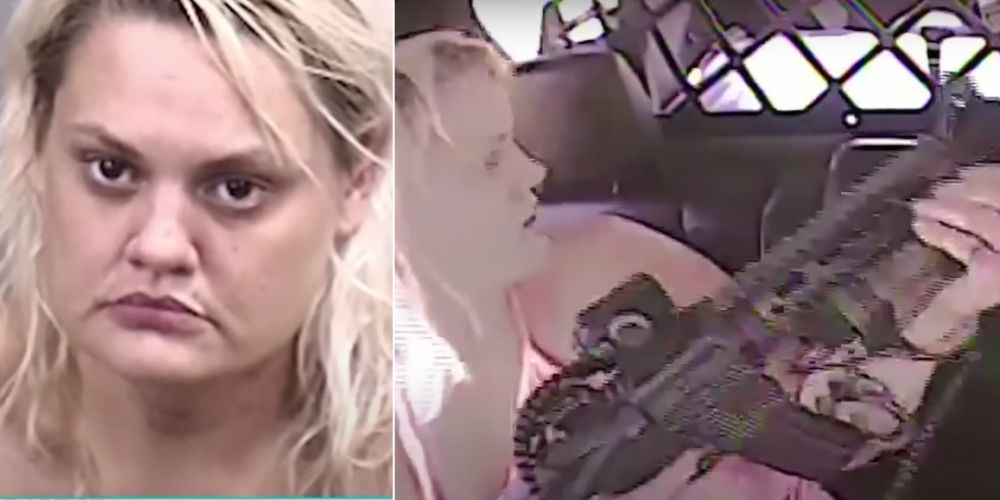 Rachel Zion Clay of Grady County, Oklahoma was high on meth on August 12 when she was left alone in the back of a police vehicle. She slipped out of her handcuffs, reached over into the console, managed to unlock the cop's AR-15, and then started blasting.

According to local news, Grady County Undersheriff Gary Boggess said, "There's several switches, one is a gun switch to unlock the gun lock and she found it, unlocked the gun lock, and was able to retrieve an AR-15 rifle. Then she was able to figure out how to put a round in it, put it on fire and she fired approximately 10 rounds at our deputies and a civilian."

Bodycam footage shows officers speaking to the civilian when a shot rings out and the man screams "Ow!" as he's hit in the chest. A few seconds after the single shot Clay unloads on the men with multiple shots, and nicks one deputy in the head, while they all ducked for cover behind a second cop car.

The injured civilian's son darted over and assisted with first aid as police called backup and EMS. Clay barricaded herself in a police SUV and began a three hour standoff that saw her fire more rounds from the AR-15 from time to time. The officer and civilian injuries were not life threatening and they were quickly treated at a lock hospital and release.

According to local ABC News, the police didn't even intend to arrest 36-year-old Clay. Authorities were called to a home in the small city of Blanchard in Grady County on a wellness check when they encountered the woman, who was acting erratically. Authorities detained her and put her in the back of their SUV as they followed up with a neighbor.

Undersheriff Boggess said, "While in the back seat of a patrol car, she was able to get her wrist free from the handcuffs." Boggess said the cuffs were put on properly despite Clay freeing herself from the restraining device. Cop car footage from inside the vehicle shows Clay slipping her hand free from the cuffs before grabbing for the rifle.

Fox News reports that Clay is being held on a $1 million bond at the Grady County jail and is charged with "shooting with intent to kill."

Boggess said the police squad is going to make some changes after the incident.

"We're going to put a switch someplace else in the vehicle to lock our gun. It's a freak deal," he said. "I'm not going to say one in a million, but you know, it's one of those deals that, you know, once it happens, then you go back and try to make sure it never happens again. That's what we're looking at."