Only 40 percent of Canadians believe Canada is on right path with Trudeau as PM: Poll

Four in 10 Canadians believe the country is on the right track with Justin Trudeau leading the nation—the lowest percentage ever recorded in the annual poll. 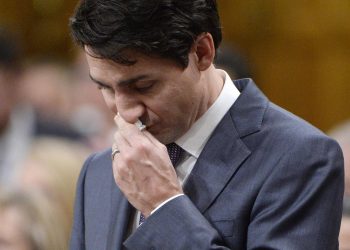 Four in 10 Canadians believe the country is on the right track with Prime Minister Justin Trudeau leading the nation—the lowest percentage ever recorded in the annual poll.

In a poll conducted by Nanos Research titled The Mood of Canada, the Institute for Research on Public Policy reveals that Trudeau’s approval rating has slid with each passing year the Liberals have been in power.

The numbers are a significant slide for Trudeau, who upon his election in 2015 had a sizable 60 percent “very or somewhat good” score, while 13 percent believed it was average, and only 23 percent said it was “very or somewhat poor.”

Nik Nanos believes the big drop is due to the government having to make tough decisions that are bound the disappoint somebody.

“As soon as any government starts to do things and has to make decisions about the big files, you’re likely to disappoint someone,” Mr. Nanos said to The Globe and Mail.

“I think whenever you try to satisfy both sides, usually both sides are dissatisfied,” Mr. Nanos said.

Nanos pointed to Trudeau’s compromising approach with being green while also promoting the resources sector. While the Liberals have brought in controversial carbon-pricing taxes that win over the environmentalist crowd, they have also been pro-pipeline, a stance that may have a more significant negative impression on environmentalists.

Nanos conducted the survey of 1,010 Canadian adults by phone and online. The survey has a margin of error of 3.1 percentage points, 19 times out of 20.