The debate touched on several topics of interest to voters across the political spectrum, including poverty, Christian persecution, human dignity, immigration, refugees, and the environment. 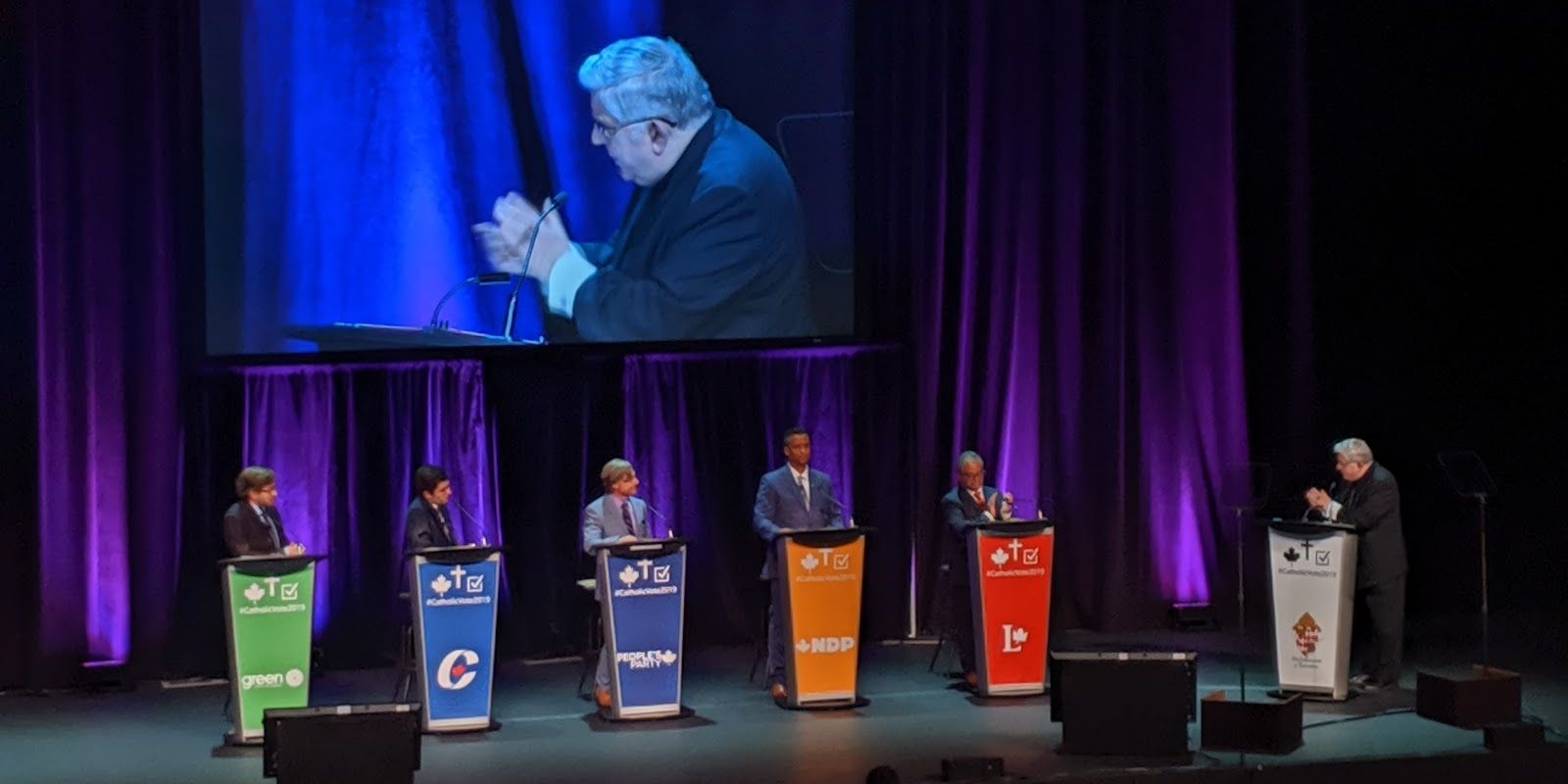 The Archdiocese of Toronto held a debate Thursday night with participants from the five major parties (outside of Quebec) to discuss a wide variety of electoral issues from a “Catholic perspective.”

Moderated by veteran political journalist Don Newman, the debate participants from the Green, Conservative, PPC, NDP and Liberal parties squared off in front of a crowd of 1,200 in the John Bassett Theatre in downtown Toronto, the largest live audience for a federal debate so far this campaign season.

The debate touched on a number of topics of interest to voters across the political spectrum including poverty, Christian persecution, human dignity, immigration, refugees and the environment.

The Archdiocese of Toronto is the largest diocese in Canada, containing two million Catholics and 225 churches in an area stretching from Toronto to Georgian Bay.

After Cardinal Collins made opening remarks touching on the need for civility, a healthy democracy, and people of faith having a place at the table, the debate got underway.

The following is a brief synopsis of each candidate’s answers on the five major topics covered in the debate. You can watch the full debate here.

In response, Genius said the Conservatives plan is to lower taxes for the poor, review mortgage stress test and bring in 30-year mortgage for first time home buyers.

NDP candidate Green suggested the solution is a national housing strategy, the production of 500,000 new housing units over 10 years and $5,000 rent subsidy per year to help with the cost of rent.

On the other hand, the Green Party candidate said the party hopes to ensure that safe, secure, affordable housing needs to be a human right, combined with a universal basic income, this plan hopes to reduce poverty nationally.

The newcomer PPC candidate Haskell reiterated that provincial and municipal governments control supply, but a federal government could help by lowering immigration to decrease demand.

Sorbara defended the Liberal record, claiming 900,000 Canadians have been lifted out of poverty over the last four years, in addition to a national housing strategy put in place.

On religious freedom, Haskell (PPC) talked about a British report on global Christian persecution showing that Christians are the most persecuted group around the world. He claimed that his party will prioritize Christian’s rights abroad and at home. Haskell also called out politically correct culture for silencing a defence of the Christian faith, citing the example of Elizabeth May being rebutted for saying Jesus was her “hero.”

According to Genuis (CPC), the party would bring back the Office of Religious Freedom, fight against the Liberal Summer Jobs values test, and defend persecuted minorities around the globe.

Turcotte (Green) said his party will protect religious liberty by giving people their basic needs so they can live their lives freely.

Incumbent Sorbara (Liberal) touted his relationship with refugees in his riding, his record in representing them, called the Office of Religious Freedom “ineffective,” also adding that Scheer’s cuts to foreign aid are a “shame.”

Green (NDP) called out Bill 21 in Quebec and said an NDP government will stand “loud and proud” with those fighting against it.

The NDP said it will protect conscionce rights on euthanasia, push palliative care. They also said Catholics care about more than just abortion and questioned why the Liberals broke their electoral reform promise.

The Liberals affirmed their support of a women’s right to choose, noted that nobody is opening this debate and focused on providing subsidies to help women even further.

Additionally, the People’s Party of Canada’s representative claimed full party support for free speech, including speech about abortion. He noted that one of their candidates is planning to bring forward a private members bill banning third-trimester abortions.

The Green Party’s debate participant called for the need to look at root causes, focussed on the need for universal pharmacare to help women and look out for “health and safety of these children.”

“Pope Francis could not run for the NDP or LPC,” said the Conservative Candidate because of their ban on pro-life candidates. He called them out for “drumming pro-lifers out of public life.” He also stated that pro-lifers are welcome to run for office in the CPC. He also stressed conscience rights and free speech, and also committed to a free vote on abortion legislation.

On the issue of immigration, the Conservative candidate said that immigration is best done with community partnership. They will lift caps on the system and strengthen support for private sponsorship.

According to the Green Party candidate, Canada will be getting more “climate refugees” in the near future, suggesting that we need to expand immigration.

The Liberal candidate said that they are proud to support the global refugee sponsorship program and that the party will be quadrupling private refugees by 2020.

The NDP touched on his ancestors being the first refugees to Canada (slaves fleeing the U.S. via the Underground Railroad). He said that Canada needs to be more welcoming and we need to stop harmful “right-wing rhetoric.”

The People’s Party candidate agreed on the private refugee plan by the CPC, noted the need to focus on stopping illegal immigration and getting out of the UN compact for global migration (need more freedom to make our own decisions).

The Conservative candidate claimed that all parties have the same targets, just disagree on tactics. Their party will institute tax credits and green tech investments. He suggested Canada still needs to build pipelines because it’s the most efficient way to transport the world’s cleanest oil and get off of Saudi supply.

The NDP claimed that we only have 11 years left until climate change is irreversible. We need a big plan to stop that — they will create 300,000 climate jobs while also keep communities together.

According to the People’s Party candidate, their top priority is clean water for indigenous ppl, as well as focusing on top issues like clean air and water. He reiterated that they were not climate deniers, but there is “room for doubt.”

The Green Party candidate suggested we need to end dependence on fossil fuels, expand east-west energy grid for EVs and be a climate leader on a world stage.

“No plan B for the earth,” said the Liberal debater. He suggested we must use innovation, a price on pollution (carbon tax), and subsidies for electronic vehicles to stop climate change. He also suggested that Canada can do this while still buying a pipeline because the environment and economy go hand in hand.

Following the debate, The Post Millennial was given clarification from CPC candidate Garnett Genuis on remarks Conservative leader Andrew Scheer made earlier this week on funding international abortions:

Genuis said that while a Conservative government would have to respect any legally binding obligations, they would not be using taxpayer dollars to fund a “divisive issue” like abortion internationally and would instead focus the funding on “improving access to clean water, nutrition, and helping children in conflict zones.”

Speaking on the issue in 2014, Harper told reporters “What we have been trying to do since 2010 is build broad public and international consensus for saving the lives of mothers and babies. You cannot do that if you introduce that other issue. The fact of the matter is it’s not only divisive in our country and in other donor countries, it’s extremely divisive in recipient countries where it’s often illegal.”

Despite abortion’s illegal status in many African countries, the Trudeau government has continued to fund organizations like Marie Stopes International which has been found guilty of carrying out illegal abortions in countries like Zambia and Kenya.

Mr. Genuis, who questioned Foreign Affairs minister Chrsytia Freeland on this issue at a House of Commons committee last year, called the Trudeau government’s policy on this file “concerning” and said that a Conservative government would not be “initiating funding projects that would reopen divisive issues.”