A New York City funeral for a deceased rabbi in Brooklyn's Borough Park neighbourhood was broken up by police on Thursday. 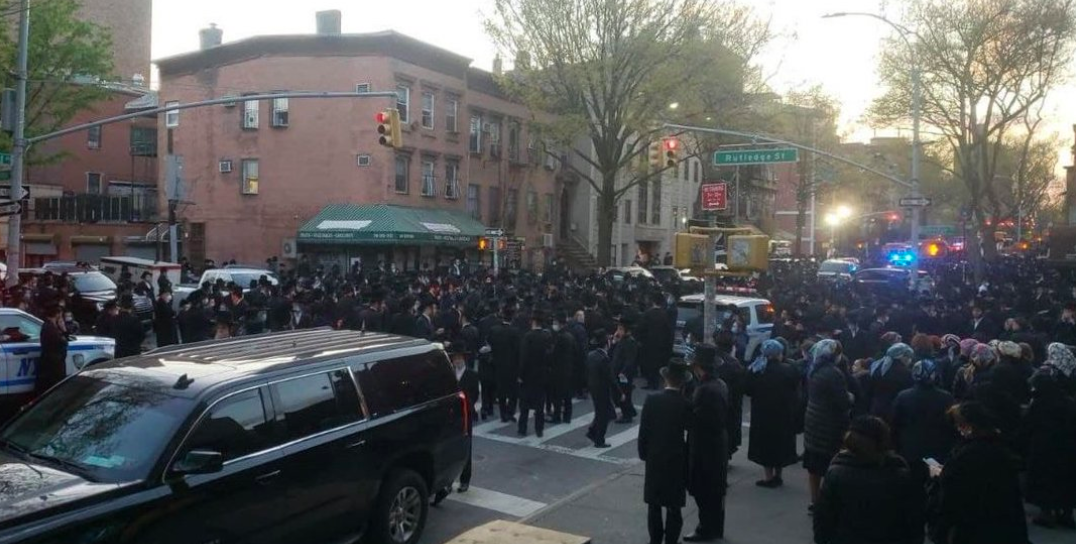 A New York City funeral for a deceased rabbi in Brooklyn's Borough Park neighbourhood was broken up by police on Thursday. Videos posted to social media showed NYPD officers in masks chasing a mini van through the neighbourhood and shouting at the attendees to disperse, according to Fox 5.

New York City's Hasidic Jewish Community was criticized by Mayor Bill de Blasio on Twitter earlier this week, after they gathered in Williamsburg, Brooklyn for a separate funeral. The mayor has been frustrated at these funerals because they break with the city's social distancing measures. De Blasio's tweet was met with a strong backlash online with some calling it outright anti-Semitic.

During the altercation at the recent funeral, one 17-year-old boy was taken into custody and issued a summons for disorderly conduct. Sgt. Mary Frances O'Donnell, a spokesperson for the police, said he was accused of pushing a police official.

Mayor de Blasio said the funeral was "absolutely unacceptable." The city has banned all gatherings, regardless of their size, as the City has already endured 18,000 coronavirus related deaths in the past few weeks alone.

Many feel as though de Blasio has been singling out the Jewish community when it comes to his frustration with New Yorkers not adhering to social distancing protocols. On Thursday, Republican Senator Ted Cruz wrote Attorney General Bill Barr asking the Justice Department "to closely monitor New York City" to see if any religious discrimination is taking place, following the de Blasio's tweets.

De Blasio was called out by State Senator Simcha Felder on Twitter as well. The State Senator, who represents Borough Park wrote, "terrorizing people by sending in armies of cops during such stressful times is not helpful at all. @NYCMayor - we need real leadership. Stop the chaos now.”

The founder of the group Americans Against Anti-Semitism, Dov Hikind, said that while he's been told that de Blasio is cracking down on anyone who is breaking social distancing rules and not solely the Jewish community, Hikind has still requested data from City Hall to make sure that is in fact, the case.

Hikind, a former state assemblyman, still feels that de Blasio's tweets "crossed every line" when it came to singling out his community.

“It encourages anti-Semitism and scapegoating of the Jewish community,” Hikind said. “The mayor played right into the hands of the anti-Semites. I know that was not his intention. I know he’s a decent guy. He didn’t have the decency to just say the simple words, ‘I’m sorry I made a mistake.’”

Approximately 2,300 people have tested positive for coronavirus in Borough Park so far, making it the sixth most highest rate of any ZIP code in New York City.

Hikind said that despite the recent funeral, the amount of people violating the social distancing laws within the Jewish community is relatively small in comparison to those who are in compliance with it, as one of Judaism's central tenants is to preserve life.

“I’ve begged and pleaded with the minority that exists within our community that don’t give a darn — don’t give a damn — about themselves, their families or the community,” said Hikind. “You can’t have funerals with hundreds of people. You can’t have people praying in synagogues. You can’t do those things when people’s lives are on the line. It violates everything in Judaism.”

New York has been the state hardest hit by the coronavirus, and New York City has the highest concentration of cases. Of the 167,000 confirmed cases in New York City, nearly 40,000 are confirmed recoveries, while almost 13,000 have died.