Poll: Four-in-ten who voted for Trudeau’s Liberals in the last election now disapprove of his performance

New data from the Angus Reid Institute has given us yet another glimpse of how Canadians are thinking, and these findings suggest that the Liberal ship could be headed for some very rough waters, with a large slide in support over the first half of 2019. 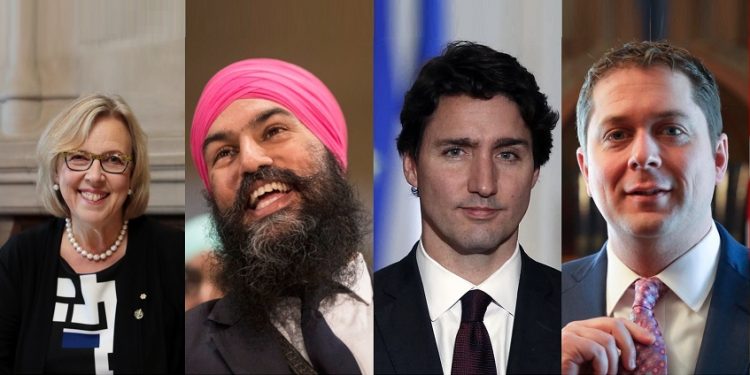 For many across the country, October will be an important time of potential change, with Canadians eager to express let their voices be heard via the ballot box. With four years of Trudeau nearly in the bag, Canadians from East to West will have a big decision on hand. Do they vote to keep Justin Trudeau in power, or is it time for him to step aside, allowing someone new to take the helm?

New data from the Angus Reid Institute has given us yet another glimpse of how Canadians are thinking, and these findings suggest that the Liberal ship could be headed for some very rough waters, with a large slide in support over the first half of 2019.

On the other side of the coin, Conservatives are looking to pull ahead from the floundering Liberals, as they try to maintain the momentum that was gained from Liberal scandals earlier on in the year.

37 percent of decided and leaning voters say they would vote CPC if the election were held tomorrow, a number which has remained steady since the SNC-Lavalin scandal unfolded starting in February.

The Liberals have held on to the support of roughly one-quarter of Canadian voters for the second straight month, tallying up 26 percent of the vote. That figure a significant drop of the 31 percent figure recorded in February, a figure that continues to drop as October approaches.

As Liberal crimson continues to fade, bright Green continues to grow. Since February, Green Party polling has seen an increase of 4 percent, which according to figures by Angus Reid, is the biggest change of any party.

That title once belonged to the New Democrats, who went from 14 percent in February, up to 18 percent in April. Sadly for the NDP, the Green’s time in the limelight may have taken away some of their thunder, as they have fallen back down to 15 percent.

With all of that in mind, it’s important to note that a large chunk of Green and NDP supporters list the Liberals as their second option. This puts the ball in Team Trudeau’s court, as they will surely be fighting over those crucial votes in the coming months.

Methodology:  The Angus Reid Institute analyzed data from an online survey conducted between May 28 – June 4, 2019 among a representative randomized sample of 4,698 Canadian adults who are members of the Angus Reid Forum. The sample plan included large oversamples in some regions, which were then weighted back to provide a national snapshot. For comparison purposes only, a probability sample of this size, with this sample plan, would carry a margin of error of +/- 2 percentage points, 19 times out of 20. Discrepancies in or between totals are due to rounding. The survey was conducted by Angus Reid Global Public Affairs and donated to the Angus Reid Institute.