More 700 homeless encampments have sprung up under Ted Wheeler's mayoralty, and there are more than 3,000 homeless people throughout Portland. 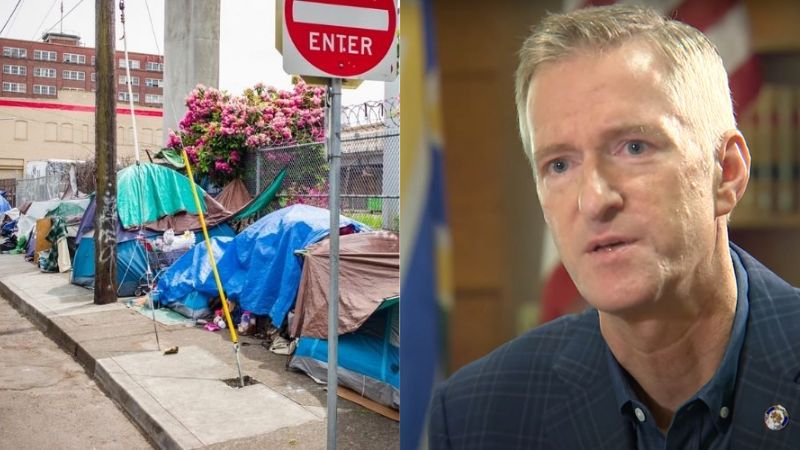 Portland Mayor Ted Wheeler announced on Friday a plan to ban unsanctioned homeless encampments in his Oregon city as homelessness has skyrocketed 50 percent since 2019.

"The magnitude and the depth of the homelessness crisis in our city is nothing short of a humanitarian catastrophe" and "Collectively, this is a vortex of misery for all involved," Wheeler said, according to Fox News.

Earlier in October during a city council meeting, Portlander Gillian Rose called on Democratic Mayor Ted Wheeler to take the homeless issue seriously, however he simply laughed off her concerns that the encampments posed a safety risk.

Under Wheeler's mayoralty, more 700 homeless encampments have flourished within roughly 146 square miles and there are over 3,000 homeless people throughout Portland.

Wheeler's plan would create "designated alternative camping sites with services" where the homeless could receive counseling for drug and mental health related issues.

The Portland mayor also said he plans to build 20,000 units of affordable housing over the next ten years and said it is a "foundational solution" to the problem.

In September a woman found a random homeless woman sleeping on her son's bed after the vagabond walked into the home.

According to the Daily Mail, Portland residents are considering "abandoning" Democrat leadership, who have governed for 40 years, in the wake of the homeless and crime problems.

The topic of homelessness is one of many animating voters in the upcoming gubernatorial election between Democrat Tina Kotek, Independent but liberal Betsy Johnson, and Republican Christine Drazan.

In September, a group of Portlanders with disabilities sued the city for violating the Americans with Disabilities Act, claiming the city had not done enough to keep sidewalks clear of homeless encampments which have been allowed to proliferate across the city. The ADA bars discrimination based on disability and requires sidewalks to be accessible to everyone.